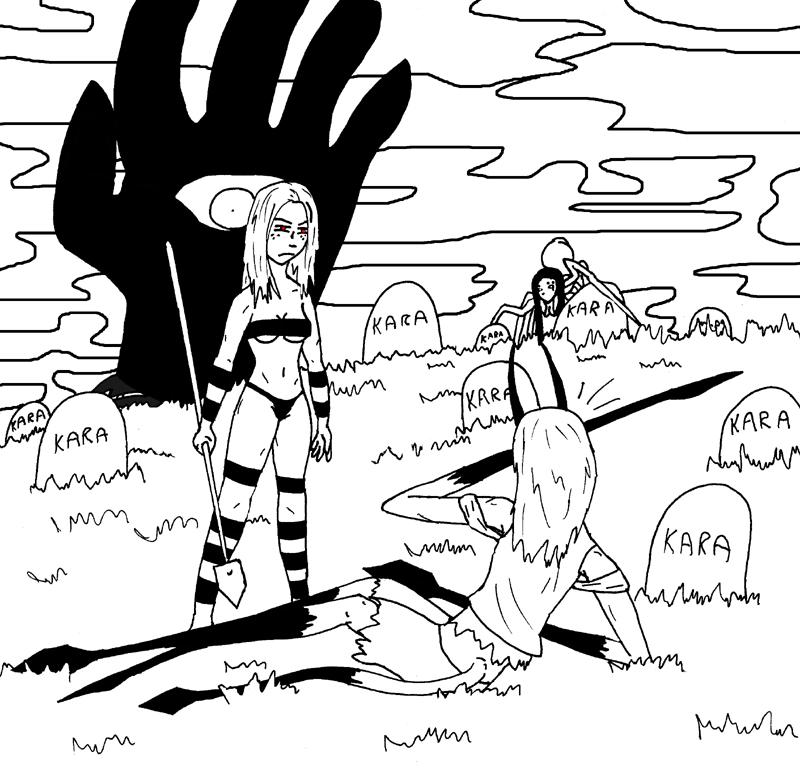 "Thirty seconds. You couldn't even give me thirty seconds for all the running of your trash talk. It wasn't even thirty seconds... before you wound up flat on the ground. It's pretty hard to stand up when your hands and feet are just stilts with shovel heads, isn't it?"

"Then you should have no problem standing up before I bash your goddamned skull in, right? Well? Go do it. Move. See where it gets you."

The spade devil just stared. One arm could be raised to block such a swing, but the remaining three limbs were very gangly. Even being pushed off balance would knock her down again, let alone a direct hit.

"And this is what you ultimately became? Seems like a design flaw. Or idiocy. I don't know which represents you best. But, you've been a hot pile of failure from the start, haven't you?"

"YoU kNoW nOtHiNg AbOuT-"

"Give it a rest. You're not mysterious or complicated. You're an asshole, pure and simple. You were enabled by our Aunt Ruukunda and in turn, Chernobog. Otherwise, you'd be some mediocre peasant farm girl. Like I thought I was. But that wasn't enough, was it? Regardless of who contacted who first, YOU went to seek out Outer Hell. YOU thought you could control that thing. YOU got everyone killed. Surrounded yourself with those geists to protect you, because at the end of the day, you're not just bored and screaming for whatever freedom you thought you lacked... you're a friggin' coward. You were literally nothing of note without the geists or whatever Outer Hell could do to make use of you. And even then, Bali-la still kicked your ass then. Without all of this 'stuff' given to you, you're a painfully generic nobody... an overgrown brat."

"You projected all of your personal failings of me, left me with a ragged distorted history to call my own, and then still get angry at me for not living up to your invisible standard of how I should conduct myself. You think I'm going to accept you as some all knowing, competent source of anything? Bali was right to purge your arrogant ass. Did you do anything in your life to make the world a better place for yourself without leeching off of others? Heck, did you ever just try to improve yourself? You were enabled from the start. You have no right to look down at me, Kara. Not in the way that I look down at you."

"That's one of the stories of my life, isn't it? 'This is not me.' You want to know? You set this up as some vaunted ambush, more or less. But this is my mind, isn't it? Everything here, except for maybe you, myself, Metis, and.... isn't here. But I am. This is my mind, my soul, my damage. I live this every day, Kara. You just see the parts you want. Yes, I'm not like Tulsan or Beltresz. In the real world, I'm a neophyte on all fronts still. I'm just trying to keep up with people like them. But here? Bitch, I'm a goddess. My will is law here, Kara! See, what you don't get is I'm not afraid of you. I don't even respect anything about you. And all around me are any number of tombstones I'm going to plant your carcass under, like a proper shovel witch. Like I said, you're a failure. This isn't a trap, not yours anyway. This is your last karmic humiliation before no one cares about who you were anymore."

The spade devil watched a feral red glow manifest in the shovel witch's eyes, staring down at her oppressively, filled with disgust and contempt. The titanic black hand of Chernobog watched over her shoulder from afar, looking with disappointment and loathing towards Kara.

"I will reach Uluru. I will fulfill Bali-la's last wish. And I will not become you, Kara."

The spade devil looked dejected and sulked, feeling the righteous sting of Kara's glare and the baleful gaze of Chernobog. She had no allies, no other powers for all her mocking of Karolina's amateur magic use, no stratagems left. The fight had barely even begun before it ended... but perhaps it was fitting... for was that not the way of the Death Clan that Kara was to become? Not to battle, but to end the right as fast and with certainty as possible. Regardless, although the killing blow had not yet been struck, the knock off had succeeded the original.

"One more thing... Kara... now that I'm here? I know what I am. You were going to tell me a little something special, hidden deep in my soul, where I would not know it in the waking world. But here? Yes... I see. Everything makes sense now."

"Chernobog. The excessive shadow essence. My own nature..."

"You don't get to be the one who shocks the truth into me, Kara. If the truth would have destroyed me, then I would have deserved it. But I'd rather know, than not know. This is my vision, not your half conceived trap. The Mimi didn't send me here to harm me. They are teachers, in their own way. Going within myself like this... was the worst possible thing you could have encouraged Metis to do. Maybe the Mimi knew what would happen, maybe not. But the end result is this. This is my body. My spark of being. My mind. And you are just wasted potential."

"You should let me continue pretending."