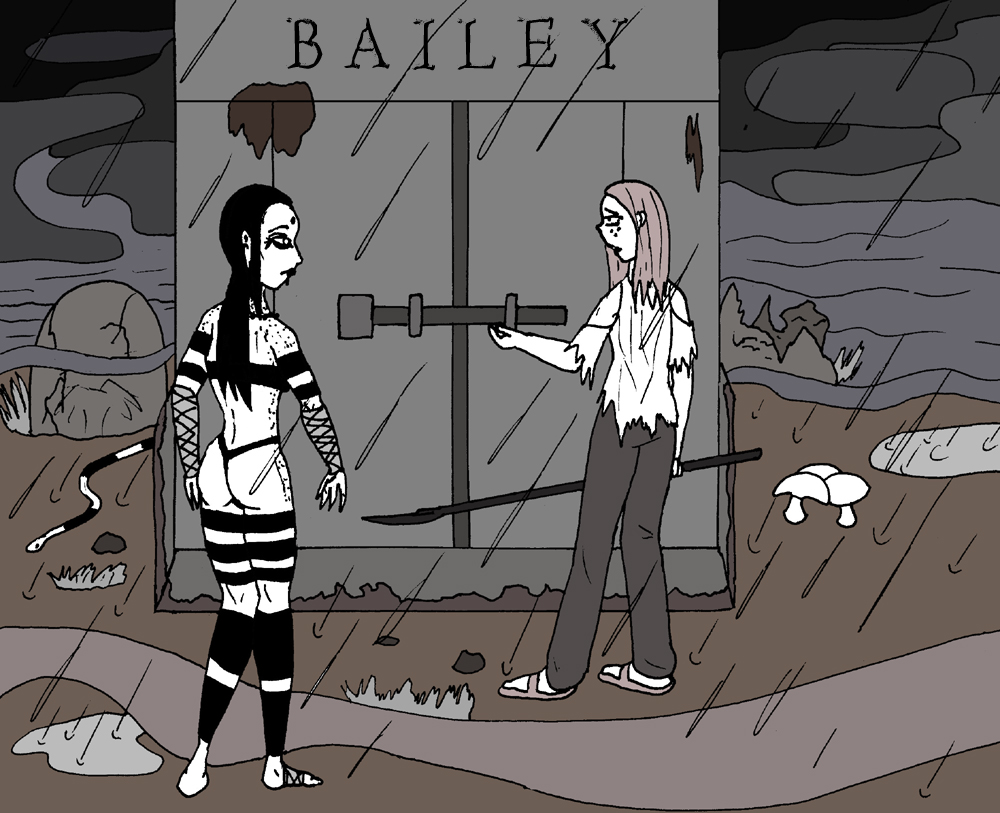 Although she intended to arrive first at the mausoleum, Karolina lingered behind for a moment to retrieve her spade. She felt naked without it, at least as far as either work or problems were concerned. But it was also a sense of familiarity in her hands, as she held loosely upon the old dirty metal haft of the implement. Why? Why was she going to tell this random Xibalban woman anything? She had some way of subtly coaxing responses out of Karolina that the shovel witch did not understand, but was no less aware of. Maybe it was those large piercing orange eyes.

The shovel's head dipped. Maybe, just maybe, the shovel witch thought, that the pain of concealing a sin had to end. And that all her life had been about self restriction and denial, amidst duty. Such were the lessons carelessly taught to her. So quite possibly, telling a relative stranger the truth could absolve a quiet ever present monkey on her back. For in all this time since the village of Adelaide was laid barren of human life, a then innocent girl remained. And in that solitary existence that followed, she had no one else to assign her guilt and blame when a serious mistake was made. In this Xibalban, however reluctantly she might tell the truth to, she had someone to damn her. In her mind, being berated would set her free of her secretive shame and self loathing. Wiping either a tear or a lingering raindrop from her cheek, she made her way downstairs.

Being outside right now was risky. Both of them knew of Geists and the perimeter's light was minimal within the storm. Yet, the shadowy things concerned neither the approaching shovel witch, nor Bali, who had been patiently standing in the rain. Risk taking came naturally to Bali. It made life fun. Worth living and doing. And while she didn't act upon every whim or curiosity that came along, she concluded that Geists might have had vision issues in bad weather too, to say nothing of the pooling wet ground that might telegraph their otherwise quiet steps. In any event, she had neither seen or heard of any yet. And it wasn't as though the ground was crawling with them like ants either.

Standing near the foot of the mausoleum, she observed an interesting script etched into what previously seemed like the white stone of the drab looking structure. They were clearly human letters. Curious of them, she inquired to Karolina as the girl approached with her spade in hand. Bali noted she seemed somehow less robotic than she had been on the roof top of the light house, but under no less strain.

"Hm? The etching?" Karolina glanced at the mausoleum briefly, wondering if she missed something not obvious. "What, you can't read that?"

Bali-la shook her head sheepishly and shrugged. "I don't know how to read human languages. I understand there's been a lot of them."

"Oh..." Karolina observed, not having considered the possibility that Xibalbans might not have been taught common modern written languages. "It says 'Bailey'."

"Isn't that your last name...?" asked Bali with a raised brow.

Karolina sighed and nodded, shaking rain water from her straightening hair. "Well yes, I suppose it does. Mm, my father built this crypt as a side project. The idea is that even if we passed on, we would still symbolically watch over this graveyard as a sign of our commitment to the town. But, um, don't get the wrong idea. Neither my ma or pa were ever interred there."

There was a sound of chains from within the building again. Bali watched her companion uncomfortably.

Karolina ignored the distraction. "I never found enough of them... after everything happened. And the crypt was damaged. I wanted to bury them as quickly as I could... so I did. As for the mausoleum, it was never finished in the first place and while I might be a good ditch digger, I'm second rate at patching up stone architecture. I'm not sure it represents anything now."

"Alright, so..." Bali began with a pregnant pause. "Who or what IS in there?"

"Grave digger first, witch second," Karolina darkly repeated, paraphrasing herself from earlier. "You're welcome to think whatever you want about me, Bali. I won't blame you. But..."

Karolina began to begrudgingly remove the rain swollen wooden blocker over the stone doors. "I thought I could... well, I tried to 'fix' Adelaide. I betrayed everything that I am, that I stand for, on one fleeting chance... like some kind of fool. And then I had yet another problem I couldn't repair altogether. And all I could do from there on was try to ignore that I did anything wrong at all."

The doors were flung open by the shovel witch. A damp musty smell poured out of the opened crypt, and behind it with the sound of clanking chains, something with unyielding red eyes gazed out upon the visitors.

Sorry! I'll have the next one out sooner than usual, I think.