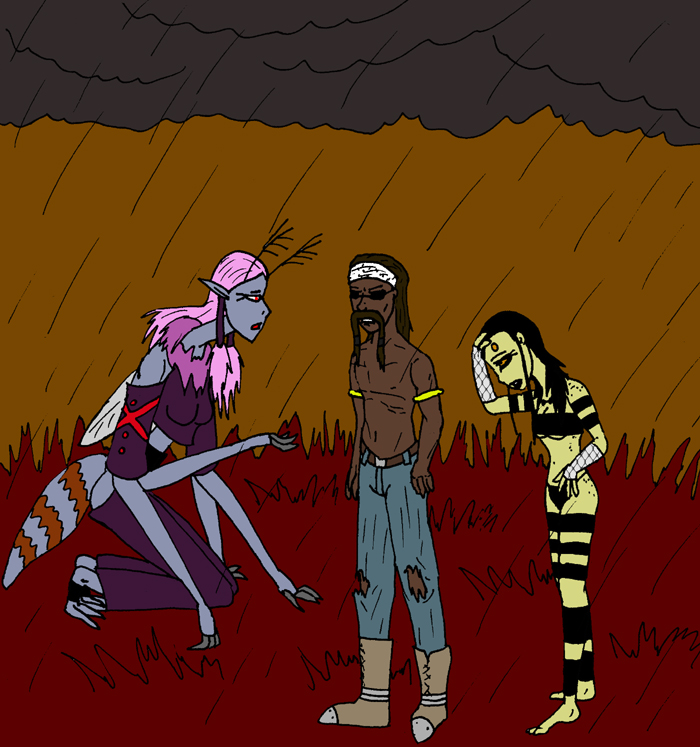 After Karolina had wandered into the horizon and Bali regained her composure, Tulsan and Astrile drew closer.

"Are you, ah, alright?" the mosquito woman inquired, crouching as a drizzle began to form from dark murky clouds above them.

Bali frowned to herself and took a deep breath. "I will be. In time. I considered her a real friend. She was my pack mate, too. And I bungled it all." Bali sighed.

"So, what just happened? I only caught the tail end of things..." asked Tulsan more directly.

"It WAS a private conversation," Bali mumbled. "But I guess it went on a bit too long." Tulsan coughed and rubbed his long mustache, a bit embarrassed.

Bali shook her head tiredly. "It's fine, really. I just caught her up on things I felt like she deserved to know. Because things had changed. She had changed. But realistically, she probably felt lied to and manipulated, amongst things. It was a lot to process and I just felt like it was the right time. Well, it wasn't."

"Maybe we should just let this be for now..." Astrile suggested, seeming sympathetic.

They stood quietly for a moment as the rain began to grow, although none of them seemed particularly bothered by it.

"Look, uh... I can see you're worn out," Tulsan began. "Maybe you should take a break from the day, especially considering the weather. We can take care of other business later, I think. Is that all right, Astrile?"

The Bloodflower conceded gently. "Of course. You know my issue is urgent, but if you can help, I want you to be in good shape for it. I know you just had some large confrontation with the gator men down in the valley. If we're going to do this, let's do it right."

Bali nodded again, not making eye contact. "Thank you... you're not wrong. I'm not... I need a little down time before we can tackle your problem. But I will honor. I just need to sleep for a bit. Maybe there's some place we can step out of the rain? I'm mentally and physically exhausted."

Astrile agreed. "I can tell. You're practically radiating stress and fatigue. I saw some tree cover across the field before. Why don't we retreat there? I'm a bit tired myself after all that flying and lifting. I don't really have the stamina I used to."

And so, they left the pepper grass field seeking cover and respite. Bali held herself wearily as she walked, but glanced behind herself at one point. "Kara..."