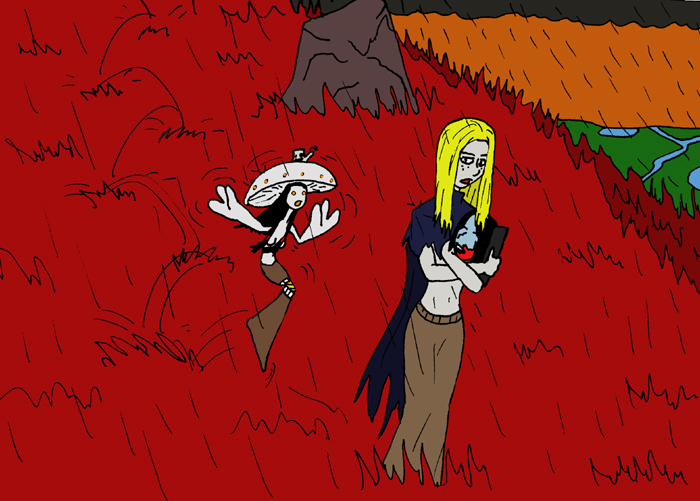 Down the pepper grass hill on the other side, Karolina walked back the way she first came. Able to use Blood Sensing, her destination was nothing less than Adelaide itself. She was numb. Confused. And mentally fried. She wasn't even sure Adelaide was worth returning to. If what Bali said was true, then it would be akin to a criminal returning to the scene of a crime.

The day when everyone died in Adelaide was a mystery to Karolina. She wasn't sure where she was that day or what she was doing. She thought perhaps she wandered outside the borders that day, but then, why would she do that suddenly? She'd been obedient to her parent's wishes not to leave up until she met Bali it felt like. Yet her story didn't share that at all. It felt strange, as if Bali had described someone else. And yet... pieces seemed to fit from her perspective. Did everything truly happen as she said and the hypnosis she somehow used caused Kara to forget? The shovel witch couldn't objectively tell.

How was she supposed to feel? Digusted with herself, despite remembering nothing? Angry at Bali for lying about meeting with her before and what seemed like a grand manipulation, albeit done for the best purposes? She wanted to trust Bali... they had an adventure beyond anything she knew up til this point. But now it seemed stained in dishonesty and the story that Karolina herself was a horrible monster who killed everyone around her, subconsciously or otherwise. She wished she was almost anyone else right now.

In her arms, she carried her spellbook and the head of Siouxsie, as the rest sloughed off even before the rain began. She was indifferent to the weather. The cool water felt good, technically, but she was far too distracted. In the nearby distance, she glanced at the watery domain the Longtooths called home. She knew to circle around their encampment. Part of her, however, wanted to dive in. And just end it.

Before long, she heard several sporadic rustling sounds behind her coming from the grass. Bounding like some rubbery toy, it was Rottkap and what appeared to be Tom Thumb riding atop her cap covered head. "Hey... hey, wait up!"

Karolina blinked and half turned, looking at the mushroom girl. She rather expected Zanza-Anzulu's envoy to go associate with the other three, if anything. "Why are you following me?" Karolina asked, somewhat empty sounding.

"Because..." Rottkap panted and caught her breath, probably having a hard time hopping fast in the tall grasses. "I don't have anywhere else to go. We were traveling together before, so-"

"That was a favor returned to Brand," Karolina responded. "You heard enough of what was said, I'm sure. I kind of want to be alone right now," the witch said.

Rottkap frowned. "Well, your beef is with the Death Clan woman, right? I mean, I didn't do anything. I even awoke your Blood Sensing. Isn't that worth something?"

She had a point. But Kara wasn't sure it translated into having her tag along. Not that the mushroom girl was annoying- the witch knew the mood she felt was all her own and it was making her antisocial. "Why aren't you going back to your queen?"

Again, Rottkap made an expression of displeasure. "Because I can't. You don't understand. We're grown on command and sent to do whatever is needed. And then that's it. There's no 'mushroom tribe', really. We're all just independent extensions of her will. There's no way I can go back, because there's nowhere to go to. Even she barely makes herself physical in this world." Rottkap took a deep breath again.

"I'm not proud to say it, but I'll probably be eaten by some wild animal in a week's time. I'm not like you or the Death Clan woman. I can't fight things for the most part. I'm slow. I have wide soft hands. I'm not durable. I can't even use my gift to remove disease immunity, short of Zanza herself allowing it to happen because someone interfered with her business. Karolina... unless she develops some purpose or errand for me in the future, my very existence is 'fire and forget'. And the only chance that can happen is if I happen to be the closest envoy she has to whatever she wants done."

Rottkap glanced down. "I'm not important to anything, Karolina. I'm just the tool of a high spirit. When the tool isn't being used, it sits, collects dust, and rusts, does it not?"

Karolina began to think on it. "I'm sorry... I had no idea it was like that. That sounds terrible. But-" she paused mid-word, looking at Siouxsie's de-animated head. She felt a tinge in her heart.

A tool. Made by another for a purpose. Possibly lost without direction. Did that describe Siouxsie, too? Was it right to abandon someone like that? Karolina thought about how she did in the Bailey family crypt before Bali arrived. What torture that had to have been. She could scarcely reason why she did it in the first place now.

The mushroom girl continued. "Look, I don't know what exactly is going between you and the barbarian, but I don't think you're a bad person or anything. If anything, you're braver than I am. And, well... I need to be around someone like that. Someone like you."

Karolina stood wordlessly, listening. It almost felt as if the zombie she made was speaking to her from another body.

"I want to grow up, Karolina. I want to have a chance. If my queen doesn't need me, then I want the chance to find my own interests. Tell me... how old do you think I am?"

The witch thought on it, but she honestly wasn't sure. She had no idea how to gauge such a thing with such a different creature compared to herself. All she knew was that Rottkap was even shorter than her. She had some mild feminine features, but what was adulthood for her kind? "I must admit, I have no idea."

"Roughly half a year, Karolina. It's nothing short of miraculous that I even made it this far, and that's mostly thanks to Brand recognizing my queen's reputation through me. I want to live longer. Like you. And everyone else. At the very least, I can be a good listener for you. If you want that, at least. I'll try not to get in the way either. But... if you really don't want me around, I guess that's that. I don't think the other group would take me, assuming I can get back to them in time before they leave. The man and the Bloodflower woman that Death Clan woman was talking to seemed to look at me as irrelevant."

Suddenly, a voice popped up before Karolina could say anything. It was Tom Thumb, hanging atop Rottkap's head. "Wait! Before you do anything hasty, don't forget, Brand promised to help you with your magic. And that would be through me!" said the burbling high pitched hand with a face on it. "Maybe we can be a package deal, eh? Ehhh?"

Karolina groaned. She forgot about the whole offer, but she wasn't thinking too deeply on magick to begin with. But then... hadn't that been the problem? She started to consider what her alleged story was, according to Bali. And even she knew she was ignoring magical practice.

"Not for nothing, but whatever skeletons you have in your closet aren't something I'm too bothered to call you on," Tom Thumb peeped up. "I'm in a similar boat as Rottkap here. Not that I imagine you care, but I'll probably be some animal's snack before I can scuttle back to Brand. Do you have ANY idea how far it is to his camp, when you're walking on a series of fingers?!"

"But that's neither here nor there. Look, you obviously need pointers and tips, Miss Karolina," the hand continued. "And from what I gathered... you apparently go off like a bomb if you don't get rid of some of that excess shadow essence through magick. Or did I not hear that story right?"

Kara stood there, remarking silently to herself how odd this whole situation was. Maybe it wouldn't be bad to have company back in Adelaide? And his accusation... was likely to be painfully true, if everything was as she heard of it. She didn't want to think of herself as a monster... but if she did nothing, wouldn't it be the risk of exactly that?

Stretching for a moment as the rain began to pour on them, she looked over the two somberly. "Alright... may as well come with me. There's probably no safer place than the Lighthouse in Adelaide, anyway. Just... let's keep things quiet for now. Okay? I'm not feeling real chatty at the moment."

What does one do after such a morbid revelation? That one's entire relationship with somebody was nothing but a ruse? And that one's position on the good/evil scale is much darker than one ever suspected? (For lack of a better term).