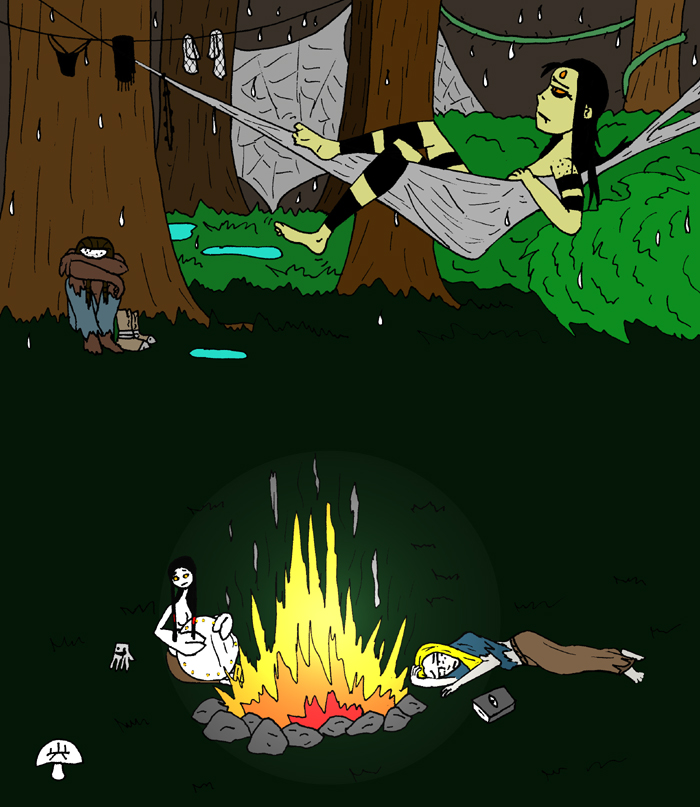 The two groups were exhausted after a long day dealing with the Longtooths. Bali needed time to recuperate before she could help Astrile, so she, Tulsan, and the mosquito woman took refuge in a modest copse of trees and bushes as it began to rain. Erecting a webbed hammock, Bali allowed herself to rest above the ground, knowing a higher position made her safer against geists, who weren't known to climb. She offered the same advantage to the others, but Tulsan grunted dismissively, preferring to curl up by himself, unconcerned, at the foot of a tree. Astrile made herself even more scarce in the canopy above, dreading being on the ground in the first place.

They didn't fully trust her yet. She understood that. It made her think again of Karolina, who in the sand cave, had few reservations about using a hammock of her own. But then, that was the issue, wasn't it? Trust. And right now, the strangers had no reason to acknowledge the unfamiliar spider woman as an ally. And her only friend, Karolina, probably trusted her even less now. Bali lay in her hammock, fading in and out of sleep, haunted by her choice to open up to Karolina. She had no idea what, if any thing, was the right choice. Because if she did nothing or if she told Karolina, at some point she had been forced to lie by circumstance. There was no joy in the burden or duty of the past's truth. Especially when it poisoned the present.

On her own, Karolina marched through much of the rain into the night. She was tired too, and her bones ached, but her mind wouldn't allow her to rest until she was dead on her feet. Traveling back to Adelaide served as a distraction, even if she hadn't made the entire distance yet.

She set a fire to keep the geists away, who tended to dislike the light. Rottkap stayed close to the flame's aura of light, not sure if her allegiance to the the Mushroom Goddess meant anything to a geist. While she clutched her mushroom cap hat like a shield to her body, she rested little out of some anxiety. Karolina laid down upon the soft grass, but her mind was disturbed, simply replaying the last several days and conversation over and over. Her life felt destabilized and in disarray. and she wasn't certain how she was going to be comfortable in her own skin again.

Part of her missed Bali. Part of her was even a bit attracted, she knew. But she wished she never heard what the spider woman told her. The more she thought of it, the more she felt Bali told the truth. But being unable to recall any of it... and to think of what she had done. And to feel like such a fool all this time? She couldn't reason when the right time for the truth was, she realized. Only that it hurt and that this day had been utterly terrible.

I didn't want to interrupt the comic, but if you're seeing this, I wanted to let everyone know I've written a novel, now available on Amazon. It's a modern day fantasy wherein several young men must contend with having normal day to day lives while encountering extra realities beyond anything they've known. The book is called Desperate By Dusk and is available in paperback and ebook. I hope you'll check it out! Thanks!