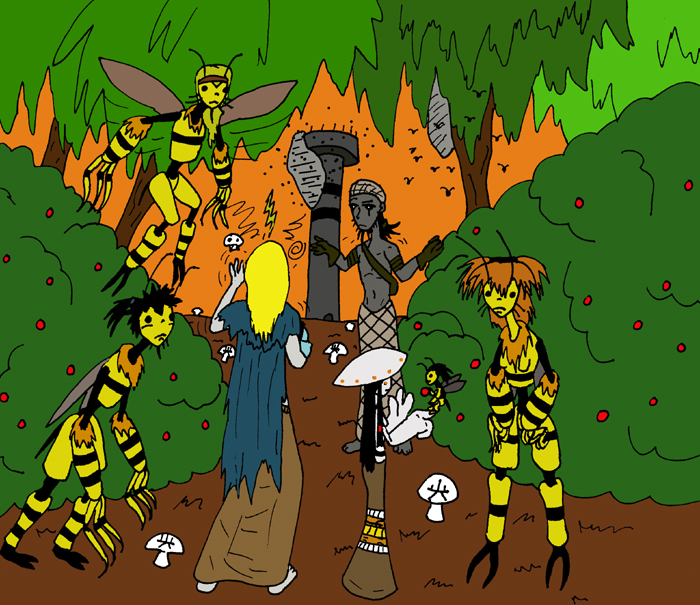 The next day, Karolina and company circumvented the Longtooth's swamp and most of the forest where the witch had been ambushed days ago. Pressing through, they came upon large bushes. Karolina recognized these as a border placement around her old town, back when everyone was still alive. And in all this time, she had no idea that berries grew upon them, having only seen one side. Apparently the locals kept picking them clean? Still, in the distance, she could see the cigar shaped light house tower amidst the sea of graves she dug. She had found Adelaide.

But before long, she was intercepted, preceded by a growing noise that sounded like droning. Three bright yellow vermin-like humanoids with orange collar tufts of fur and bodies adorned in black stripes descended from the canopy above. They wore no clothes, but all had similar looking glossy plastic-like bodies with thin black connecting joints. Their hands bore backwards fingers and their eyes bugged out, black and featureless. Most curiously were their faces. Not necessarily hideous, they were almost cat-like. Before noting the details of their limb stripes or seeing the stinger upon their backs, she quickly recognized that the creatures were likely Xibalbans of a bee or wasp-like persuasion. That said, they lacked the level of human-like semblance that Bali or even Saiya had.

Following the three of these Xibalbans, came a slate grey man who didn't resemble them, so much as an off colored human with mostly blackened eyes. This man was bare chested and lean, wearing only a cloth knit cap and a long skirt seemingly made of sun faded reeds and fishing net. His hair was black, worn in a pony tail and he was also adorned with a few accessories, such as work gloves and bicep wraps. He seemed to have nothing visibly in common with them aside from his nearly opal eyes and a peculiar pointed style of beard, which looked like small chin spikes, as one of the actual Xibalbans seemed to sport that as well.

"What's going on?" Karolina asked aloud, defensive and unsure. This was the second time in about a week now that she had been ambushed by Xibalbans without being even remotely aware of them.

The man shrugged as the winged Xibalbans merely held position, staring emptily with their cat-like faces. "Ehh, are you certain you should be here?" he asked quizzically. "This is Harrier land. I received word that a human was wandering alone in this territory. Knowing of this town, it gave me pause. Pardoning the pun, you seemed to, ugh... 'bee-line' for this town, like you knew it was here."

"What? I damn well should. It's my town. What the hell is going on?" Karolina asked, not liking the idea that she was questioned for simply returning home by these outsiders. "Who even are you?"

The man raised a brow, noting her hostility. The flyers still seemed without reaction. "Well... I am Santos, a Hivemaster for this clan of Harriers. We moved here quite recently, noting it was abandoned. As you can see from the mushrooms about your feet, the veve marks this clan's dominance of this territory. So technically, you are walking on their lands, miss."

"Huh?" Karolina glanced down, seeing white mushrooms the size of a puppy scattered around. All of them were marked with a symbol that looked like a table's profile with three prongs sticking atop it. She didn't think to investigate them as she walked by and was genuinely dumbstruck. "What the- but... but I was barely gone!"

Rottkap, who up til now had been playing with a small Harrier child who was buzzing around, also seemed to have paid no attention until the topic was brought up. "Hm? Oh. OH. Yes, this is their land, Karolina. The veves don't lie." She felt she had to say something as a natural born envoy of the very decision maker who made the veves, if just to keep up appearances. "They're the dominant force, so by Xibalban code, it's their territory."

Karolina twitched and made exasperated gestures. "But... I was barely gone!" she repeated. It had been a busy few days, but only that at the most, and certainly not more than a week. "You're telling me some Xibalban bee people came in almost overnight and..." she paused, noting the giant hive built on the side of her old light house home. "They set up shop?! That's my house right there!!" she yelled, agitated. "I can't go back to my own home?!"

Santos made soothing gestures. "Karolina, was it? I'm afraid the truth is clear and spelled out. The village was desolate of humans. To be fair, we knew of a witch who supposedly lived there, who-"

Rottkap went wide eyed and make rapid gestures to drop the subject. "Hnnnngh..." She side glanced and looked to Karolina and then back to Santos.

Karolina blinked and seemed crestfallen. "You... knew?" she asked of Santos, realizing what he was about to say.

"Well... yes. If by rumor. Most everyone around did to some degree. Are you saying that witch who, um... that was you?"

Karolina stifled a tear, looking down at her feet. "...so I'm told."

It was uncomfortable for everyone. Except for maybe the Harriers, who still neither spoke nor responded to anything. They just hovered or stood, apparently in stand-by for some order, presumably from this hivemaster fellow.

"What do you intend to do?" Santos finally asked outright. It was time to determine the situation.

Karolina said nothing at first. But she could hear Tom Thumb whispering to her, either hidden in her hair or Rottkap's. She couldn't tell.

"Hey kid... advice, but don't pick this fight. Harriers are the stress testers of other Xibalban clans. They have massive numbers usually and they embody everything everyone hates about wasps. This Hivemaster guy is like an advocate for them- looking out for them, but trying to keep the peace. He's the only thing here keeping them off our necks. Look, your issues with this scene aside, go somewhere and we can live. But we can't stick around in Harrier territory, let alone hive central for these things. I'm sorry, but... Adelaide is a lost cause right now. Sounds like your rep was the only thing keeping them away all this time."

Karolina swallowed bitterly. In her heart, she knew he was right, but it was hard to accept. This whole week was one tragedy after another, it felt like. Giving up home was even harder, especially after having come back all this way and leaving Bali... that said? How would Bali play a situation like this, she wondered?

Bali was bold. She was also a risk taker. And since she couldn't go home, it was time to go hard. There was a village saying like that, she recalled. Go hard, go home? Something like that? She knew the gist of it either way.

Looking up, her eyes turned red. To this the Harriers twitched, as if suddenly readying themselves, knowing the obvious signs of what red eyes meant. Karolina, for her sake, definitely did not want to fight three of these things, let alone an entire village. "So... you know my reputation, do you? Then you know that I have power... as a powerful magic user," she announced, remembering how Bali told her Xibalbans respected mages. Knowing what Santos had just told her, she continued, "You must also realize that with such power, I could do as I wish to anything I find to be a pest."

She felt all eyes on her.

"So that's it, hm? You take my home. I lay waste to this entire tribe before anyone can mobilize. Maybe you'll get me in time. Maybe not," she said bravely. She could feel tension everywhere. "But! Maybe we can make an arrangement that benefits us both."

"Giving up my home is significant. Perhaps... you would be willing to have one of your Harriers assist me. I know the rules of this land well," Karolina stated, weaving outright bluffs with half truths. "One of yours may follow me as a loyal soldier. And I shall be their Alpha. Surely, what is the price of one of yours for an entire town with no interference from my magick?"

'Go big or go home.' Maybe that was the saying?

Rottkap looked at Karolina wide eyed. Tom remained silent, sharing all he saw with Brand far away. It was a heck of a power play. But in Karolina's defense, she also felt she had nothing else to lose. This was not a fight she could even hope to attempt and she knew it. But if she was going to be forced to wander the wilds, wouldn't it make sense to recruit someone stronger to help out?

She glanced back and forth, a bit unnerved by the staring faces of the cat-like wasps. "Um, preferably someone I can speak with..." Did these Xibalbans even speak? Why were these three so dead silent and un-emotive? They were far more humanoid than human and she wasn't sure how comfortable she'd be with a giant bug eyed wasp person nearby. She hoped Santos would understand she wanted someone more human-like and personable.

The Hivemaster rolled his tongue, thinking. "There is... wisdom in what you say. If that is what will placate you... then yes. I will speak with the chief and advise for it, but I imagine the chief will not object to such a bloodless acquisition for an entire town's peace. Please wait here at the border to town. We will return momentarily." In moments, they retreated back inside Adelaide's borders.

"That was amazing, kid!" she felt Tom say, patting her on the back of the neck.

"You negotiated with Harriers!" marveled Rottkap. "That's not a small task at all. I'm impressed."

She felt a small tinge of pride from that and hoped things would go as the Hivemaster would suggest. But she also felt bad, as she was giving up her home town with literally no fight. Somewhere, the parent's bones still laid bleaching in the sun, as she had never managed to sort them out from the hundreds of others. 'Sorry momma... papa... this was all I could think to do for now...' she said in her mind soberly.