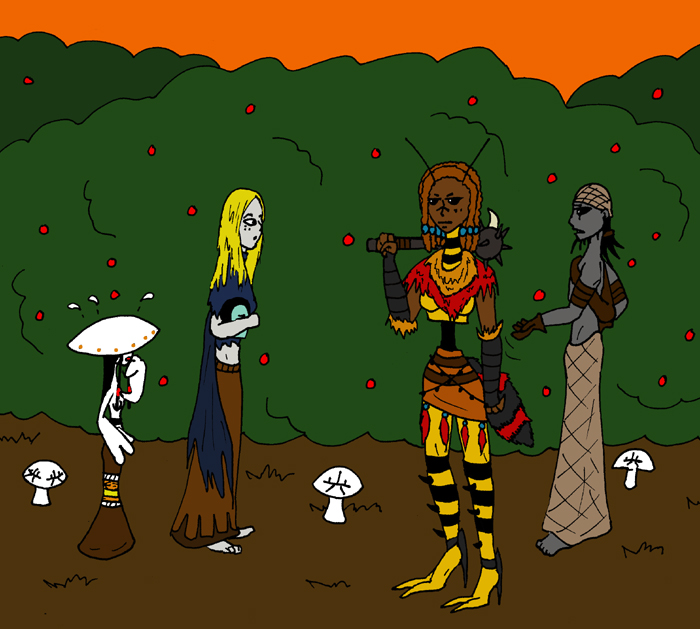 Santos soon returned, albeit without the three Harriers in tow. In fact, Karolina heard no nearby buzzing at all. Were they hiding? Karolina stood her ground, but she felt uneasy. Had they called her bluff? She exchanged a glance with Rottkap, but the little mushroom girl had little to add other than an expression of concern. The witch could see herself, a few days younger, in that very look.

Along with Santos appeared a taller woman. She didn't exactly resemble the cat faced Harriers, but she wasn't too far from their appearance either. If anything, she was even more colorful and seemingly human in places. Was this a human becoming a Xibalban Harrier, or a Harrier with some shape shifting skill trying to resemble a human?

Draped in colorful velvety fur mantles beneath her long striped neck, she was mainly goldenrod in color, dressed in a fashionable tribal skirt, leather gauntlets, and unusual pointed ankle accessories ending in sharp points, like a stiletto heel for her elevated Xibalban arches. Her waist was nothing more than a narrow black tube, thin compared to everything else, while her aboriginal skin was that of a warm cup of coffee. Her cinnamon hair was of modest length, puffy, but weighed down with large turquoise beads. Strangely, she also possessed a striped furred insectoid abdomen from her backside and no wings. Lastly, as she met the witch with glossy black eyes, the stranger held a rather nasty looking spiked mace that bore an ivory toned beak. Karolina wondered why she seemed so much more distinctive than the rest.

Santos cleared his throat. "The commanding chief here has agreed with the sentiment you proposed. One of ours will accompany you as a packmate, mage, while you forfeit right to Adelaide." Hearing that, Karolina restrained a sigh. The very idea of giving up her home seemed anathema to her. But as she looked at the apparent half human/half Harrier, she remembered hearing stories of the days before the Herald Event where possible ancestors of this person had the very land that was Australia stolen from them, too. Apparently, it was once very common around the world as a whole. Such were stories told differently by conqueror, innocents, and survivor alike.

"I am Beltresz, an Enforcer of Clan Harrier," she said formally. "I will observe your interests, Alpha. It was made known that you might prefer the company of someone more human than the others. I hope I prove sufficient. There are few others who could fit your request amongst this tribe."

"Oh, uh... hello. I'm Karolina. This is Rottkap, and... yeah," she stammered, forgetting to mention Tom Thumb, although he wasn't in sight.

Santos nodded, listening to their brief exchange. "If there's nothing else...? I have business. The work of a hivemaster never ends."

"Prosperity be with you, wise man," said the Harrier. She waited a moment, and then faced Karolina once more.

"Is... is that a head, you're holding?" she asked, noting Siouxsie's melon tucked in Karolina's arm.

"And a member of the Queen Zanza-Anzulu accompanies you too?" the Harrier mentioned, seeing Rottkap. The mushroom girl waved sheepishly. "You must be important indeed. I suppose if my people did not agree to your terms, you would have taken over the land? I heard of your power. I suppose she would be there to commemorate your victory."

Karolina frowned. "Maybe we talk about a things and get to know each other. It seems we both have a lot of questions about each other, or so it strikes me."

"Apologies. You can call me Bel, if you prefer. So, where are we heading to?"

Karolina blinked. "That... is a very good question. Hrm." She knew nothing else out here in her Blood Sensing beyond Brand's Camp, the beach, the Longtooth's swamp, and the Sand Cave. Clearly, she couldn't go back home to Adelaide. Maybe she could return Tom back to Brand? But where was that going to get her? Tom still owed her a favor about teaching her something.

"Perhaps we should begin walking, Karolina," said Bel, piping up again. "My people won't tolerate you here long term. And I'm unlikely to be your shield between them, with all due respect. If you plan to antagonize them or betray your word now, be warned- I was given perfect dispensation to stave your head in before you cast a spell, if that's your intention."

"No! No, no. I wouldn't dare. Really!" Karolina rubbed her brow. She was without a destination and wondering how in the world she got herself into this situation.