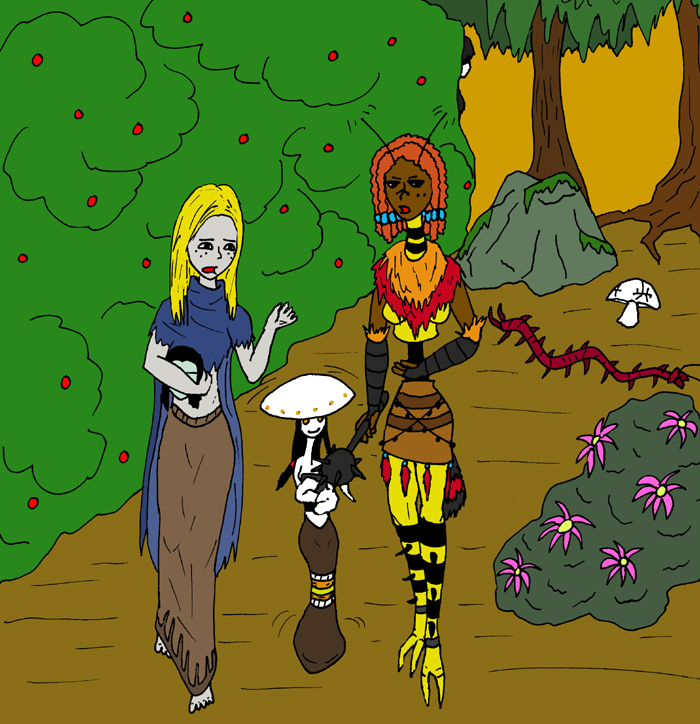 "So... tell me about yourself?" said Karolina, trying to make small talk in her usual awkward way, as they began to leave the vicinity of Adelaide, walking rather aimlessly. They assumed she knew where she was going.

"Hmm. That's not something I hear these days," Beltresz murmured. "Well, what's to know? My ancestors are from the area and they survived the Herald Event. But, you know, it's hard to survive as a human out here. Nobody has any edge against all the monsters, giant animals, and Xibalbans... but at least you can join the latter, if you make an effort. That's basically what happened to me. I know there was some human army out there, but it didn't have much of a presence here."

Karolina didn't make the connection until now that her new pack mate was or had been human. She recalled Bali mentioning something about the topic, but it seemed vague now, likely due to everything else going on. It made more sense now, that she began to reflect on it. Bali was a fairy, who became a type of Xibalban, much as Beltresz was human, but still had those aspects to herself.

"I see. So, why The Harriers? I admit, I don't know much about them in particular." Realistically, all she knew came from that brief snippet from Tom Thumb and her improvised encounter with them just now. She was hoping Beltrasz would explain why she lacked wings, however.

"I did not really choose them," her new companion began. "I mean... you CAN join a tribe as a human, if they like you. Rather, something inside of you has some inexplicable bond to their totem creature or sometimes, you develop that link. It's more of a calling. Not everyone feels it, I'm sure you realize. But it begins with a sense of estrangement from your own kind... and I guess it goes from there. Most of the Xibalbans have old ties to the native indigenous tribes out there, even if most of us didn't know it at the time."

"But, for some people, you feel and may even exhibit traits befitting one of their specific tribe totems. And at that point, either you or they tries to make contact. You just sort of 'know'. If everything goes right, you join them, usually as a supporter, and if everything clicks, you begin apothesizing. Although I don't think everyone joins a clan for that to happen- it's more the bond with the totem that matters. Or so Santos once told me."

Karolina found this interesting. A sense of estrangement? She wondered if her past life felt distant from others? Because in her memory, she certainly did before Adelaide 'fell', although she never felt a bond to any particular animal that she could think of. Maybe a supposed talent for magick hindered the process? Or maybe she was just too non-Xibalban to have made the leap? Meeting Bali for what she thought was the first time, their worlds could not have been more seperated, really.

"What's apothesizing?" Karolina finally asked, losing herself in the topic.

"That's when you become one of the Xibalban tribes people," Rottkap said, piping up cheerfully. "Or a barbarian, as they're sometimes called. You see how Beltresz has those wasp-like features? It's a form of innate transformational shape-shifting into a new body."

"That's basically it. Although, I'm not apparently based on a normal wasp or a bee like most Harriers. Turns out the Velvet Ant, which is a kind of a usually wingless wasp, answered my inner call. Kind of an outside possibility, I guess... but they're a satellite family for the Harrier tribe. (sigh) I had really hoped I could have been able to fly, you know?"

Wingless wasp? So that explained it. "Sounds like you don't enjoy being a Harrier in some ways?"

Beltresz frowned. "Ehh... it's... complicated. I'm not against it, but... never mind. I'd prefer we not talk about this right now, with all due respect."

"Okay, I understand. I apologize for bringing it up. I didn't know it was a sore spot."

"It's fine... it's just not for introductory conversation, you know? Like I said; complicated. Hrm. So let me ask you something, miss Karolina... again, where are we going?"

"Oh right... well... I'm hoping one of you might know of a place. I came back to Adelaide so I could take some time, clear my head, and maybe really start studying magick. Bel, I'm not proud to admit this, but there's everything to suggest that I'm responsible for geists being in the world. I just... wasn't aware of it until recently."

The group came to a stop.

"YOU made the geists?" Bel asked directly, leaning in.

"Everything seems to suggest it. Like with you- long complicated story. But anyway... the point is, I feel bad about it. I've done a lot of things I shouldn't have. 'Hurt people'..." she winced, dodging the thought of her older self killing the people in the cabin for no reason. "I want to believe there's a way I can make things right from what I did. And I believe studying my spell book is the key to this. I can already repel the geists- but maybe I can do more. And then there's Siouxsie here..."

She looked at the zombie's head in her arm, trailing off her words. Siouxsie's brief existence into calling her and Bali 'friend' had stuck with her, especially after she had mistreated Siouxsie for so long, ignorantly. She couldn't even blame that on her past self.

"Was she a friend? I didn't want to say anything, but I thought you were carrying around that head for intimidation purposes?" Bel asked.

"She was... a friend. Of my own making. And I was too stupid and incompetent... to see it," said Karolina lowly, her face tightened. "Maybe I should let the whole matter rest with her. She didn't deserve anything that happened. But I feel like I only caused her suffering. And she still called me friend."

Karolina raised her head slowly and took a deep breath. "I think I need to learn to be one. That's one of my problems. And if it's possible, I want to make things right with her. Because I'm not much of a person. I've been a coward, a critic, and a fool. And all I've done is hurt people, directly, indirectly, or otherwise."

Bel listened curiously. "I'm not sure I fully understand, but I admire such words, miss Karolina."

The witch turned and looked to her. "Just Karolina. Not miss. Not Alpha. I know I'm almost a complete stranger to you. Heck, even to you Rottkap... but I'll try to be a decent person with both of you. I apologize in advance if I stumble a bit. I'm really good at that part."

The mushroom girl smiled and bowed. "I'd like that, Kara."

Beltresz seemed confused. "I feel like I walked in on something midway... but all right. Just Karolina. Or Kara, perhaps?"

The shovel witch smiled. "That sounds good," she said, extending a free hand. Bel again seemed perplexed, but decided to go along with it. Rottkap's doughy hand joined in a mutual shake as well.

"Well, since that's settled... I may know of a spot that could work for you, Kara," Bel offered. "There's an abandoned little fishing cabin some distance from here. If you want, I can show you the way. I discovered it in passing a few years ago. The area isn't too noisy, for the most part, except for tree frogs."

Karolina smiled widely. "By all means. Thank you, Bel."

It was time for the shovel witch to turn over a new leaf. Through her adventures out of Adelaide thus far, she learned of courage, trust, the face of honesty, tolerance, and a sense of adventure, even if she had not fully embodied these things yet. But she understood much more than since she left. Taking time to appreciate that, it was time to start following her own destiny and with any luck, find a way to rid the world of the geists that lurked within it, no thanks to her original incarnation.

That said, again none of them had realized it, but they were being observed. It was the silent stranger from Brand's camp, that only he had noticed. The grey shrouded figure eaves dropped from behind a berry bush, seemingly unconcerned of the dominant tribe in the area. Saying nothing and making no presence known, the stranger waited until they moved on through Bel's leading and then gradually followed in their wake through the underbrush.

As much as I dislike to do this, I think I'm going to skip this week's update. I'm very taxed at the moment between work, taking care of my wife post back surgery, and a few other things. My mind is just not in the game at the moment, so to speak. Let's see what next week brings. Sorry.