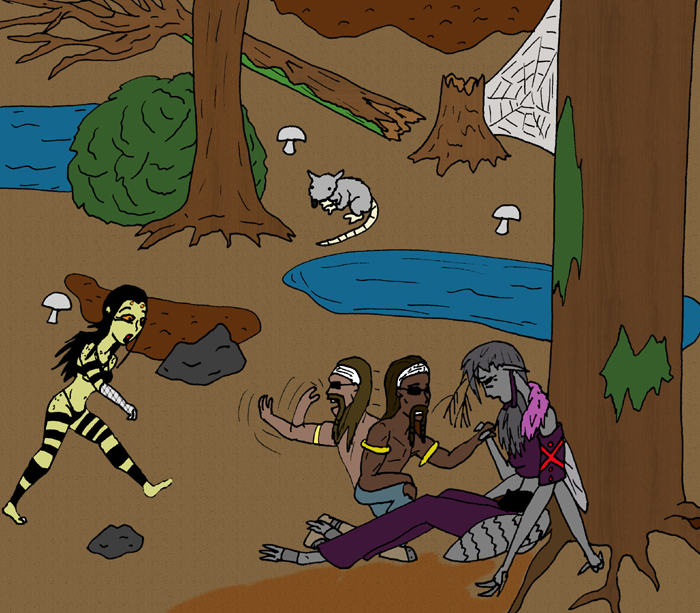 It was just after dawn when Bali stirred from her slumber. She couldn't make it out, but it sounded distressed and a bit distant. Rousing herself from her web hammock, she slipped on her modest cover and wandered towards the sound, as she focused on waking up and triangulating the direction.

The sound turned out to be Tulsan's rough sounding voice and the only thing he shouted was her very name, which certainly got her attention as she grew closer. Having left his resting spot at some point, she found him and the large slumped form of Astrile. Tulsan alternated between beckoning Bali to hurry over and holding one of Astrile's hands as she rested feebly against one of the woodland trees. "It's going to be okay, just try to keep it together..." Bali heard him speak to his friend in an attempt to comfort her.

Astrile was in bad shape. Her form sat languid and sick. Her skin and hair had turned to the color of underworld stone; a sure sign of shadow poisoning. Her shadow infused infection from before Bali met her had progressed strongly overnight. Perhaps the day's prior events sapped what remaining stamina she had left. Left alone, there was almost no chance of surviving it. It was the closest thing any Xibalban would know to a disease that could normally affect them.

"Bali! It's bad!" said Tulsan aloud. "I found her here not long ago. She must have started turning overnight. Astrile! Astrile! Focus! Can you hear me?"

Bali slid adjacent to Tulsan and examined Astrile. "Damn... you're not wrong. She's not going to make it to mid morning at this rate. Her eyes are black and I can see shadow ichor in her mouth. We have to take care of this now or it's all over."

Tulsan was understandably stressed. It was more concern than Bali had seen of him yet. "Yes, great, wonderful!" he said impatiently. "What in the world do we do? I don't know how to save someone from shadow poisoning. You said you can really fix this?"

"Yes," Bali said, taking everything into account. "I'm going to need your help, however. This is going to be difficult to do alone, otherwise."

"Set up a fire as fast as you can. We need to keep her warm and the light will slow the infection down."

"I can do that, but... shouldn't we take her outside the woods then? Get her into sunlight?"

"It wouldn't hurt, but we don't have the time to move her and we have cover here. I also need the fire to conduct the ritual to cure her."

"You said you were willing to help? Whatever it took?"

"Good. Because you and I are going to the Dream Time. We're going to deal with her shadow poisoning head on. I can't do anything here without the Song fully within my throat. So, we'll tackle the manifestation of the shadow poisoning in the realm of the spirits."

Tulsan blinked, caught off guard by the mention of the Dream Time, a powerful ancient legendary place of being to his people. Was she telling the truth? He had heard of old bonds between his folk and the early Xibalbans. Could she truly bring them there? Seeing no other option either way, Tulsan did as he was told and gathered wood to create a fire for the ritual.

Bali caressed the Bloodflower barbarian's cheek. "Don't listen to that part. That's the shadow talking. You're a Xibalban... you're tough, you can do this. We'll get you out of this. Just focus on staving it off. Hang on. Tulsan and I won't abandon you to it."