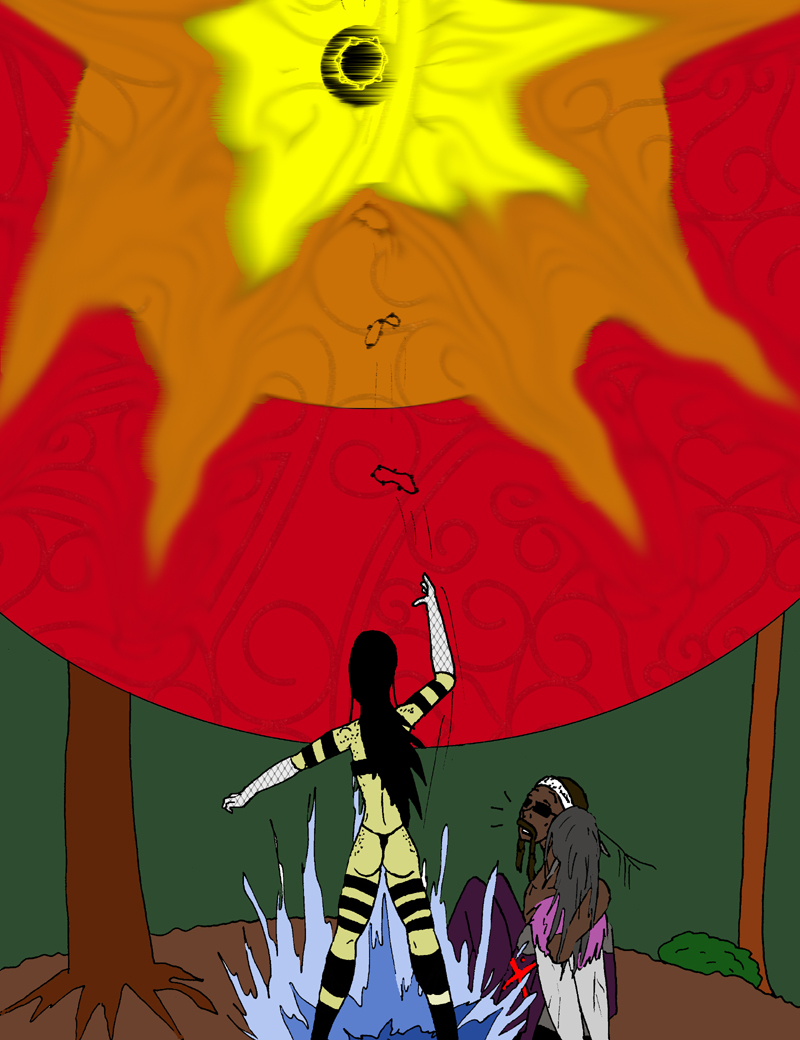 Quickly, Tulsan readied the fire. Although Bali didn't know it, he was an experienced outdoor survivor and was well versed in the techniques and necessities it took to make it alone in the wilderness. She had to admit it was far faster than she expected, and certainly quicker than any camp fire she ever started. Completed with his task, Tulsan sat down to comfort Astrile and watched Bali-la for whatever else she might have him do.

Except she did not issue commands as he expected. Rather, Bali engaged in a strange whirling dance around the campfire and her companions. In doing so, she began to sing in a strange language. Or was it simply raw sounds and noises? Because for whatever reason, the shadow law that allowed all speakers to understand each other did not translate this. Perhaps it was a spell? He had once been told that magical phrases and power words did not manifest as anything coherent for anyone, but the speaker. Puzzled, he dared not speak, lest it distract her from whatever exactly she was doing. Still, a part of him was naturally wary of her. All Xibalbans were something to keep an eye on. Well, maybe not Astrile; she was amazingly harmless. But a Death Clan Xibalban? The spider people were not necessarily known for helping others. But they were recognized for their cunning and just as often, malicious trickery.

As Bali danced, her legs and arms kissing the upper edges of the flame, Tulsan noticed the flames seemed strengthened by a convex of air growing around them from her consistent and articulated dance-like movements. That made sense, but that the fire began to turn an icy blue...? Well, he had no explanation for that.

Soon, Bali's dance incorporated the black bead necklace she wore as one of her few accessories. Flitting the black beads between her fingers as part of some trick-like motion, she would continue to dance, sing, but also dip the necklace into the kiss of the blue flames. Tulsan could only watch, knowing little of the ways of what seemed to be magick.

Finally, after several minutes of chanting and droning, Bali's dance stopped and she held aloft her necklace. With a swinging motion akin to hurling a sling stone, she threw the necklace into the air, where it suddenly burst with a bright bull's eye of bright colors and aesthetic crooked line patterns. Bright light shone from the necklace, growing brighter still as if made of ethereal gold. Tulsan felt woozy as he watched it with an amazed gasp.

Bali spoke, but he heard no voice. He only seemed to know that she did.

-Time to dream- she seemed to say, her voice becoming distorted before all went black.