105. Visit to the Dreamtime 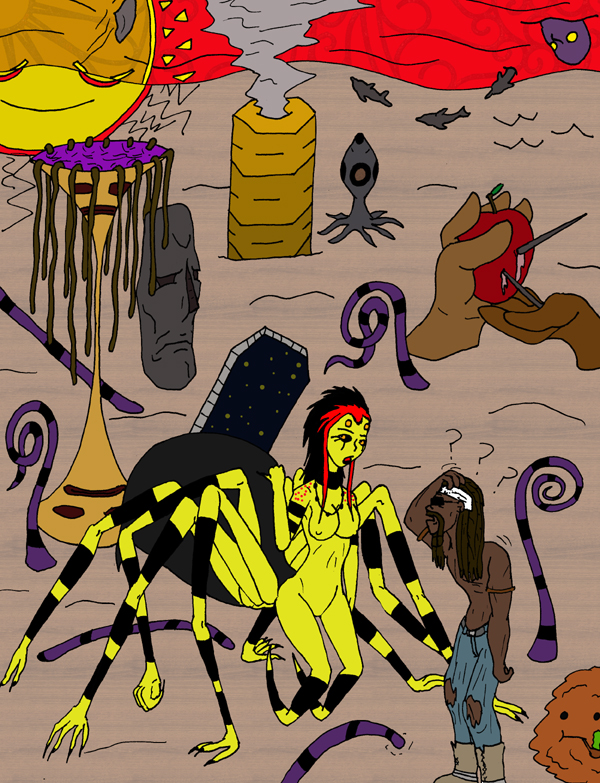 (Sorry this one is late from last week. There will be another update this week too. -Chernobog)

He had felt as though he dozed off or had been day dreaming on his feet. Tulsan Mune startled with a cough, feeling a warm ambience touch his well tanned skin. Confused, he recognized nothing when he opened his eyes. Wasn't he just cradling Astrile as Bali had been... oh. Right.

Still, seeing was not quite believing in his situation. The landscape was, for lack of a better term, seemingly bat-shit in layout. The sky was a red ocean from which dolphins leapt, faces stared, and the sun seemed to be both above and below water, somehow gracing the land like a stencil. Weird beings, plants, or structures, none of which he felt confident enough to discern as whatever they truly were, dotted the landscape, composed of a modestly toned antediluvian clay. There was even an aperture in the ground that just seemed to drop off into the void of space itself. And all before, standing as if nothing were awry, was Bali. Except even she was different. He knew nothing of it, having walked in late to overhear that of the story that Bali-la told Karolina, but it was Bali's native 'arachne' body. Taurian, it was similar except for her skin was curiously more vivid in tone now, closer to a goldenrod or lemon yellow, than a faded summer squash. She stood upon legs ending in clawed hands, trying to get his attention. "Tulsan? Are you well?" she asked.

"Well, we can take in the sights later, perhaps. Do you remember why we're here?"

"Oh. Oh! Yeah, uh... where's Astrile? I thought she was right here." He felt very off balance. Everything was so familiar and different all at once.

"She's around the bend. But we need to get on this now. Tulsan, she's very late stage. This is going to be a lot harder than I expected."

He started to come around, recognizing the sound of danger. "Right. Right! What do we need to do now?"

Bali took in a deep breath. "I can't promise with certainty that we can save her anymore, but... the only way to save Astrile... is to kill her."

"What." He took a step back, caught off guard. "What are you talking about?"

Bali frowned uneasily. "You heard me speak of the Song, yes? There was a time I could cleanse Astrile almost effortlessly. But I don't have the ability to do that anymore. The corruption in her is very pronounced. I've manifested it here in the Dreamtime, where it can't spread, due to the nature of this place. But as an entity, it's taken form and I believe it's quite dangerous. It has a piece of her, but we have it isolated as long as I have it here. You and I need to kill that part of Astrile if we're going to save whatever is left of her."

"Alright, I think I've got it," he nodded. "You made it sound like we'd be fighting her and-"

"We are, Tulsan. We are. This is late stage shadow infection. There's a chance she doesn't come back from this, even if we're victorious. And we can very much die doing this ourselves if we're not careful."

He quieted down, feeling uneasy, although still willing to go through with this.

She watched him for a moment and then nodded to him. "It may be her and I know she's your friend, but... give this your all, Tulsan. I'll do the same. We get just one chance at this. Okay?"

He nodded grimly, now without words. Bali looked baleful for some reason and took a deep breath. "Good. It's time to begin..." she said with a beckoning motion of her hand.

This is going to sound strange, but your artwork sometimes reminds me of the Beatles if they had gone mad.

Heh. That's definitely one of the more unique comments I've seen in all the time I've made this franchise.