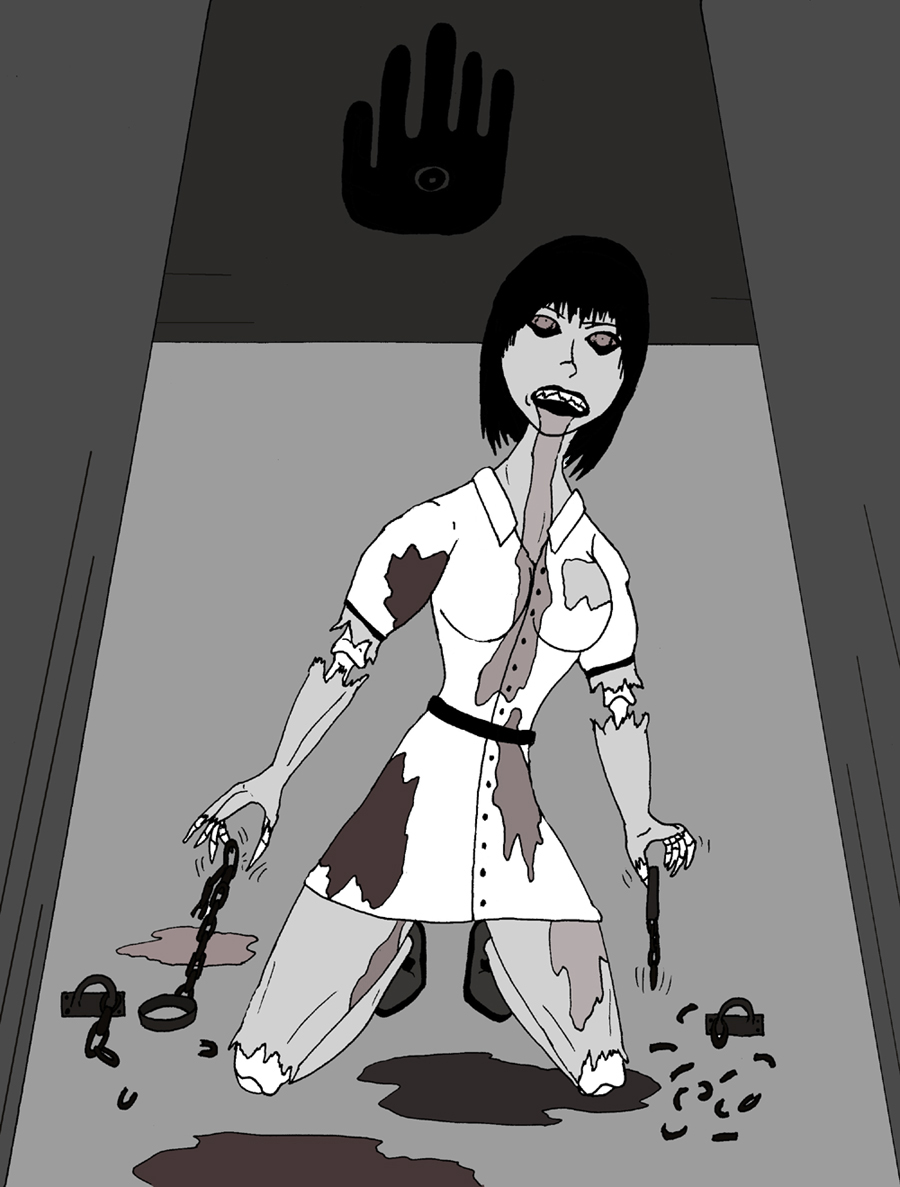 As their eyes adjusted to the thing staring back at them, Bali shuddered and took a half step backwards. The crimson eye glow of the tomb's inhabitant was a clear sign that all Xibalbans understood, for they too suffered from it if they could not meet their unique dietary requirements. "Feral..." Bali spoke in a hushed voice of concern.

Inside the crypt, a discolored dead woman sat kneeling, glaring at them with a psychotic expression. She was shabbily dressed in an ichor and mildew stained dress with puffy shoulder sleeves and a sash. Her hair was dark, short, and filled out, almost groomed. This only belayed the otherwise grotesque look of her bone exposed knees, elbows, and fingers. Her teeth were an inexplicable mess of dentistry- they more resembled a jagged bony plate rather than demonstrate individual molars or cuspids. Her lips were foul and black, far thicker than Bali's.

In the back of the otherwise featureless tomb, a black palm had been painted. And in the center of that hand, there was what appeared to be an eerie simple round eye. Bali did not recognize the marking, but more important matters caught her attention in the meantime.

In the moments they took to observe the living corpse, the zombie raised her sickly arms and revealed unbound cuffs and broken chain links. She played with each in her hands, making a series of audible metal clinks; the very same Bali heard.

"Oh no! How did she get those off?!" Karolina exclaimed, as the shock of what she beheld reached her.

Bali shivered, meeting the resurrected woman's misaligned stare, her growing snarls filling the Xibalban's ears. "It was bait. It was all bait! The noise... she wanted us to open the crypt!"

"Help me close it before she gets out!" Karolina shouted, "I don't know what's happening here."

Bali looked at her with alarm, momentarily wondering what that meant in an already tense situation. But she more than understood the potential danger. Dealing with anything that was 'feral' was asking for trouble. The two backed further out quickly, and began to push against the stone doors so the latch could be re-engaged.

However, the stony slabs which barred the mausoleum were far more stubborn to close again now that they had been breached. The two grunted, but the crude portal barely budged. "Nnngh! Damn thing... won't move!" Karolina grunted, putting her back into it.

"My side is jammed too," Bali said, straining. "Must be all the rain. Do what you can!"

The two continued, giving the doors their best, as the sound of shuffling loafer shoes against the crypt's floor dragged. The sole resident slowly rose from her exposed kneecaps and groaned out some terrible corpse cry. "Naaaahhhgggguhhuhhh..."

"Who is she?" Bali asked, trying to make sense of the situation.

"I never knew her personally," Karolina grunted. "It was an experiment. I was... trying out magick; a specific spell... and I guess I didn't understand it very well. I just wanted to bring everyone in Adelaide back to life... so, I found an intact skeleton and figured I'd see what I could. Yes, I know it sounds incredibly stupid in hindsight."

"At first, it seemed like it worked well. Her skeleton was reforming flesh and I figured it was a matter of time. But I didn't expect this. I just wanted to save everyone... not make a living corpse! Obviously, I soon found I screwed up badly."

"No, I don't know how. But not for lack of trying either. I just... I'm just not that good at it. I overstepped the bounds of what I knew how to do and now..."

"That said... her name is apparently Siouxsie Q. I found a name tag on her dress when I found her remains... no idea on what the last name is. I'm not sure she's even from my time... maybe someone from before or around the Herald event? Anyway, all I could do was keep her in here until I found a way to undo the zombification and return her to rest. She was a lot more calm in the beginning, but she started getting aggressive in a short period of time. Now, we have this. Egh, I'm such a screw up..."

"Karolina! She's feral!" Bali shouted. "When was the last time you fed her anything?"

"By the Herald..." Bali uttered, swallowing hard. Geists and shadow people were one thing. But Bali was not familiar with walking dead things quite like Siouxsie, let alone necromancy from a witch who didn't know what she was doing. But she knew when a situation did not promise good tidings.

Just then, the zombie crept out of the tomb and looked at the two women, snarling and studying them. They ceased futilely pushing the door and backed up together, with Bali raising her guard and Karolina aiming her spade between the undead thing and herself.

"I'm so sorry about this..." Karolina blubbered, her tears of shame blending in with the rain. "I'm terrible at everything I do!"

"I'll forgive you if we get through this. I'm no less to blame right now, especially for falling for that bait. If I left the matter alone, well... As for self loathing, it's not the time," Bali-la said with concern towards the witch and the predicament.

"Ngraahhah..." groaned the zombie, locking on and approaching them. The corpse, pin point eyes emblazoned with madness and marked deterioration of the iris, suddenly lunged at Bali, tackling the Xibalban with blinding aggression. Bali caught the wiry wrists of the unfortunate, but was surprised at the crazed strength behind the skinny corpse. In moments, the two toppled in a struggle, crashing to the muddy ground of the cemetery.

Holy crap!!! My back feels exposed! Like I have a million maggots crawling up it. This is so disturbing. Masterful writing!