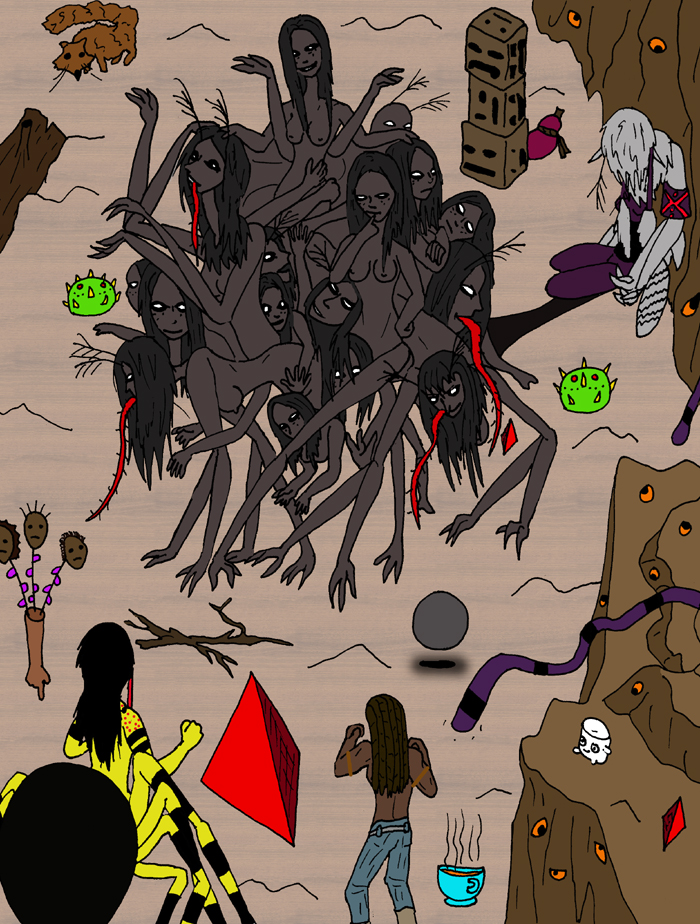 Together, Bali-la and Tulsan Mune rounded a rocky corner in the outlandish grounds of the Dreamtime, which were bedecked in all manner of nonsensical features, including alien plants, a giant tea cup, and brown blocks with faces. Much of the scenery itself seemed to watch them, in truth. Orange eyes gazed with bodies from the rocky hill and there was the presence of geometric shapes dotting the landscape without rhyme or reason. Tulsan could hardly put himself past the idea that he wasn't dreaming, as far as he understood it. Or maybe he was?

True to her word, Astrile was slumped against that rocky bend as Bali said. Her skin was grey and ghostly, neither moving nor showing signs of life at all. However, trailing a line of darkness from her body, 'stood' an abomination if they ever saw one. Even Bali flinched, although she had previously some idea it was there.

For lack of a better term, it was a dark sooty grey mass of flesh. Half formed bodies, heads draped in even gloomier hair, white vacant heroin eyes, and antennae. Multiple nude duplications of both Astrile and Karolina emerged from an ambiguous central point, whispering incoherently with the voices of both. It was the corruption of Astrile with Karolina's clear influence upon it.

"By the gods... what... what is THAT thing?" Tulsan muttered with a disgusted shiver.

Bali tried to remain impassive, but she felt a growing hostility she rarely demonstrated, building within her. It was the same she felt, but more pronounced, when she faced the geists in the sand cave.

"The culmination of our friends as a living shadow, if what you two told me is right."

"What? Why does it also look like that girl you were speaking to earlier?"

"In another life, she was the source of these things. That face you're seeing is who she was. The entire infection bears the residue of her interaction with the corruption that was known as Outer Hell. Astrile became the host when she was infected... by what I presume was a more advanced geist." She remember how even when fighting the old Karolina, the geists seemed to evolve into more effective forms as time went on. This was no doubt another step.

"Don't worry, Tulsan," the thing spoke with a vile otherworldly chorus. "There is no death here, just a new beginning. Leave her, and join us in the shadow."

"Don't listen to it, Tulsan," warned Bali. "It'll say anything. Astrile is there against the hill, not there. This thing is the same as spiritual cancer! It has part of her identity, but it's not her!"

They charged towards it, shouting a battle cry, each of their own inner make.

"Fools," the creature whispered cheerfully, dubbing itself as Astrilina after the Bloodflower and the Shovel Witch. "We will break you!"

Yikes, if three is a crowd, what does that many make?!?