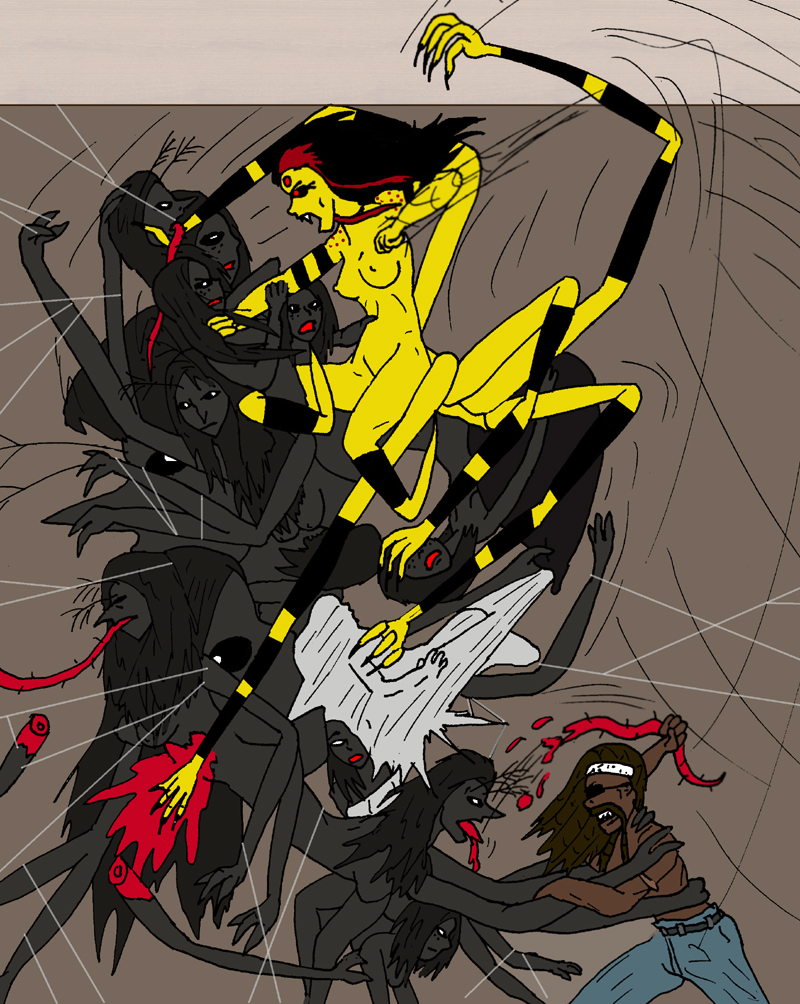 On this strange plane of matter, memories, and meaning, the fight that broke out between Astrilina and Bali with Tulsan was utter chaos. Astrilina was an ever flesh warped monstrosity, where new heads and limbs grew like a hydra, seemingly without rhyme or reason. On the other side stood Bali in her arachne form, her native body form she could not 'dance fight' with, but she did not lack ages of experience. And of course, there was Tulsan, whom Bali knew little of except that he was a hunter, and perhaps a very good one, albeit without any weapons on his person at the time.

The three employed little upfront tactics, save for Bali who cautiously flanked about between the nearby stone wall and Astrilina. Tulsan charged, aiming low for a corrupt tumor of Astrile on the abomination. He was quick compared to the copy of Astrile, which allowed him to breach past her long arms and seize her mosquito tongue, something he knew a Bloodflower could attack with. Astrilina grabbed onto him, but found the hunter savagely wrestling back against the awkward gangly limbs and keeping a section of her under control with his grip on that vile bristled tongue.

Bali was not hesitant for long, as Astrilina mainly focused on her, effectively rolling close with a myriad of limbs working together. Bali timed her movement and launched herself at Astrilina, only aiming for the higher sections where Karolina copies seemed abundant, such as the one that spoke earlier. And thus, there was a chaos of flesh, as fists, claws, and a spinneret worked against each other's opponent in what seemed to be frantic savagery, amidst the cacophony of their collective howls and hisses.

And although Astrilina was bigger than they, Bali was vastly more versed in warfare than the timid Bloodflower or the inexperienced Karolina that composed the monster. Noting that the copied Karolina's did not seem to employ any magic meant Bali faced what was effectively a series of human opponents compiled together. The Astrile copies could attack from a greater distance in safety, but they were not considered strong or fearsome Xibalbans. This one lacked strong claws and wings. It seemed the corruption adopted a simple overwhelming approach with her limbs.

Unfortunately for Astrilina, Bali's personal body fitness, allowed her to claw and strangle with her long legs that ended in nailed hands, countering much of what the Astrile copy could do. Harassing the Karolina copies, she began smashing them violently, still knowing how to throw a vicious punch even in this form. Further, Bali used her height advantage from leaping upon Astrilina to keep the monster off balance, tilting, and rolling where she wanted, as they fought. Little did any of them know, but Bali had begun trailing silken lines from the stone wall to Astrilina and anywhere else. If one was to fight chaos, one could either match it, or reduce it. As a spider, she excelled at both. So with the battle raging, Astrilina could focus little on the slowly growing amount of loose strands beginning to cling to her in a hindering fashion, as the spider lured her into more during the scuffle. And when the opportunity allowed, Bali even sprayed her silk on portions of her enemy.

Tulsan, meanwhile, tore off the Astrile copy's tongue, after planting his foot on her face. Blood began to spill and the creature moaned, but there was more maiming to inflict. Tulsan, for what little had been stated about him, was not shy about fighting a monster bigger than himself, armed or not. Much of his entire life involved such challenges, never settling on any one creature or enemy. He adapted rapidly to the nature of chaos around him, even able to swing out of way of Bali's errant web strands as needed. Without saying a word, he immediately understood his partner's strategy and worked around it. Bali couldn't help but notice that for a human, he was very fierce and knew how to fight aggressively as barbarians like herself could. It was respect worthy.

After binge reading both AG and AG2 I can honestly say your writing has improved immensely over the years.