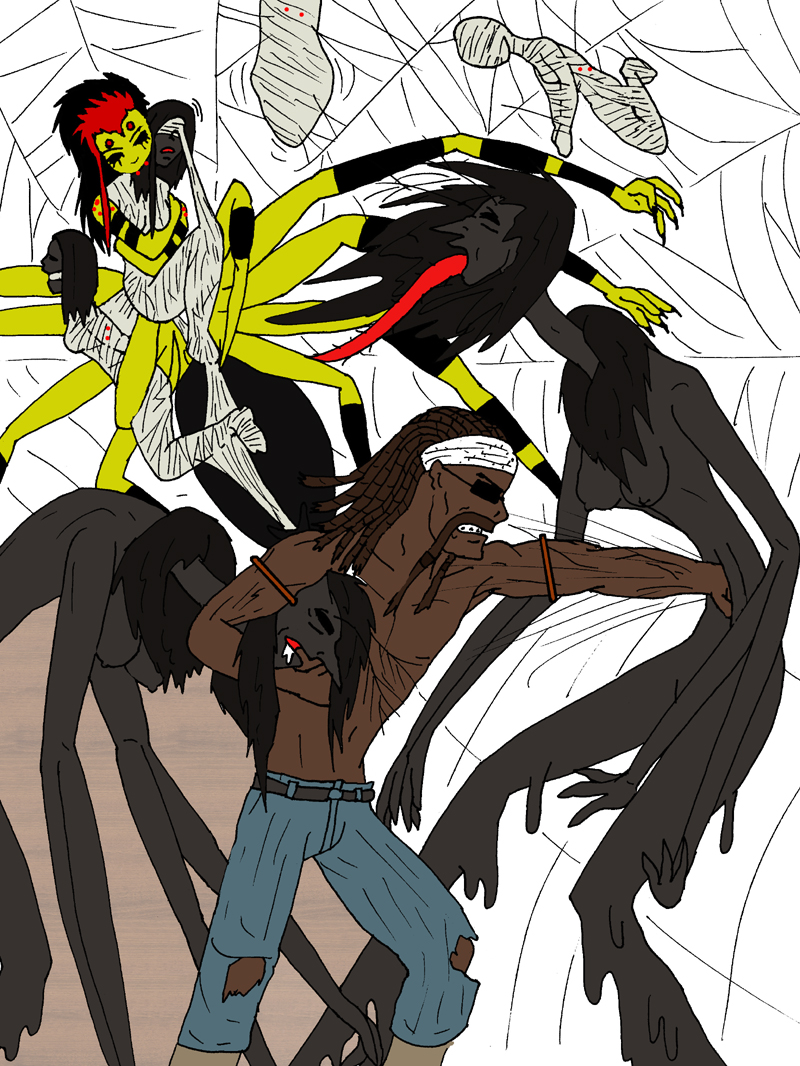 For as grotesque and threatening as she first appeared, Astrilina fared surprisingly poor against the two. Lacking effective natural weapons or spells to employ from its hosts, Bali and Tulsan beat and tore the beast apart. However, it soon became clear enough that for as much as they kept it off balance, she would keep regenerating new forms. But that was okay. Bali could see Astrilina was slowing down, running out of energy to do it rapidly. Still...

"Now, let's seperate her from herself. Take the Astrile copies and drag them away from the center mass. I'll do the same with Karolina's copies. She's wearing out, but we have to break her up. When you get to the last functioning Astrile, force it back onto Astrile herself. That should help restore her."

"Not a problem," he said, pummeling and ripping the false Astrile to pieces when he saw it.

The two worked well together and true to Bali's instructions, Astrilina began to break down, as Tulsan hammered his friend's shadow copies to decomposing ooze, while Bali, unable to use dance fighting in her arachne form, had little trouble trapping the Karolinas in an increasingly confusing web upon which they would blunder into while fighting or scrambling, only to become helplessly trapped. And like her spidery identity, Bali would quickly weave them, kicking and howling, into cocoons, silencing them with a bite. It was something most any Death Clan could do in such a form, but all that mattered was that she could here and now.

With this, the monster known as Astrilina quickly broke apart into individual components, with the copies rotting apart immediately or dying from seperation, which it couldn't handle as Bali surmised.

Suddenly, Tulsan tilted his head as he dragged away the last of the Astriles towards the real one. "Bali! One of the... well, the copy of your friend is getting away! She's making a break for it."

Bali glanced up from the Karolina filled web, paralyzing another copy, when she saw a lone Karolina running from the battle in desperation. However, the spideress seemed unconcerned and continued finishing off her grasped clone.

For the runner was entirely expected and precautions had been taken. And Bali had not let on how much she was actually familiar with fighting this sort of enemy, despite all her nervous posturing earlier. It was an act to lure Astrilina into a false state of confidence and to ensure Tulsan, who was an unknown factor, would do his best. True, it would have been difficult for Bali to handle Astrilina on her own without the Song, but with competent help, it proved somewhat easy.

As for the runner? There was no element of chaos in this fight that Bali had not predicted well. There was an ocean of experience between her and a shadowy corruption entity with Karolina's face, after all.