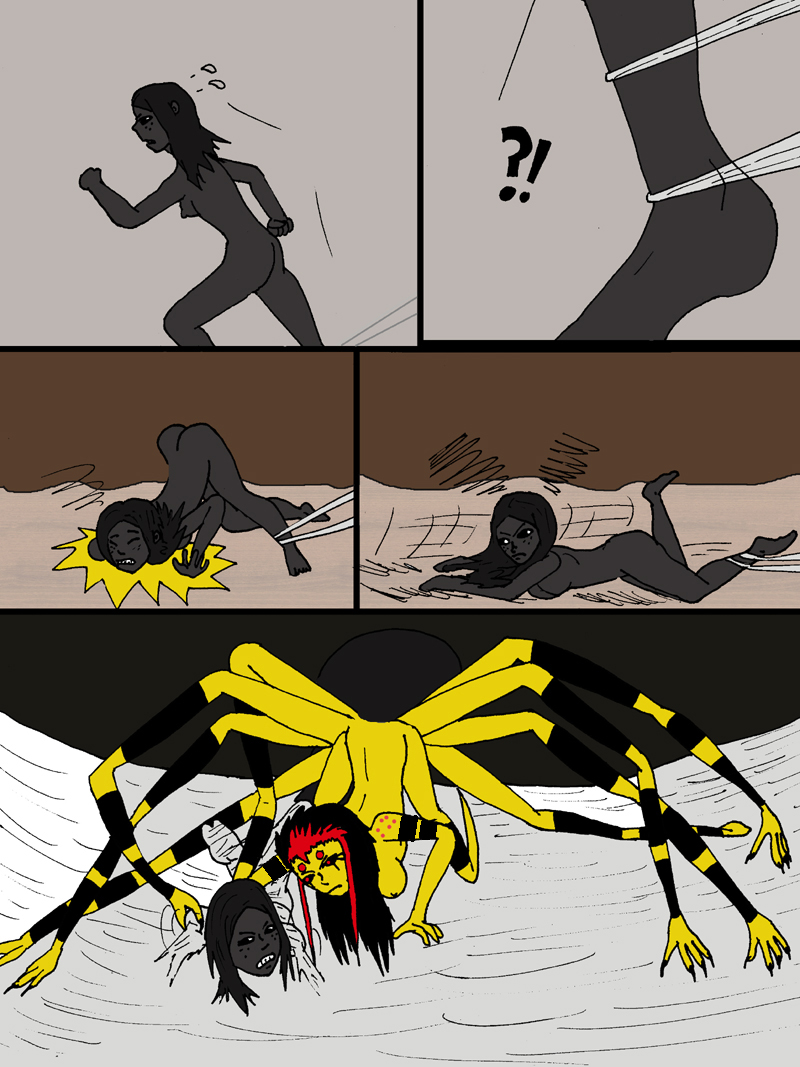 The lone fleeing Karolina clone ran. She had no idea where to flee, really. Just, away from Bali-la. She wasn't half as effective as she expected with all those limbs in that giant body ball. Both Bali and Tulsan ripped her apart like she was nothing. And in truth, she mainly was. She had none of the magic of the original Karolina and Astrile was a rather feeble excuse for a Xibalban. A passive and avoidant Bloodflower? This duplicate of Karolina knew her luck had been poor from the start.

Unfortunately, Bali wasn't lying when she effectively stated she had the entire matter under control. During the fight, she had been laying random strands and swaths of silk to complicate fighting against her. It was not something Astrilina was prepared for. Even holding onto memories shared from Kara and Outer Hell's original fights with Bali, she acted more the part of a martial artist than a spidery threat. So all of this was new as well.

Astrilina tripped on several wayward web strands before long, tumbling awkwardly to the ground. Before she could realize what in the world had happened, Bali casually began to reel her back to a web she had loosely made in process of trapping the others. Astrilina kicked and tried to stand, but she couldn't shake the sticky strand loose and being nude, she had no way to break it.

Bali dragged her enemy beneath her larger arachne form and effortlessly rolled Astrilina around and around in spooling circles with her many legs ending in hands. Struggling but quite defenseless as the others had been, the final Astrilina was cocooned in under a minute's time, squirming in a tight silken body bag, revealing only her head. It was futile to resist now, but that didn't stop her from trying.

Bali leaned in, looking disappointed with the corruption. Behind her, Tulsan brought the last Astrile clone to the real thing and watched the two seep into one another. While that would help the Bloodflower, this lone Karolina was of no particular use in the scheme of things. Simply, Karolina's image represented the base form of the corruption before it spread to others in the form of shadow poisoning. In the end, she was just a fancier form of the shadow infection that made geists. Always trying to advance and problematic, but seemingly always outpaced. At least, thus far.

Grimacing, Astrilina, or at the very least, the last one of them, grimaced back at Bali-la. She knew she lost completely. And she was not likely to be spared.

"Any last word or obscenity you want to get off?" asked the spideress. "Or can we just put this to rest?"