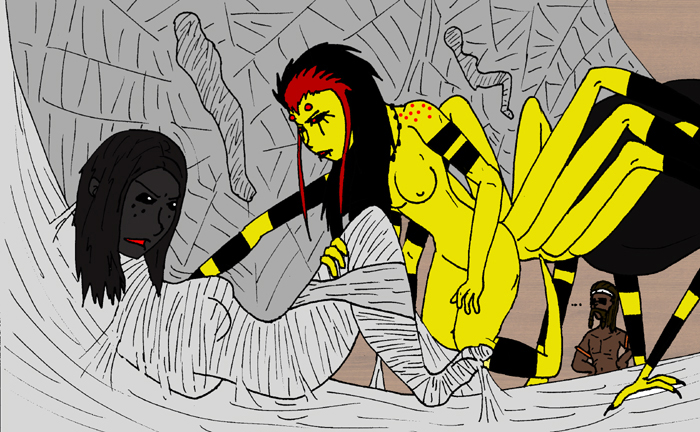 "Tch... what's to say?" Astrilina sulked with boredom and disappointment, more than fear. "I only exist because I got stuck with a powerful freckled loser and a chump for a Bloodflower. You're going to kill me and we both know I'm not relevant to anything, so... it is what it is. You think death has any meaning for me? I've barely done anything. Returning to nothingness will probably the closest thing I'll ever know to sleep. I don't want or expect your pity. I see those red eyes... I doubt you have any to begin with. I'll admit I'm curious how you seemed to know how to take me apart like that, but... eh."

It wasn't common to hear the occasionally corruption she met talk, particularly beyond threats or something similar. They usually seemed without much personality, inner drive, or a sense of anything beyond the present-to-near-future of things. So, Bali indulged, if but for a moment. She wasn't sure what she was expecting to hear. It's not like Outer Hell or Geists really spoke to any degree.

"Experience. You're hardly the first corruption I've encountered. Or killed."

Astrilina raised an appraising brow. "Odd... you know, now that I really think on it, I sort of remember you now. Yes, you were the one with Karolina before. I have a distant recollection of you, albeit in a different body. It was back during the witch's 'Kara' phase. Ugh. You were such a pain in the ass. Why did you even get involved?"

It was about now that Tulsan came onto the scene, but he observed the two talking and chose to remain quiet. It was easier to learn without speaking on his own part, usually.

Bali shrugged dully. "Like I said, I've been at this for a while. Bits and pieces of things like yourself have shown up over time. Maybe entities like Outer Hell are related... but you all tend to act similarly."

"I have no idea what your talking about. I exist here and now. Until I don't. We have no name for ourselves beyond the title of our hosts. We are a strain. We exist en masse. Until we don't. Whatever legends you have assigned to something like us, we do not care."

"Well then... I suppose that's that," Bali-la said, growing tired of the conversation. It was a slight insight into the mentality of the corruptions, but it didn't matter much now for several reasons.

"Wait..." Astrilina said, fidgeting, suddenly growing curious. "Why are YOU fighting us?"

"What? Why would I not? You assimilate everything around you. You would ruin everything worthwhile about Xibalba and those who live within it. Do you even have a reason?" Bali spoke, sounding a bit affronted to even be questioned by a corruption. Wasn't it obvious?

"We have but a purpose to take over others. Nothing more, nothing less. Hosts are needed to lead. They are subsumed. That is the way of things," Astrilina said plainly, as if that was just as apparent as Bali's thinking. "Only that girl was strong enough to keep us in line so well- ours is a rambling horde. But that is not what I ask of you, spider fairy."

Astrilina repeated herself. "Why are YOU in particular fighting us? Your eyes... they're red. That's unnatural for a fairy. But I recall you with orange eyes before with Kara. That surely means-"

"I know what it means," Bali interrupted with darkness in her throat. For a moment, Astrilina went silent. "I couldn't tell the real version of you, Karolina. She has enough on her shoulders to manage. This... this was all planned. One last positive deed. Bringing you here. Doing what I could for Astrile. Wiping out that smug expression of Kara on your face. This is a good way to stop."

The corruption looked at her, seemingly rather impressed. "I don't know how you've held this off, fae. But it's more than I would have assumed you could. I hear your kind are resistant as feeders of shadow essence. But perhaps... that you had that Song ability... ah! I get it now! It stopped this from progressing, didn't it? And it's gone. It's been gone since your encounter with Kara, hasn't it? It seems you never got it back. So... what was this? The candle burning at both e-"

Wordlessly, Bali gripped the corruption's head and snapped her neck. Astrilina's eyes stared and her words ended in a meaningless noise. And almost immediately, the corruption's form would start to break down into inert ooze.

Bali stared at the growing black puddle seeping from the cocoon. She then looked at her fingers and touched them gracefully, as if experiencing their presence for the first time. And she knew who's eyes were on her back.

"Tulsan. How much did you hear?"

Taciturn, he stared quietly at the spideress, arms on his side. "About as much as you intended for me to hear. Am I right?" he said stated with rhetoric gruffness.

Bali raised her head slowly and nodded, still not facing him. "And Astrile? Did we make it in time?"

"I've done what you asked me to do. And I believe so. She's unconscious, but her skin tone is slowly returning to normal."

"Then it wasn't all a waste. Forgive me, Tulsan. I wanted to save one more person," she said, looking at him behind tired black and red eyes. "After the whole Kara event, at least."

He sniffed, arms at his side. "Don't need to apologize to me. You did what you said you would do. From what I gathered from all of this...? You might be a manipulator, but it seems like you tried to do everything for the right reasons. Astrile aside, I don't trust Xibalbans much, let alone Death Clan types..."

"And?" she asked, after he paused to let that settle.

Tilting his head, he responded, "But I think you're all right. So... now what?"

Bali smiled, clearly looking worn out. She settled down for a moment and resumed her more human-like body. "I'll tell you. But only if you explain why you adopted that funny accent when we first met? I haven't heard you use it since. It's been bugging me."

He sighed. And they both laughed. The world was absurd.