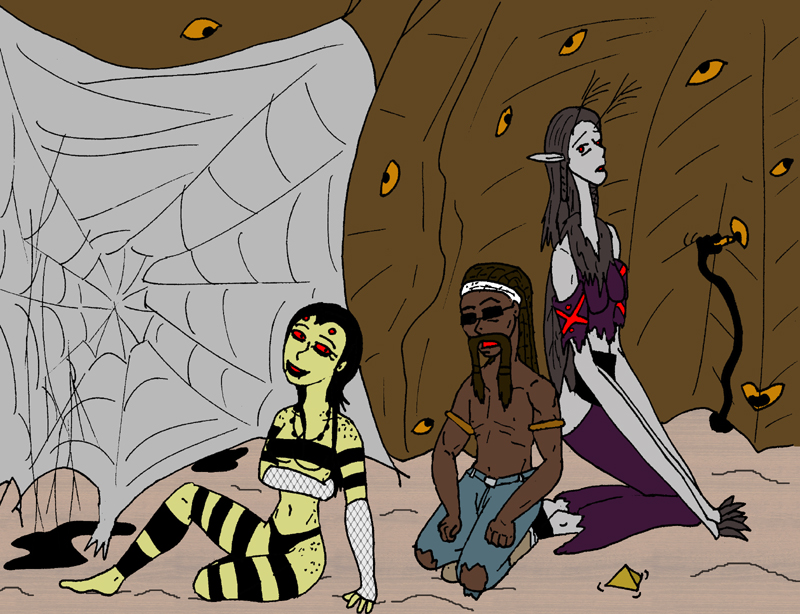 Gathering up Astrile, who was still mostly grey toned from her poisoning event, but muttering to herself in an unconscious state, they sat down between a wall of painted eyes and one of Bali's webs. Her silks were now devoid of cocoons, as the trapped and slain Astrilina clones were dissolving and dripping down into puddles of useless ebony ichor. It seemed like a good enough place as any.

"So, the accent, eh?" Tulsan began, as they sat down. "Alright, I'll cop to that. That was just an attempt on my part."

"Attempt at what?" asked Bali-la, looking oddly relaxed although her eyes beamed with a feral red.

"Trying to act more human, I suppose," Tulsan said with an embarrassed sigh.

She shot him a strange look as the statement filtered in. "Huh? You're not?" There was no indication to her senses that he was or had been anything but human. Even Xibalbans in their humanoid disguises tended to look imperfectly human or gave off a certain scent others easily recognized.

He shrugged, seemingly less than proud. "Well, not as much as I used to be. Had an incident a good while ago."

"Hmm. Did you apothesize into one of the tribes? I must admit, I didn't sense anything about you like that."

He shook his head. "No. Nothing like that. There's stuff out there that has nothing to do with Xibalban clans. The world's full of magic. Might as well be the same in the long run, though. Eh... if it's all the same with you, I'd prefer not to talk about it right now."

"So anyway, getting back to the question earlier, I tried using a heavy exaggerated Australian accent, the kind people might have had before everyone spoke the same tongue. But it's all forced, which I guess came off as obvious enough. Just wanted there to be something more centric to what my heritage was, as opposed to, well, your team, I guess. But I could never remember to maintain doing it, so I half assed the accent. It was all based on things I've been told before I was grown up."

"Can I ask you something? You really seem to have something against Xibalbans as a rule, if don't mind me saying. But you've been protective of Astrile. And I think we have an understanding now. What is it based on?"

He stared at her, seeming to decide whether to respond grumpily, with bitterness, or resignation. Given her deeds, he chose the latter. "You were never human, were you?"

"No... I was born fae. Was drawn into the Death Clan after that," she said briefly. "What about it?"

Tulsan sat on his haunches, watching Astrile begin to stir. He nodded to his friend before turning back to Bali. "Your friend, Karolina... human, right?"

"All of this... ALL OF IT. This used to be our land. Australia. Louisiana. Whatever. I know the general story of the true Xibalbans like Astrile here. Earth was really their world... heck, what am I saying? You joined a clan. It was your world. Anyhow, the Herald Event happens, wipes out about ninety five percent or more of all human kind. The rest are either enslaved, eaten alive, or join the clans to survive. Those ones that joined, they usually apothesize and become bug people or whatever. We were once the ruling kind of this world. Now, we're the tinder and the tribes are the all consuming flame. Assimilate or die. And we get told by the tribes how much humankind was a long running failure, weak, dependent on technology, divisive to the point of self destruction."

"Now, Bali... how do you think that makes us feel? Heck woman, we almost got wiped out entirely back in the day after the Herald Event. I know about that incident with the Death Clan Tyrant bitch tried siccing everyone on us. Only the scorpion people, what's their faces... the Sun Clan, and what became the Marcus Army managed to stave that off. So we earned some respect, I guess, but the problem is still the same. Humans can't survive out here. I'm sure Karolina knows it. And I've felt it."

"But I wanted to be the exception. I learned to fight in the Marcus Army, but I saw a lot of them simply apothesize into the scorpion people. Marcus sure didn't seem to care, he frickin' married into them and became their high chieftain last I saw. So, I went on my own. And alone, I fought. Everything. I wanted to show all of Xibalba that humans weren't just an afterthought or living on someone else's mercy. I became good at hunting solo. I didn't need anyone. Or so I thought."

"My father's still around. He doesn't care. He just whiles his days away playing checkers and othello with all manner of Xibalbans and other types. My cousin? Apothesized. Joined wasps or some crap. But not me. I felt as long as my heart stood alone, it wouldn't happen to me. And it didn't. Until the incident, anyway. Now, I just stand alone, but I know I'm compromised. Humans... we can't win out here, no matter what."

Bali said nothing, merely listening. She didn't agree fully with his assessment, but she understood it. And the man made more sense. She glanced to Astrile, who was listening idly as well. The Bloodflower had an expression that said she knew this story all too well. Bali also understood how Tulsan would want to protect and root for an underdog like her, now. They were people who felt powerless in the face of Xibalba itself. That he disliked Xibalbans was true, but in a way, it was because they were the banner for this uncaring great land.

"Do you... really still dislike all of us?" said Astrile, weakly interjecting, wobbling slightly as she sat. "You speak of an old purging. Of apotheosis into another form you weren't born with. Have... have Bali or I done anything anything to draw your ire?"

Tulsan sighed and cast his head down. "I don't honestly know what it is I believe anymore. Maybe it just seems that nothing is my own. But I have nothing against either of you, in truth."

Bali smiled a bit, looking up at Astrile. "Are you feeling better? You're still recovering. But don't worry, you will be safe here. This is the DreamTime and it harbors no tolerance for the corruption. You can return home when your vitality comes back to you."

"I'm sure I have you both to thank," said Astrile. "My head is foggy... it feels like I was someone else. But, you both have my appreciation. I would not have gotten this far without you, Tulsan and Bali. Thank you for saving me."

They exchanged appreciative glances, as they sat on the grainy earth of the DreamTime.

"Well, I think it's your turn, Bali," said Tulsan. "Where do things go from here?" He wanted to know what she meant earlier.

She adopted that serene smile again, which didn't match her feral toned eyes. "Where you go, is up to you. You're welcome to stay here for a bit, but it will prove disorienting the longer you're around. Such is a dream and you are uninitiated to this place. Maybe I would ask something of you, however. As for me... well..."

She sighed wistfully. "I'm afraid this is the end of the line for me. For now, at least. I couldn't tell Karolina... she... she has enough to deal with, without me."

Tulsan and Astrile gazed at her, feeling a bit caught off guard, although more her than him.

"I can't go back, Tulsan. Fairies cannot become feral, it's a form of corruption for us. But you see these eyes and so I am. I've been sick for a long time. One of my greatest feats was simply hiding the fact from Karolina. As a Courtesan, one gets rather good at putting one's best foot forward, you know? But I can feel it inside. Like an old niggling disease. And there's no one left to help."

She took her black bead necklace off and played with the beads in her fingers, as if remembering something fondly. "It's been a long life. I don't have regrets," she said with a soft chuckle. "Well, not too many."