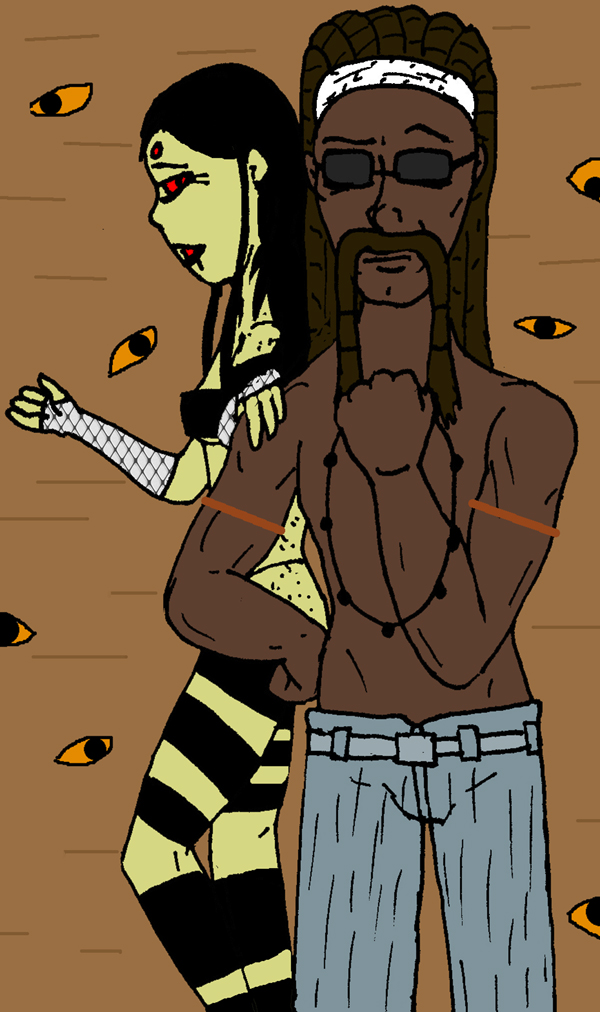 "So... what would you have me do?" Tulsan asked, after a moment of letting Bali reflect. "You wanted to ask me something? I assume its some kind of task that involves being done outside this place."

She looked up. "You'd be willing?"

He folded his arms, feeling too soft when she put it like that. "Well, let me hear what you want and we'll take it from there. I'm not against it, all considering. It's not like I had any ability to save Astrile on my own. I can probably go a little further with the generosity, I guess." He sneered at his own statement almost immediately. He didn't imagine himself as a kind do-gooder person and everything was making him feel that way. Bah!

Bali smiled, picking up on some of his discomfort with bemusement. She carefully placed a hand on his shoulder to reassure him he wasn't weak for helping others, if that was the case. He bristled slightly, side glancing at her. It was also possible he didn't like being touched.

"This necklace, Tulsan- you've seen what it can do under the right circumstances. It's made from ancient silk and volcanic rock. It's a gateway to the DreamTime, but I have no use for it now that I'm here."

He took the necklace and looked it over. It was well made, but rather crude. Each bead consisted of obsidian, long since faded from it's normal luster. "I guess you want me to take this to that Karolina girl, right?"

Unexpectedly, Bali was silent. Tulsan looked at her puzzled, thinking his answer had been obvious, given what he had seen and heard of the two. Who else was supposed to have it?

"I thought of it for a time," she said. "As much as I like Karolina, the DreamTime is not her heritage by any way that I know of it. But you, Tulsan... this is."

"Wait, what?" he seemed caught off guard. Him? They barely knew each other. "Er, with all due respect, we're acquaintances at best. I feel like this has a sentimental importance to you that I couldn't share-"

She looked at him with all seriousness. "Tulsan, your collective people and mine have ties that go back before men built houses of stone. Sentimentality aside, the DreamTime is part of your culture, is it not?"

He looked at the beads quizzically. "It is. But... I don't know much about this place."

"You told me you connect more with your past as a human than whatever happened to you that made you not, Tulsan. Your people and mine existed peacefully in the oldest days of Australia. Not as rivals, but actual allies. You don't like us now, that's fine. But this... this was given to me by the indigenous people of this land thousands of years ago when we worked together. Before your tribe became tribes. It was a token of appreciation. I'm returning it to where it belongs. I am home in the DreamTime now, Tulsan. I cannot afford to leave this place without the Song in my throat, and it's forever gone. There is no reason you shouldn't have it, even if it is yours to give to your father or another member of your family."

Tulsan, at first, didn't know what to say. Astrile was similarly quiet. The implications of what Bali-la said were heavy. Inconceivable for ageless beings, really.

"I... I don't believe that," he ultimately said sternly. "You've been dishonest with Karolina. You could do the same with me if it suited you for whatever reason. Despite all the good you've done in helping me with Astrile, I'm not here to be manipulated." He held the necklace back to her forcefully. "You make an implied claim of being ancient, of knowing my distant ancestors... where is your proof?"

Even Astrile skeptically chimed in. "If you're as old as you claim to be, how do you still remain here? No Xibalban, however long lived, stays forever. Eventually, we feel the call to leave. They say we disappear into legend, even."

Bali frowned, looking increasingly disappointed. "My name is Bali-la. It means Bell Flower. Do you know why I have to explain that?"

Her guests looked at one another, unsure of Bali's meaning.

"Because I received my name before the time when the Law of Shadows came into effect. There was a time that not even Xibalbans shared one tongue. As such, my name was grandfathered into existence from the old tongue of the Fairy folk. It can't be translated automatically as a result."

She continued. "As for why I'm here... it's complicated. But to put it simpler, I was frozen in a stasis within rock itself. When the Herald Event occurred, the earth was torn asunder, and I was released from that petrified prison, where I came to be in modern Xibalba. Perhaps due to that, I never felt the call to 'walk into the sunset', as you know it, Astrile."

"I don't know how long I've technically existed. But I suspect many thousands of years have passed. Everyone I knew and loved is gone. And yet, I can't hear the call to leave this world either. So, I wandered, alone. Until I met Karolina, or Kara, as I first knew her. I guess I should have retired to the DreamTime earlier than that, eh?"

They just stared agap at her, not certain what to think. A living Xibalban from before the Law of Shadows were instituted? It was an impossibly distant age to consider. Nothing about her seemed that obviously out of place. Was she being deceitful again? If so, to what point?

Tulsan ran the beads across his fingers carefully, as Bali had done before. Was this truly an artifact from the oldest times? Of a friendship bond between his people and hers? Why had she given it to him specifically-

He paused as it finally dawned on him. He heard with his ears, but he hadn't listened with his heart. This was the tie to the unfamiliar world around him. His heritage. Not from the time of houses of stone and cell phones, but an old link before any of that was even a spark in someone's muse. His bond to her. To Astrile. To this world. He had been here the entire time, but only now did it click in his head, as if given a key to his own reality. He had been running from nothing.

He held the necklace to his chest and wiped his eyes under his sunglasses. Suddenly, his futile battle with everything around him was gone. It didn't matter if this trinket was magic or not. It was of him. Of all of them. Astrile watched, feeling out the situation as best she could. She tended to trust his judgement and so, she smiled warmly.

"Carry the joy it brings with you at all times, Tulsan. The knowledge of it sustained me for this long. Think what it might do for you," the spider woman said.

Now feeling indebted, his attitude changed, and he looked upon her. "This is a gift like no other. I'm sorry I doubted you so thoroughly. Bali-la, tell me, is there nothing I can do for you?"

The spider woman seemed serene. She had gotten through to him. She had helped save Astrile from corruption. It was a good day to retire after all. And then...

She heard the sound. Distant, like the rumble of old thunder mixed with wind chimes. Somewhere, far away. Somewhere bright. Away from here. Her heart finally felt light.

"Bali?" Tulsan asked, noticing she was suddenly distracted by... nothing? Astrile glanced about, oblivious as well.

"Bali? Are you okay?" the Bloodflower asked, after the spider woman seemed mentally elsewhere.

The spiderwoman gazed at the two of them, her eyes dilated and dreamy for seemingly no reason. She studied them for a moment, as if trying to remember their faces. She winced.

Turning partially back to a sunset in the distance of the DreamTime, she looked down, still focusing, only this time on the gritty sand of this place. "In the time of my imprisonment within mud and stone... there was another. Yes... I remember now. A spirit made flesh. Not a fae. No, she was unique amongst all Xibalbans, amongst all the tribes."

Bali strained, starting to lose focus for some reason as she turned southward to the sun. "Give her a chance in this world, she has earned that much. She's not like the rest... the rest... of us. She brought us all together... mankind and Xibalban, back then. Seek her at the 'navel of the world'... Karolina can help you."

Without a further word, Bali-la began to walk in a trance to the sunset.

"Navel of the world...?" Tulsan muttered to himself. Seeing Bali leave, he reached out, but it was Astrile's hand that held his now. She realized what was going on. Tulsan looked at the Bloodflower, confused. Astrile shook her head.

"Tulsan, remember what she said before? It's her time, Tulsan. Let her go."

They watched as the spider woman steadily walked south, becoming smaller and smaller on the horizon until only a blip of darkness remained in her wake as the sun's light consumed her from view.

They watched, unflinching, until the figure of the Death Clan woman could be seen no more. Tulsan gripped the necklace given to him before easing his hold upon it.

Astrile looked at him and took the necklace, placing it around his neck.

"I don't understand..." he finally said, stifling a sound of being choked up over a relative stranger. "I'm not Karolina. She barely knew me."

"Because Tulsan. This was your time too." Astrile replied.