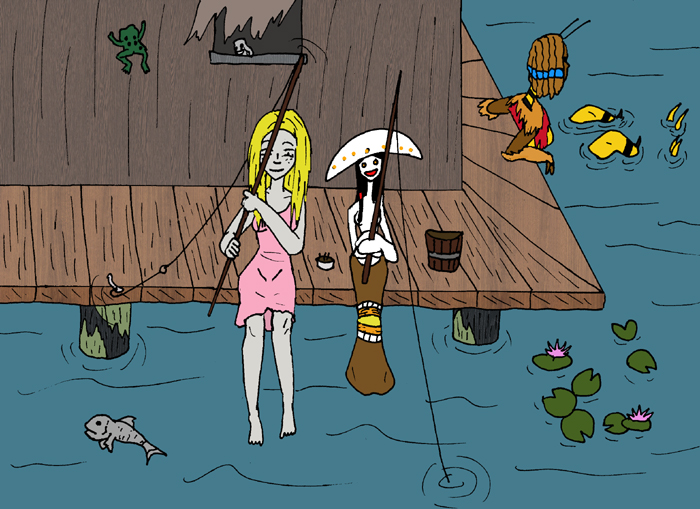 "It's been several days since the whole incident with the Longtooths. Looking back, especially since the time I left Adelaide, it hasn't really been that long in the scheme of things, but I've seen and learned of so many new things out here, away from that place... it feels like a second life. Sometimes, I suspect that's what Bali was trying to give me all this time and I just couldn't realize it. I'm genuinely trying to turn over to that new leaf, you know? I feel like my voice is my own now, too. Before... I don't know, it felt like I was living in someone else's story or I was only a shadow of being a person."

"Beltresz was true to her word and took us to that fishing cabin she mentioned. It's honestly not that bad. There's was still a bit of old gear and clothing inside. Oh, and the building is settled on a short pier on a slow flowing creek. I've been able to dip my toes in the water, fish, and go to sleep at night listening to the water moving. I could do with less tree frogs... they're incredibly noisy at night. Take the good with the bad, right?"

"Rottkap and I have been hanging out for most of my free time. I wondered if I liked her if just because she's a kind of fairy too (orange eyes and all that, right?), like how Bali was. But that's kind of shallow, and I don't think it's true. Rottkap is just easy to get along with. Unlike everyone else I've met out here, she's not all powerful or all knowing. She seems kind of lost and discovering herself. Like I am. I feel like I can relate a bit to her, even if she is a walking talking mushroom."

"Beltresz is a different story. She might've been human once, but she's not exactly friendly. We don't seem to have much common ground. I don't mean to say she's been mean to me or anything, but she's not big on chit chat with any of us. I think it's less that she's antisocial and more that she doesn't really know what to say. That said, she's kind of defensive, always watching either me or our surroundings. I can't say I feel insecure- she's like a body guard in many ways, but she doesn't seem to want to get close to anyone. Either she doesn't particularly care for us or she considers us kind of weak. All of that might be true. I do feel like she sizes us up, particularly me, from time to time. Still, she hangs around us, if just out of sight, fairly often. So, she's not avoiding anyone."

"And then there's Tom. Half the time I forget he's even there. The little guy is kind of weird looking... I mean, he is just a walking hand, but then again I'm becoming friends with a fungus girl, so it seems like anything goes out here."

"Tom is a pro at eaves dropping and making himself scarce when he wants to be. He has, however, been willing to give me some tips about magick here and there, however. He also encourages me to study daily, so I can't say he's a bad influence."

"One particularly useful trick he explained to me concerned how long it takes to cast a spell. He explained the rituals and chants I do are good for memorization, but they'd probably be too slow to use in a pinch. Looking back to the fight with the Longtooths, I couldn't disagree. He mentioned carrying the spell book around all the time is also going to be a drag and that I should learn to cast without it. But how? I need to have Chernobog's symbol nearby to make the spells work, I told him."

"Tom indicated I should get a tattoo of the black symbol that Chernobog uses. I could use the symbol off of that to cast on the go. All I would have to do is 'welcome the tattoo' when it gets made, otherwise the healing in Xibalba would just remove it. Apparently, any wound you willingly inflict on yourself or allow in clear conscience bypasses that Law of Shadow. I never knew this stuff! Now, just to find a tattoo artist at the end of the world, eh?"

"Oh... one other thing. I don't know who or why, but I keep feeling eyes on me from somewhere. I let Beltresz know, so she's keeping an eye out, but she hasn't picked up on anything. Am I being paranoid?"

"I'm wondering if it's guilt, to be frank. Beltresz insisted I bury Siouxsie's head, that the smell would otherwise attract scavengers and monsters. I still feel bad about Siouxsie... I've had thoughts about what to do. I've been wondering what happens when you try to re-animate something that was already undead. Yeah... been thinking about THAT ritual I tried in the past, the one I apparently flubbed when I made Siouxsie into a zombie. Maybe I'd understand it now? Or do it better? I don't know... I just can't seem to leave the matter alone for some reason. And I feel like she got brought back before only to die again so quickly. She called us friend, for god's sake. What am I doing? Truth be told, I haven't mentioned this to Tom. And yet, I'm afraid to actually look at the spell that did it."

"Changing topics, today, I confirmed that Brand and Tom are directly linked. Makes sense, Tom Thumb's a familiar, so Brand must know actual spells then. Anyway, Brand wanted Tom to tell me that someone was looking for me. Someone went to Brand's camp and since he just so happened to know me, asked if I wanted to be found. It's some guy named Tulsan Mune? Should I know that name? Anyway, we had to keep the message short so we explained where he might find us."

"I might've said no, but Beltresz reacted strongly to that name. She told us it was okay, but she's been particularly stand offish since then. All I got out of her was that he's someone she knew before she became a Harrier."

"Seems like everyone has a past. Hrm... I wonder what Bali's been up to lately?"

I'm very glad Karolina's story is continuing, even if, sadly, Bali is no longer part of it!

I'm happy to hear you're enjoying it. Have no worries, we've a long way to go before I ever need to consider ending this.

Ah, good to see another page. I was wondering if you were ending this webcomic from the content of the last page.

Ahh, I didn't think people would consider the comic approaching an end. My bad. It most certainly isn't. We're still just getting underway on the second arc of the story here. AG2 should be around for some time to come.