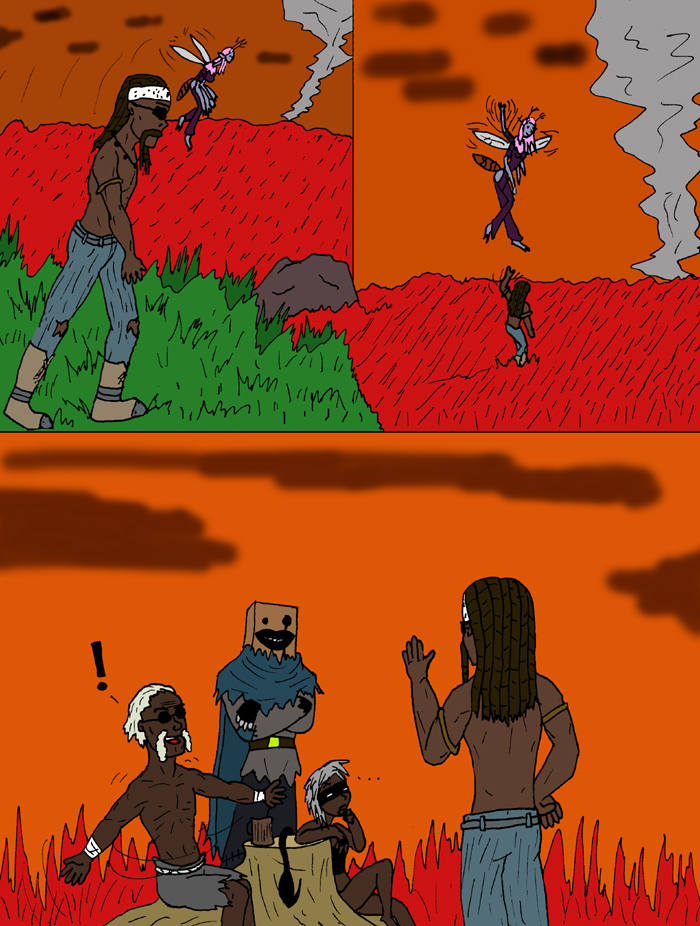 Unsure of how to return to the normal world from the DreamTime, Tulsan and Astrile passed the time waiting, allowing the Bloodflower a chance at recovery without much obvious danger. Although the DreamTime's appearance was peculiar, it seemed removed from the threat of outright violence, at least when compared to Xibalba.

Eventually, they slept and awoke back in their home. Whether the DreamTime was another dimension or a state of mind, they couldn't say. Bali would keep her secrets with her, it seemed. But at the very least, Astrile's natural colors had returned from her grey flesh. She would swear she never felt better.

Back in the wilderness, there was a matter of what to do next. Tulsan continued to look at the black beads Bali gave him, still feeling honored but unworthy, amidst feelings of confusion. He was not used to being unsure of himself, but the pendant seemed so unnatural to receive. And yet, it was more akin to him and his than he could easily acknowledge.

"Hm?" He shook his head, as if day dreaming. She had seen the look many times now.

"I think it's time I got a move on, no? But, I wanted to say thank you again for everything. I don't fully know why you decided to watch over me in my worst hour but... I appreciate it. Especially considering, you know... how you don't like Xibalbans."

He seemed less grumpy, but no less calm. "It wasn't anything, Astrile. What can I say... I like an underdog. Besides, I didn't get an air of danger from you. And maybe I need to rethink this whole position I have on Xibalbans. It ain't right."

She smiled a bit and nodded. "Well, no one will call us saints, that's for sure. There's good and bad ones. Just like humans."

He could admit that much. "You've got that right, I suppose. Where will you go now?"

She looked to an oncoming orange sunrise. Seeing an almost regular sunlight in the DreamTime had been a rare treat. Maybe the shadows of the land didn't reach that far. "I'll head back to my home territory, I think. This has been a learning experience in some ways. I can't keep avoiding everyone and everything. Flying high in the air has worked for a while, but all it took was for me to land once to get infected before. I need to learn to fight better. Maybe adapt a better form. I feel too gangly like this."

"Some of my people can fight- maybe I should learn to be one of them," she continued. "It doesn't flow in us as naturally as some of the other tribes, but that's no excuse." She bowed her head slightly. "I see that now. I've been on a coward's path. Well anyway, I should get going. Thanks for giving me a second chance."

She blushed and waved her hand anxiously. "Oh! Sorry, I figured you wanted to be alone. I notice you've been acting differently since we met Bali."

"Just got things on my mind, is all. Nothing bad. Hrm. Well, I was thinking of what Bali was talking about. You know, the Navel of the World? I think I might know a few people who may have an idea about that one. And... well, maybe I should tell that Karolina girl what happened. I don't understand their falling out, but since we're the last ones to see Bali go, maybe someone should tell her."

"Maybe. Maybe I'm just no good at sitting still. I feel like this is important on another level, too. Heritage wise, you know?"

For a short time, Astrile followed Tulsan, if just because their routes shared a same general path. But their individual Blood Sensing would take them in different directions ultimately. It was at the great field of red pepper grass that they parted ways, and Astrile flew in the direction of the Bloodflower's homeland. Maybe some day they would meet again? With a bittersweet wave between the two, remembering the platonic time they shared together, they went their own way.

In time, Tulsan had made his way to Brand's camp in the red pepper grass field. Most people in the area knew of the camp. Brand hosted a relatively safe neutral location where one could trade both goods and information. If anything, he was well connected across the region, while taking no real sides with anyone. Such a service was invaluable to many, but people also knew not to rely on him too much. It was said he was one of the infamous Sin Eaters, a strange organization that preyed on the fault lines of men and women alike. It was important to remember that Brand rarely did anything for free. Either he expected something, or he gained something elsewhere. Still, it was hard to deny he had his uses, even if it was just to get a drink cheaply in an otherwise dry area.

In particular, Tulsan had not necessarily come for Brand for everything on his mind, although dealing with Brand was definitely a fall back plan for at least part of it.

Arriving at the open air camp, it was still littered with kegs, random pieces of equipment for trade, and various wanderers from all over who either sought Brand's advice, a safe place to rest amidst a journey, or to wet their whistles. Tulsan, however, bee lined for a regular of this camp. They had not talked in a while, mostly because of different ideologies, but Tulsan's father was practically a landmark here.

A much more laid back man who directly survived the Herald Event, unlike Tulsan's mother, Jarrah Mune was a permanent fixture here. He worked for Brand as a consultant in some ways, in exchange for whatever drink he desired from Brand's kegs. Jarrah considered himself retired, for all pretensive purposes. He was already in his sixties when the world end. With the Law of Shadows taking hold of him and all other survivors (in most cases), his aging froze at that point, leaving him some two hundred sixty eight years old. If the temptation to wander into the sunset like Bali did ever struck him, he never let on about it. Rather, he was often seen chatting with other visitors of the camp or just playing them in checkers. The man acted seemingly unaffected by everything related to Xibalba. He simply enjoyed himself.

"Oh... look there! Do my eyes deceive me? Lysis, that's the one I was telling you about!" Tulsan's father could be heard from a mile away, although Tulsan himself stood only some twenty feet. Next to Jarrah was some female member of the Sun Clan, the scorpion people most aligned with humanity after the fall of the world.

Tulsan sighed and waved to his father, who met him with wide open arms. "Boyo! Give your pa a hug! I haven't seen you in almost a year now. This is a great surprise!" The old man, wearing his usual ratty shorts and sandals, stood and embraced his son.

"Hello father, it's good to see you," Tulsan said a bit dryly. He didn't have a bad relationship with his father, it's just that they had different levels of energy and excitement. For an old man who usually just sat around on a tree stump playing checkers, Jarrah was rather energetic. Today was no different.

"So formal still!" his father exclaimed, hugging his son back. Meanwhile, the one called Lysis seemed to be eyeing Tulsan with interest like he was candy. Even Brand walked by to observe the excitement.

"Welcome back, Tulsan," said the bag headed proprietor. The Sin Eater was often more reserved than his father.

"I make things happen." It was Brand's way of saying yes and 'Don't forget I can do a favor for a favor'. He already concluded Tulsan had a reason to be here, since the boy and his father were night and day in personality.

"What's bring you here?" Jarrah exclaimed, patting Tulsan on the shoulders. "Come to spend time with your pa?"

"As nice as that would be," Tulsan muttered. "I have some business here. Pa, do you know of a place called the Navel of the World? Or at least, where I could find it?"

"Navel of the World...? Well, there's an old name... give me a minute to think on it," Jarrah mumbled, recollecting what he knew.

"And Brand?" Tulsan raised a pointed finger. "Have you heard about the location of someone named Karolina? I figure you're well connected."