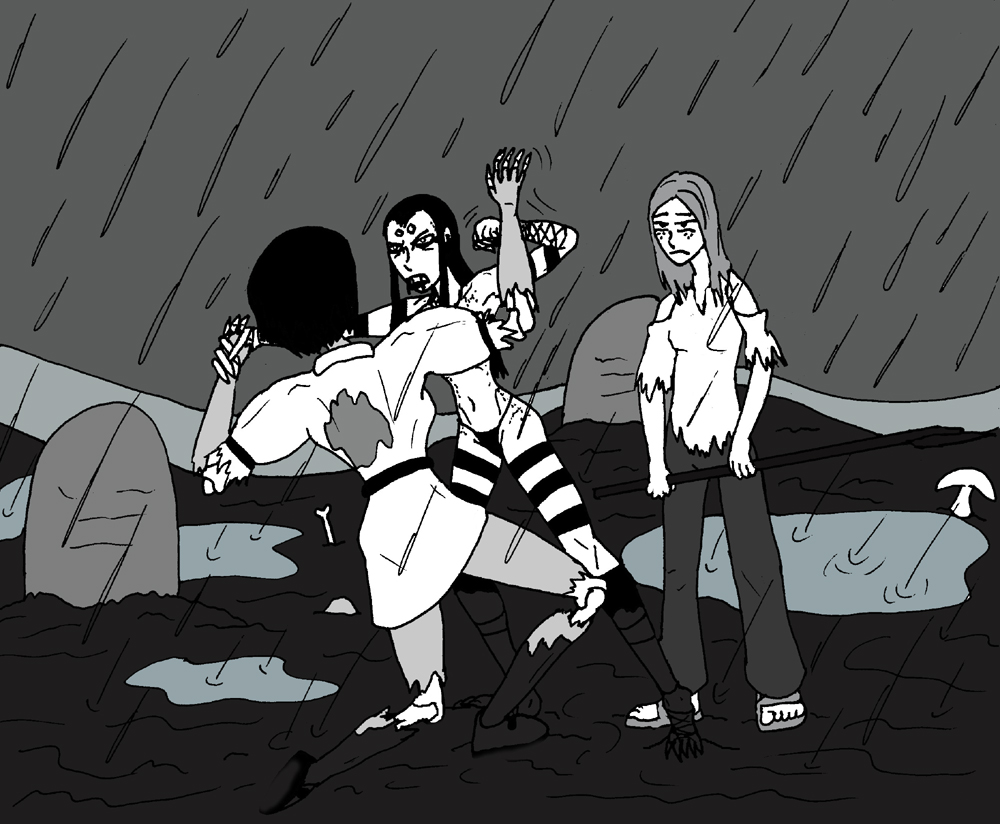 They wrestled back and forth, the two of them partially catching themselves from a complete fall on the mud strewn earth. Rising, Bali quickly rallied, fighting a defensive struggle with her undead opponent. Karolina watched, as if lost in a fever dream with occasional bouts of lucidity. She held tightly upon her shovel's haft, mumbling to herself. "I did this." But the words were easily lost in the falling rain and splashes of mud between the two others.

Bali, for her part, did not accuse Karolina or ask for help, as the human stood ready nearby, simply staring into the zombie's decomposing eyes. Bali kept a solid grip on the zombie's wrist with one hand, while deflecting and swatting the other bony hand. She did not seem to be a stranger to hand to hand combat, despite having given no indication of any prowess earlier. But who knew what she was capable of?

As for the zombie, she was strong and her hard bony wrists were painful to deflect, but Bali handled it without complaint. Bali also noticed the zombie seemed only capable of short bursts of frantic energy before seeming to run of gas for a bit. The Xibalban knew this was typical of one in a starved feral state. Perhaps if she was able to offer the zombie meat, she might calm down as Karolina asserted of her at an earlier time. But Bali was not looking to offer herself or the human to the ghoul's hunger. For now, Bali waited and worked only to hold her own. The zombie occasionally leaned in to bite amidst trying to claw the Xibalban's skin off, but she telegraphed it each time. The feral state of being did not always allow for much subtlety in any capacity. That the zombie woman had even managed to bait them was actually rather impressive, given the circumstances.

Karolina, meanwhile, was in her own world, seeing the battle take place in a perspective of slow motion. She noted several things, as her mind flowed in a stream of consciousness without organization. The zombie did not look quite like she did before, when Karolina first raised her. The hair was shorter, the flesh around the joints was more ragged... and the fact she had any pupils at all was different as well. Did being 'feral' change a creature?

Looking at Bali-la, why was this stranger getting involved? Certainly, the living corpse chose her for a target, but why was Bali bothering? She could have run, couldn't she? The shovel witch waited mutely, expecting some call for help, some demand for an explanation as to why her guilty hands did not move to assist the Xibalban... why was Bali not truly condemning her like she expected?

And then, she looked at her own hands upon her namesake focus; the spade. 'A gravedigger first, and a witch second...' she thought to herself. 'That is what these hands do, don't they?'

Stoically, Karolina stepped in closer. It was time for work.