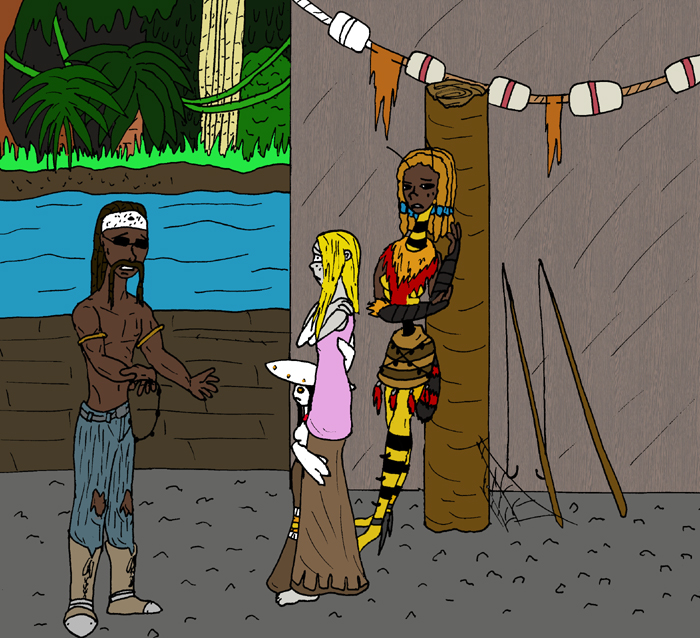 I recognized Tulsan offhandedly when he first arrived. I remember seeing him, albeit in passing, when Bali and I were having our, ah, tiff on the hill after the Longtooths. Except this time, he was alone. No idea what happened to the larger winged woman he was with.

He approached with more caution than I would have assumed was necessary for a tough looking guy like him. I didn't realize it at the time, but he was bearing news I wasn't expecting to hear.

I felt my throat tighten when he held out that tell tale necklace Bali always wore. His expression was sad. I soon learned of what happened with Bali, the Bloodflower known as Astrile, and the shadow poisoning incident that caused them to retreat to some place called the DreamTime. Now, I've heard of that, but it was nothing I knew in any detail. I thought it was a myth or legend, but Tulsan seemed quite adamant about his story.

I looked to Beltresz, who seemed to have some past with him. She had been leaning against a nearby pole, as Rottkap and I stood listening.

"He's who and what he says he is, more or less," she mumbled, her arms folded. She seemed a bit distracted, not coming off as gruff as she often was. "Tulsan is many things, but he's too straight forward to be a good liar."

She sniffed. "He's my cousin. If he says whatever happened, then it did. I'd put my blood on it." Somehow, she took no pride in his honesty from her tone. Some kind of family disagreement? That was my hunch, anyway.

It took me a moment to process it all. The shadow poisoning. A living geist had attacked Astrile, leading to an infection that arose in my image alongside hers which fought them. And... Bali leaving the world.

I admit, I don't know a lot of things about this world. Thanks to being sheltered and mind wiped, I'm learning new concepts constantly. It sounded like Bali retired, but that it was also a waking metaphor for death itself.

"She's gone...?" I choked out, feeling angry with myself for snapping at Bali yet again on the hill as I had. Tulsan nodded.

"To whatever afterlife or further state of being Xibalbans go to when they're, um... tired of the world. It happened suddenly. Like a weight was lifted from her. Honestly, none of us expected it. But from what I understand, yes. She's gone. I'm sorry. I, uh, I know you two had a thing..." he trailed off, not certain of the words.

I felt Rottkap hug me. I needed it. I felt emotions rising up within me, only to become bottle-necked and strained. I wrapped my arms around my neckline like a mantle.

Everyone looked about awkwardly for one reason or another. "Thank you, sir. D-did she say anything about me? Something she wanted to tell me? Maybe?" I felt like a greedy child for asking. Gods, why couldn't I have reacted better to her on the hill? Maybe she wouldn't have departed like she did.

"Not exactly... but, she did mention that she was interested if I could do her a favor before she went. And that's where she mentioned you. In that, you might help?"

At that moment, all I wanted was for Bali to come back. So I could apologize. I had every reason to believe she was angry with me. And yes, maybe she had more reason to be that way than I did. But she held her tongue then, where I didn't. And I know she wanted to help me. I just couldn't hear it then.

"Help?" I asked in a low voice, trying to focus. "Help in what? What could I possibly do?"

"I don't quite know exactly. In her words, there's someone at the 'Navel of the World'. My father tells me our people called it 'Uluru', while your ancestors probably knew it as 'Ayers Rock'. Lot of names, it seems. Anyway, it's a kind of sacred mountain. She said that there was a unifier of mankind and Xibalban, and that she was a unique kind spirit. She asked that this person be given a second chance."

I struggled to hold it together. I admit, I felt extremely bad about myself and how I acted. If Bali wanted a favor, I was more than willing to do it. I nodded sheepishly. "You know where it is?"

"Sort of. My father gave me an idea of what to look for, but with Xibalba changing landscape features all the time, we'd have to find it the hard way. But as long as we kept our goal in mind, we could eventually locate it. That's basically how the Law of Shadows works on it, you know?"

I didn't precisely, but I nodded. It sounded like how things worked. I was still getting used to the idea of Blood Sensing as it were.

"Tulsan? I'm willing to help, but... indulge me. What was the last thing Bali said? Final words?"

The aboriginal man rubbed the back of his neck, looking at the beads around his neck. The words seemed to come to him a bit painfully.

"Tell them I loved everyone. I did."

She loved everyone? Wait. Even... me?

"Thank you," I choked out to him. "Just give me a little time here..." I wiped my eyes and excused myself to the interior of the fishing cabin. I crawled under my blanket and cried as hard as the day I realized everyone in Adelaide was gone.