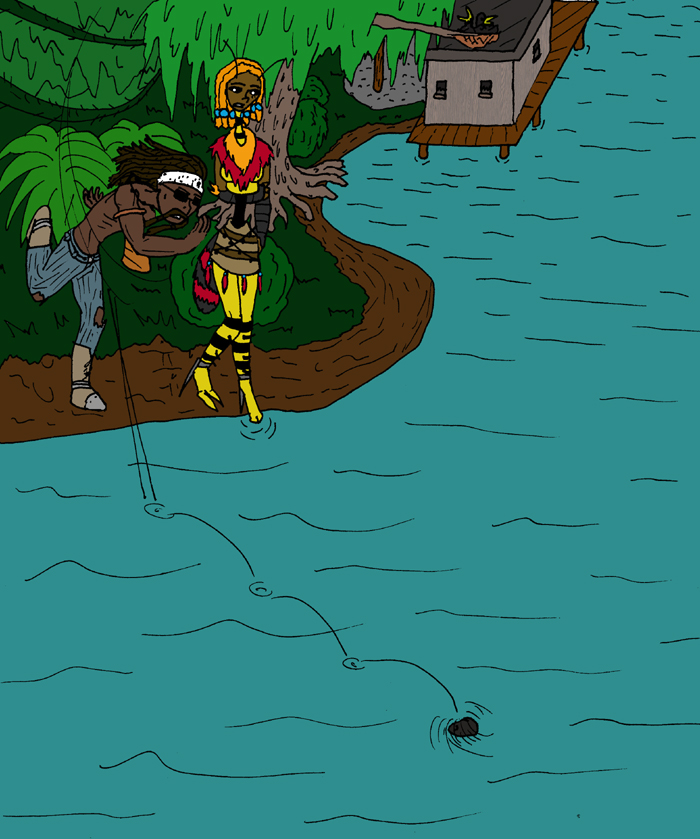 "I should probably go check on her," said Rottkap after a moment of letting the reaction sink. "Feel free to relax for a bit. Beltresz is very good at keeping us safe." The little mushroom girl hopped away to see how Karolina was doing in the cabin. Beltresz shared a brief smile at the compliment before turning back to Tulsan.

"Good job, you made the girl cry," she said boredly. "Sigh. Why don't we give them a little space?" She began to walk down the creek a short ways. Tulsan cleared his throat, a bit ashamed, and casually followed.

The two were cousins. Along with Tulsan's father, Jarrah, they were the only ones of the Mune family to escape the destruction that followed the appearance of the Herald. Tulsan and his cousin were scarcely more than children at the time (she, a little older than him), so Xibalba was the only world they would come to know as a whole.

They took position downstream, along the bank of the creek, and took turns skipping stones on the top of the water, as they had done many times before. Although they didn't hate or dislike one another, there was tension and disagreement between them, which accounted for their coolness with each other.

"I wasn't trying to make her cry. I'm not good at being less than blunt, I guess," he muttered.

"I know," consoled Beltresz. "I was just busting your chops. I've only been with her for several days and- I'm not gonna lie... I get the impression she's a bit whiny and weak."

"Bluntness runs in the family," groaned Tulsan to Beltresz's critique. "Then why are you here?"

She grunted irritably. "Harriers farmed me out to her in exchange for them taking over her old village. They think she nuked the place in the past. Honestly, she barely knows magic-"

"You know they're right?"

"She did. Long story short, I managed to overhear her and her Death Clan friend arguing before she split off a few days ago. The girl's some kind of magical time bomb. She probably would have eventually murdered everyone in the area if the Death Clan woman didn't mind wipe her. She was apparently a different person before- all kinds of out of control."

Beltresz stiffened. "Are you kidding? Her?"

"She's responsible for a lot of things, cuz. Those wannabe shadow creatures, the geists? That's her. I don't know her personally, but I fully believe the story I heard. It came from a good source."

The Velvet Ant woman twitched her antennae. She had vastly under estimated the shovel witch. Tulsan wasn't much of a liar. He was right. Bluntness ran in the family.

"Well then..." she said aloud, exasperated. "How are things with you?"

"Nothing much has changed. Short what's going on right now, that is. Dad tried to set me up with a Sun Clan woman at Brand's camp. He originally wasn't going to share what he knew until I agreed to get to know her. The man wants grand kids like no one's business."

Tulsan snorted. "I wasn't that interested. She got pissed and told us we were wasting her time. She was right, I suppose."

His cousin looked at him. "You really don't like Xibalbans, do you? Karolina aside, I don't really know too many human girls left out there."

He raised a hand. "Hang on, stop. It ain't like that. You can't just slap two people together and hope there's instant chemistry. Mrmph. But I'm thinking... maybe I'm not so sure on my thoughts about Xibalbans lately."

He shook his head. "Karolina's Death Clan friend. I don't know, maybe it was the necklace. Maybe it was the fact she was willing to help another unrelated shadow poisoned Xibalban I wound up harboring, but it kind of took the piss out me."

They stood silently for a moment.

"Thinking of joining a group and apothesizing-?"

"No," he said flatly. "I'm just not so against Xibalbans as I was before, is all."

"What about your curse?" she asked, aware of his shame over the matter. It was something he didn't like talking about much. Even his own family weren't completely certain what happened to him or when.

"Still there. Xibalba says you can recover from any injury, but magick will leave you maimed for life." He wiped his brow of sweat, taking a seat on the bankside. "What about you?"

"Egh. I'm no better," she commiserated, sitting down besides him. "I don't particularly care for having a friggin' stick for an abdomen. And no flight, of course. Honestly, a velvet ant... how did this even happen? I just wanted to fly and be stronger. And I wound up getting half that wish. But, I don't even fit in with the Harriers. I'm an Enforcer caste... in a tribe of people who don't break their own laws to begin with, let alone exercise much individual thought. I just don't fit in anywhere. Pretty sure they sent me with Karolina thinking I'd be more comfortable around another human. Or to get me out of their hair. They don't need me whatsoever."

"Does Karolina need you?" Tulsan asked.

She fumbled with her chitinous fingers. "I guess I'm trying to figure that out. Maybe. You say she's powerful, but I haven't seen it. Not sure I belong with them, though. We have nothing in common. I have a hard time accepting her as an Alpha, if I'm being honest. She's kind of timid and self doubting."

Tulsan spat. "Yeah? I knew another young woman like that once. She was called Bindi back then. I used to skip rocks with her"

Beltresz blinked and stared at him, frowning. "Shut up. Ass."

Watching the water, he felt his cousin's irritation. He smiled. "It's okay. I still like her, even if she took a Xibalban name and heart."

She slowly smiled and looked at the creek with him. "Thanks. You're still a complete ass, Tulsan. Just so you're aware."

Hey everyone, hope you're enjoying.

After some consideration, I've decided to take AG2 back to a black and white format. I know I've switched it from before, but the coloring process does eat up a lot of time and it isn't going to win me any awards. Because I'd like to free up some more time for other art and writing pursuits, I'm going to make Arachnid Goddess 2 black and white again.

I also intend to make an Arachnid Goddess compendium here, which will have some colored images of the characters to reference. This will function as an encyclopedia for the greater series as it unfolds itself, referencing characters from both Arachnid Goddess works. I'll announce when I'm ready to begin it.

Have a good one and hope ya'll stick around, the comic has a long way to go. -Penndreadful

Even though I, as I do for most comics, prefer the coloring, I totally understand when an author makes the choice to change to B&W. Any good comic can still thrive, as long as the writing stays strong. Which is VERY true in this case! I'm glad to see AG2 will be around for a long time to come!

Thanks for the considerate words and support!