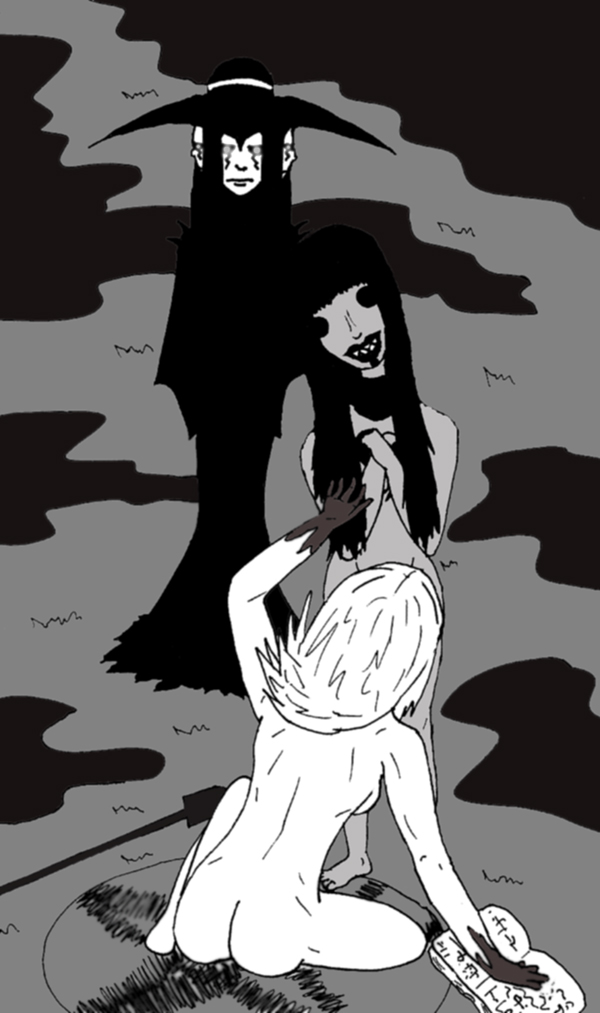 Following the familiar voice, I knew it to be that of Siouxsie, for all of the few times she ever spoke. I didn't know her to speak beyond a simple slurring of words, but when I looked up, expecting her, I only saw something that passably resembled some scant details of her. Black lips, crooked sharp teeth, and perhaps a vacant stare. And the nostalgia of an old friend ended there.

This being, who spoke with Siouxsie's tongue, did not look much like her at all. Her hair was a black long mane, maybe more like Bali's, but draping over her chest and folded arms, bearing clutched claws. The eyes were completely empty, just barren sockets, and were wider and spaced out further than I recalled of the zombie. A black collar marking wrapped around her neck and she possessed an off colored fleshy form instead of Siouxsie's rotten old body, which had exposed gaps of bone joints and fingers. Yet, looking at this creature, I could still somehow place the voice and slightly hunched posture as hers. She seemed morbidly happy to see me, staring into my soul with dead sockets and a fish-like toothy grin.

I didn't understand. I recoiled, holding my hand in front of me defensively, only vaguely noticing the black shadowy fire and discoloration was rapidly fading away. What I did become aware of, however, was the growing darker-than-before mist gathering around us. That and that everything else around us had grown quiet. No wind, crickets, or anything. I felt like I was suddenly in a private chamber.

Then emerged the ghostly silhouette of something that made even less sense to me, from just behind where the apparent new Siouxsie stood.

I couldn't fully make it out, as if trying to focus on a detail within a hazy dream, but it was like a specter dressed all in unyielding black dress and shawl, wearing a wide brimmed four point hat, and four masks, each of which was a white face with an imperious gaze fixated on me. Where did this thing even come from?? I wanted to scream, as I was quite freaked out, but I couldn't get the noise to come forth. I glanced about rapidly, looking for my friends, but I could neither see nor hear them. I was alone and naked, made to deal with this on my own.

"Where is... spider?" then spoke what seemed to be Siouxsie. Suddenly, I was much more content to focus on her dead gaze than the silent still phantom behind her, which merely remained in place.

Siouxsie tilted her head from side to side like a curious dog, her happy insane expression fixed. "Spider friend die?"

How could I even answer such a thing for her? The truth was a bit complicated. But, in a sense, wasn't 'death' sort of what occurred? She had left the world as far as I understood it, called to some great beyond in the DreamTime.

Thankfully, Siouxsie didn't wait for me to riddle out a way to simplify a response for her.
"Can bring... spider friend back? Like Siouxsie?"

I felt a cold chill run down my back suddenly. I wasn't sure why. "Oh. Um, no. I don't think I can." The thought was... uncomfortable.

"H-how are you?" I stammered out, trying to change gears and feel out the situation.

She looked at herself. "Siouxsie happy. See shovel friend again."

"Oh! That's good. I'm happy to see you too," I said shakily. For whatever happened, I was fairly certain this was actually Siouxsie, just in some new body. It must have been some quirk of the magic, since I only had her head to revive before. I don't know what I expected. But maybe this was a bit of a success. She seemed more physically put together, in all truth.

"Siouxsie happy too," she repeated. I remembered her mindset was extremely simple, so I had to keep things basic with her. Still, I was curious. Who or what was that thing behind her?

Siouxsie glanced over her shoulder, idling with a casual observation. She then turned to see me again and tilted her head.

"Friend from the darkness."