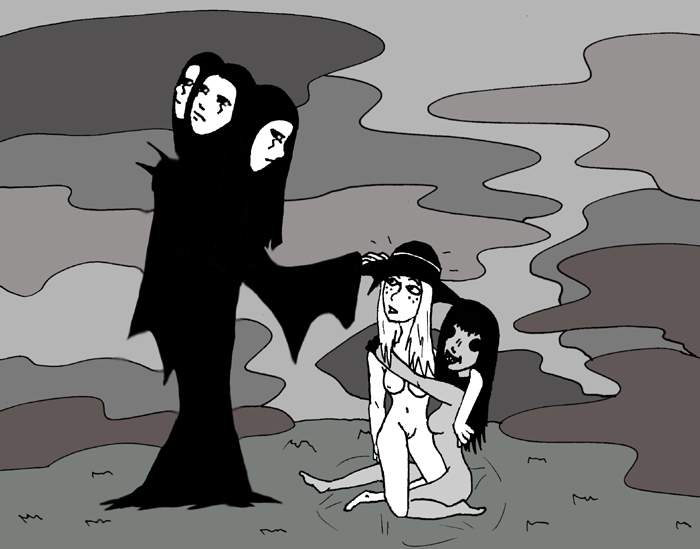 Happy to see me (and I was happy to see her too, although I was still adapting to the new 'Sue'), she trampled past the protective circle I had set up around me to give me a hug. She definitely seemed more intact than I had previously known her to be and for what it was worth, she looked more alive than she used to. Still, the empty spaced out eyes was going to take some getting used to it. I honestly found that more distracting than her old body's exposed joints had been.

Yet, I couldn't help but focus primarily on the other visitor. It was a woman, I thought with some uncertainty. The creature was entirely jet and pitch in color, except for her four mask-like faces, all of which had eyes to follow me. I couldn't quite explain it easily, but her form made little sense. It always seemed to be facing me, regardless of any other movement. And while Siouxsie seemed comfortable with her, I had no idea what I was dealing with at all.

*Greetings unto you, witch.* I did a double take. It was a deep voice, almost mechanical sounding. It came from no source that I could determine, but in my head I could hear it all the same. I was quickly left to assume this entity was contacting me, because it didn't sound a lick like Siouxsie in tone or grammar.

"Telepathy?" I asked aloud, after taking a moment to adjust.

Our throat does not speak well,* responded the dark form. *We speak to you through the essence of shadow you possess. Respond in turn and We will know it.*

*Correct. Know that for now, only you will hear Us.*

*We are Atacama. We are shadow itself.*

Shadow itself? It suddenly ringed in my head, and I shivered. I knew what she was. The weird dark form, the white mask-like face... I'd heard of these. Everyone did. Shadow People were said to exist within the land and could show up anywhere. Most people could barely even see a glance of them, as they'd supposedly slip right out of view if you did. And none of them talked. They were also supposedly deadly to the touch.

*Do not suffer fear of Us. We are not here to harm you.* Her expression was unyielding yet calm. Intense, even.

*We of Shadowholme have become aware of you. You have been lost to us in the past, a missing babe in the forest of gloom. And long have you been gone. Only by the recalled presence of the one you call Siouxsie, have We found you. We find you within the dream of all shadows, that is, alive. Here, you have worked magick in an unexpected way and have done which has never been fathomed by Us.*

I shook my head, confused. What? *I'm sorry, but I don't understand quite what you're saying.*

Atacama tilted her heads to the side and drew closer, as her body remained forever transfixed at the same angle. *You have done what was impossible. You, child of shadow, have brought complete physical form to a mere skull of a corpse. You, who once bore the corruption of an entity, were the one who created the mockeries known as geists. Never has either task been done before by Our understanding. You, who are born of life and death itself. Your existence is an exception to rules thought to be inviolate.*

I focused on what she said, starting to get some of it. *Ah... are you saying it was impressive that Siouxsie came out like this? And that I made geists...?* She seemed to know a great deal about me. That said, I didn't fully grasp the meaning of all that she had communicated so far.

*Succinct. Although we are not friends of the geists, we recognize what you've done. Witch, you give form where there has been none. All through your command of shadow. As you put it, 'impressive'. In retrospect, however, it makes sense. You are born of three worlds in a way that no other has been.*

*Know you of your birth, witch?*

I thought on the subject. What did I know of that? I was only aware of what Bali had mentioned through her time with Ruukunda. But that's when it clicked.

*I was... stillborn,* I recalled from the account. *But my aunt performed some spell, at personal cost, and I survived.*

*Correct. Although it would be brief in the summary of all things, you existed with Us in the world of shadow and death. Only through perverse magick were you returned to life. And since then, you have lived more than one life, have you not?*

She was speaking, of course, about my earlier existence as the one who allied with Outer Hell, murdered for no reason, cursed Bali-la, and created geists, as well as who I was now. It was not a topic I enjoyed by any means. *Yes... but what's this three worlds thing?*

*In the land of dead things, you were as We. A shadow. However brief, you were as Us. You were never expected to return to life as you have, let alone ever. You are the only one to have ever existed as you do. That is why the shadow essence within you is overwhelming. You can feel it, can you not? Within your magick? Your very being?*

I gasped. It was starting to make a kind of sense now! How I was unconsciously able to unwittingly destroy Adelaide as I had! Why Outer Hell was so innately interested in me! How I needed to use magic to keep the shadow essence from overflowing from within me. I was... like Atacama?

*You are a threat to all that live around you. But you are one of Ours. So, We have come bearing a gift that only you could command.*

She took off her four point hat and placed it upon my head. It looked almost intangible as she was, black as pitch. It felt cool to the touch as it rested upon my hair and seemed to fit perfectly, although it was certainly a bit bigger before, between her many apparent heads.

*All practitioners of witchcraft make use of 'focuses', one known as Karolina. May this cap serve you in that capacity. Know it as a bond of your kinship with us and realize that it can be wielded to adorn yourself in shadow matter as well. Your own essence will fuel it.*

I remembered how Ruukunda gave me my first hat before I lost it in the Longtooth's village. The hat and my shovel, were the main focuses she told me about when she mentored me. Yet, this one was different. I could feel it resonate to my will when I thought about it. I wasn't sure how I knew it suddenly, but I felt like I could shape it just by sheer will, if I tried. It was interesting to consider, and something I wanted to experiment with later.

*Thank you for this gift. And... for telling me what you did. I'm not sure how to take the idea of having been a shadow person when I was just born, but I can't say I feel like I'm forgetting something integral about me either. Hmm. Maybe my older, worse self, might have known.*

*You are welcome, child of gloom.*

*So... where do we go from here?* I had the feeling there was more to this.

Atacama stood straighter. She seemed fluid, as if having no consistent height or width. Currently, she was much taller than I was standing.

*Progress in your studies. We believe it is possible you will bridge a gap between you and Us one day, through Chernobog's mark or your own wiles. It is a dream of many shadow-kind to be closer to life. As for your legacy, you are right to seek a way to defeat the geists your older self spawned. We fear they will evolve to the point where all others will be overrun one day, thus fulfilling the distant dead will of the entity known as Outer Hell. We shadows are part of the world, as are Xibalbans, humans, and many others. But the geists are corruptions of the soul and must not be permitted to continue.*

*Lastly, know that the way of all shadows is cursed. Remember this. You, We, and all marked by it. It is a path of doom and despairing, but one walked by many before you with different shoes. It can yet be traversed. That you have gotten this far is proof enough.*

*You will awaken soon. Remember who you are from before and decide on whom you will become, shovel witch. Your growth, as many in the darkness of Xibalba, has great potential yet to be ventured. For now, you should work with the one called Tulsan. You will learn why if you make there.*

*And when you're ready, perhaps you will know what the spell you cast was really for.*

*May we meet again, child of gloom. Farewell.*

Not a word had crossed my lips when I found myself laying in my blankets back in the cabin, with a black shadowy hat by side, Siouxsie nearby, and my companions cautiously approaching. When did I even pass out? How did I get in here?

Whatever the truth, Atacama and the concealing mists were gone and I was left with much to consider.