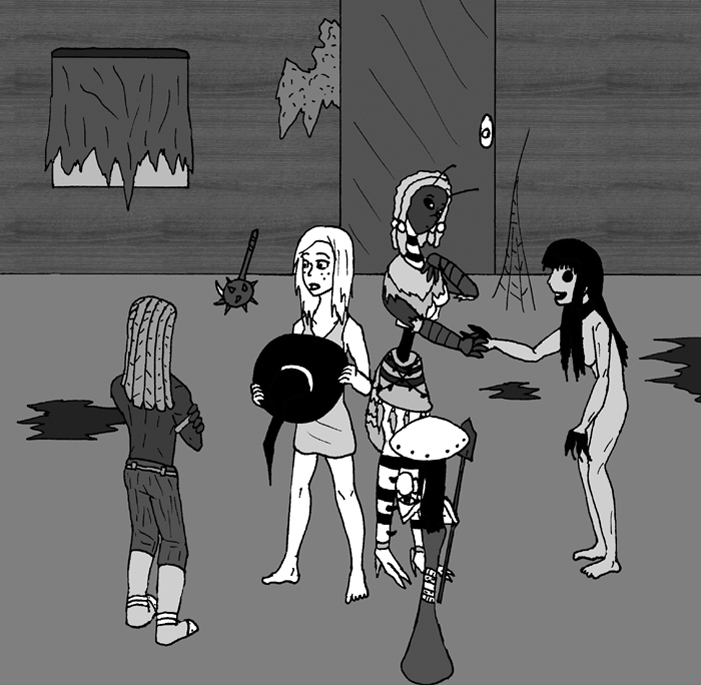 The witch learned that once the mists had cleared, they found her unconscious on the ground with the newly composed Siouxsie sitting idly next to her, along with her shovel and spellbook. They had heard nothing distinctive in all the time that would allow them to tell that anything was wrong. Additionally, they were warned against interfering from Tom, who was the only one who knew anything about magick on Karolina's level. Karolina's encounter with the shadow person known as Atacama was unfamiliar to them. And initially, they thought she made it up, until Siouxsie asserted that there had been another person there.

From there, they brought the witch back inside the fishing cabin and allowed her to rest and recover from whatever she went through. She was dressed in the old stretched out pink shirt they found here that she had been wearing as a sun dress. As for Siouxsie, they didn't have anything left to give her beyond Karolina's Longtooth skirt, but no one was completely comfortable getting too close to the zombie, not knowing if she was infectious like the geists were. At the same time, the zombie was at least docile, however weird looking with her eye sockets. Knowing that Karolina had intended to bring her back, they decided to just leave her be. For her own sake, Siouxsie followed wherever they brought the witch, telling everyone she was a friend. Whether that meant Siouxsie was a friend to them, or that the witch was her friend, the group couldn't determine. The zombie's language skills were poor at best.

Now, it was the next day. The witch had been out for hours before finding herself sleeping on the floor in a tattered blanket. "Friend witch awake," she heard the zombie slur out.

"She's been by your side this entire time," said a smiling Rottkap, nearby with the others. "I don't think she's that scary. I can't speak for Bel, though"

Karolina sighed contentedly, slowly rising from her position of repose. She had no particular response beyond a nod, as she glanced at Siouxsie, feeling more accomplished with what happened in retrospective. It was at this point that she began to explain what happened to her gathered companions, and in turn, she was told they never saw Atacama. But the hat was there and Siouxsie affirmed it, so they were left to assume Karolina's story was true.

"So, are we still good for the trip or...? Not to press you, but I feel like I need to get going on this." Tulsan asked, approaching Karolina. "I also get the feeling this is going to be a long road from what my dad told me." His tone was very straight forward. Probably not someone who minced his words, she thought.

Karolina had been focusing on her four pointed hat. True to what she had been told, she could slowly reshape it by focusing on it. It was very gradual, but sort of satisfying to do. Literally, mind over matter. Now, it was almost a replica of her old witch's cap, except more pitch in color. "Absolutely. Atacama in no uncertain terms said I should work with you on this. And I would have anyway, if just for Bali's sake."

"You really talked to a shadow person, eh?" he grunted, hands on his side as he studied the ground for a moment. She could tell he was leery at the thought. "I find it unsettling that it knew my name. I've always been taught to be careful at the mere presence of those things. Mrmph. Not that I've seen one, but you know... they have a lot of negative connotations."

"It... was a she, maybe? I don't know. Either way, Atacama seemed to know certain things. Maybe they understand things in a way that we can't. I don't quite understand it all, either, but I don't think she intentionally wanted to harm us. She told me things about myself that I've never heard before. Not from Bali's story or anything relating to my aunt. I'm not going to lie, but it felt like it made some sense to me. And this hat does exactly what she said it would. I've been reshaping it while I was sitting here."

"Huh," he uttered, noting the cap. "It does look completely different. Well... alright. So, apparently Bali and this Atacama shadow thingy want us to work together to help out... whoever this other person is at Uluru, the 'Navel of the World'. We just gotta find it. I'm wondering how important this person really is."

"Maybe she's ultimately not important. But, she was to Bali, at least," concluded Karolina. "I'm all for honoring her memory. That's what we do for loved ones not with us anymore. For the dead." It was a very familiar sentiment for Karolina. She had been trying to honor her entire village, even if she had unknowingly killed them prior to that due to an explosion of her own repressed shadow essence. Maybe it was fitting that Siouxsie was coming along. Karolina had no idea who she had been when alive or if the parts were all original. But she was part of Adelaide, no doubt.

"Alright folks, we're saddling up here!" Tulsan said aloud, getting everyone's attention. "Get whatever you need to get now, because we're not likely to come back here anytime soon."

"I've got your book and shovel, Kara!" said Rottkap, hopping over like some magic implement packing caddy.

The witch shivered briefly. Outside of her old identity, only Bali called her that. Had Rottkap ever done so? She couldn't remember. Yet, it was sort of welcome to hear. Kara would be her natural nickname, after all. "Aw... thanks sweetie." Rottkap was such a nice person, she had to admit. "I can take them off your hands. Speaking of which... Tom, are you here?"

"Present and waiting, Miss Karolina," she heard from the back of her hair. It was amazing how utterly light he was. He was almost unnoticeable half the time. And for her own sake, she noticed she was never terribly bothered when he was lurking back there. This hadn't been the first time, after all.

"We make trip now," said Siouxsie, inexplicably talking to Beltresz, who was keeping a safe distance. "I Siouxsie. Friend now, too?" she said, extending a clawed hand.

The velvet ant Harrier looked at those claws. She was not afraid to fight, not even geists, but to befriend a corpse like this? It was an unsettling prospect. Was the zombie infectious? Karolina didn't seem to care or think so, but just in case...

"Oh, um... sure, I guess so," the Harrier said uneasily, reluctantly raising her hand. "Um, why don't we fist bump instead? You know how to do that, right?"

Siouxsie looked at her clawed hand and then balled it up after a minute of thinking. Then, she slugged the Harrier in the arm where her forearm gauntlets didn't reach. Pow!

"Bel. Trez." the Harrier repeatedly, not liking that pronunciation at all. "Say it like that."

"Much better," the Xibalban acknowledged.

"Me so good," Siouxsie said cheerily, sensing accomplishment. She glanced around, observing the others. "That is witch friend, Ka-ro-lyna. Hat girl is Rott-kap."

"Hat girl?" Beltresz looked at the mushroom person with disguised amusement. "Yeah, that sounds right. Say, who is the cranky guy with the braids and sunglasses?"

Siouxsie studied him for a moment. "Is Tall Sand?"

The Harrier clapped Siouxsie on the shoulder, grinning. "That was PERFECT. Maybe this will be fun. Hey Tall Sand! Siouxsie and I are ready to go!"

"Yes! We ready!" chimed the zombie.

Her cousin, Tulsan, looked at her, vaguely sneering, not sure why he was being addressed like that. "I feel like I missed something. Well, whatever. Let's just go."

And with that, they began to walk in an easterly direction, just beginning to head deeper into the heart of Xibalban Australia, where none of them had been before.

Update will be tomorrow.