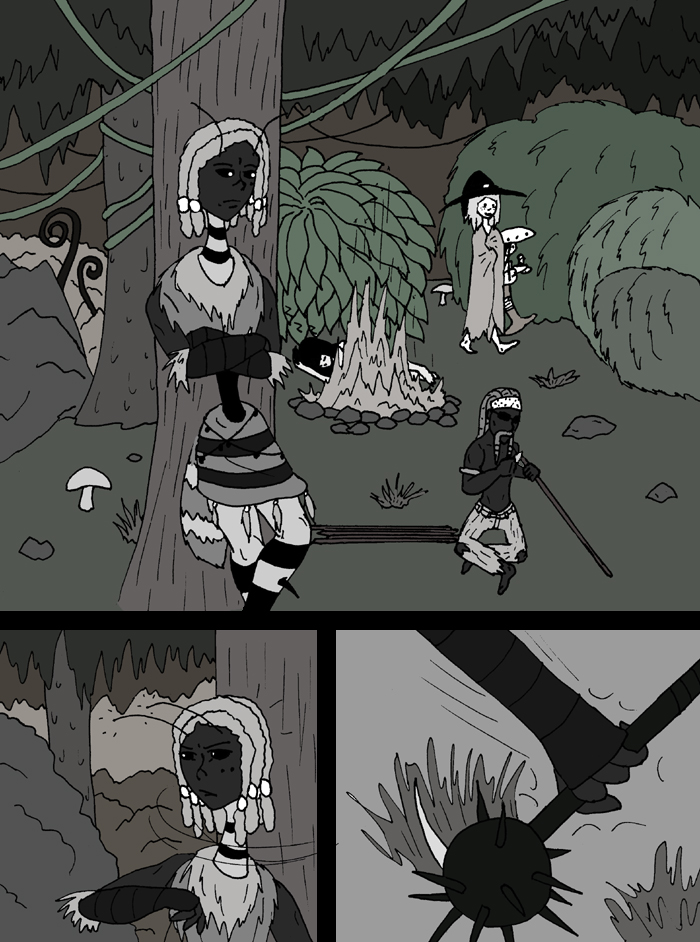 Not terribly long after their break, Tulsan was urging the group onward again. They hadn't far to go to reach the swamp and the gloom of Xibalba's night was setting in. It had been a long day of traveling, the first of many. He noted the others were more worn out from the hike than he was, suggesting they weren't used to his pace. Fortunately, all he asked of them was to reach the bog itself. It wasn't to say it wasn't a potentially dangerous place- Tulsan and his cousin knew better. But rather, there was at least cover, whereas they had come from plains with some occasional trees.

The humidity was sharp within the marsh. Beltresz didn't seem to be a fan of it, but Rottkap commented on the 'comfortable air'. Of course she would. But for his cousin's sake and to deter some animals from encroaching, a small fire was lit, encircled by a ring of scavenged stones. This would locally wring some of the moisture out of the air for Beltresz.

Once that was accomplished, Tulsan settled in and began to prepare some sticks to make into spears, using a stone shiv. He liked to stay busy, occupied, and active. Everything was direct and purposeful with him. Admittedly, he had a hard time relaxing on occasion. Before his father became much more easy going in his advanced age, he often reinforced the idea that his young son should not have idle hands in such a difficult world. It made Tulsan a good survivor, but stiff natured, sometimes struggling to enjoy himself doing nothing at all.

Beltresz was on guard duty. No one asked her, in particular, but she felt obligated. And she was arguably the tough one of the group, as far as she could tell. She was an Enforcer for the Harriers, and the duty would require keeping others in line, but she wasn't in a position of any authority in this group. It was difficult to reconcile. The zombie, while amusing, seemed dimwitted and often passive. Even now she was passed out by the fire. Apparently dead creatures slept. Who knew. In regards to the others, she knew Tulsan was completely capable, but he wasn't really a member of this pack, was he? He was mainly just tagging along, guiding, but not really in ranks with the pack's Alpha, Karolina.

And for all the power she supposedly possessed, Karolina had still not done anything in person that seemed leader worthy. The second in the hierarchy of things was the mushroom girl, likely. And that one was even more useless, however pleasant and non-confrontational. Beltresz had seen the orange eyes on that one. A mushroom 'tribe' envoy who was of fairy origins... stories about the fae being less than combat capable was well known. They were supposedly naturally good shape shifters, but too gentle for this world. Of course, Beltresz might have changed her opinion if she had ever met Bali-la, as the latter was uncharacteristically possessed of martial talents for her kind.

Still, Beltresz leaned against a tree, boredly monitoring the surroundings for noises as she felt no one else save her cousin was bothering to be useful. Even at this moment, the shovel witch was ducking into some bushes for privacy with Rottkap in tow, who held the weird little familiar, Tom. "We'll be right back!" she heard. She noted the witch was holding the cloak around her as if she planned to unveil herself in privacy. It seemed suggestive, but the Harrier managed to eventually overhear chatter about the whole skyclad thing from Tom. Knowing nothing of magic, let along witchcraft, the Velvet Ant shrugged. It was always hot in Xibalba, especially right now. If Karolina wanted to drop trouser for practical reasons, Bel wished she would just get on with it. She had learned the Xibalbans were not modest at all and that such shame was an older impractical human notion. Even her cousin just ran around in ratty old jeans.

That said, she felt a tinge of envy. Karolina was more or less shapely, compared to her own oddly proportioned Harrier body. There were definitely days she regretted the actions she took to be a Harrier, although they were mainly based out of a dream of flying. Instead, she got stuck looking and being as she was, stick-like and yet bulbous. It was a strong body, but she never was truly uncomfortable in her new skin.

One way or another, while she was content to have the company of her cousin around, although he wasn't much for chatting, she still didn't care much about this group. None of them seemed like they could survive on their own for long. So, although she didn't hate them by any means, she was deeply underwhelmed by the presence of a magical novice, a dull minded zombie, and a small fungus girl that even the mushroom goddess seemed to have no use for.

Still, Beltresz sighed. Maybe she belonged in this group in all truth. After all, she had no meaningful place amongst her own tribe either. And that made her rather useless, as she had earlier observed about the lack of necessity for her caste in that clan. What good was a tool that could never be used? Or a soldier that was never to be deployed anywhere?

Suddenly, her antennae twinged. They picked up movement some hundred yards from the camp, pinging from faint sounds and vibrations. It was somewhere in the foliage, in the opposite direction that Karolina ducked off to. Whirring about, she listened intently, hearing only Tulsan's spear sharpening in the background. Whatever it was, it was moving slowly, possibly stalking or lurking. And at that distance, it was too close for her to ignore.

Scooping up her spiked mace from the earth, she alerted Tulsan to a nearby presence. "Watch the camp. I'm going to investigate."

He muttered a non-committal affirmation as she stealthily dashed into the underbrush in an attempt to sneak up upon whatever was wandering out here at night, or at the very least, intercept it. Maybe she could be useful after all.