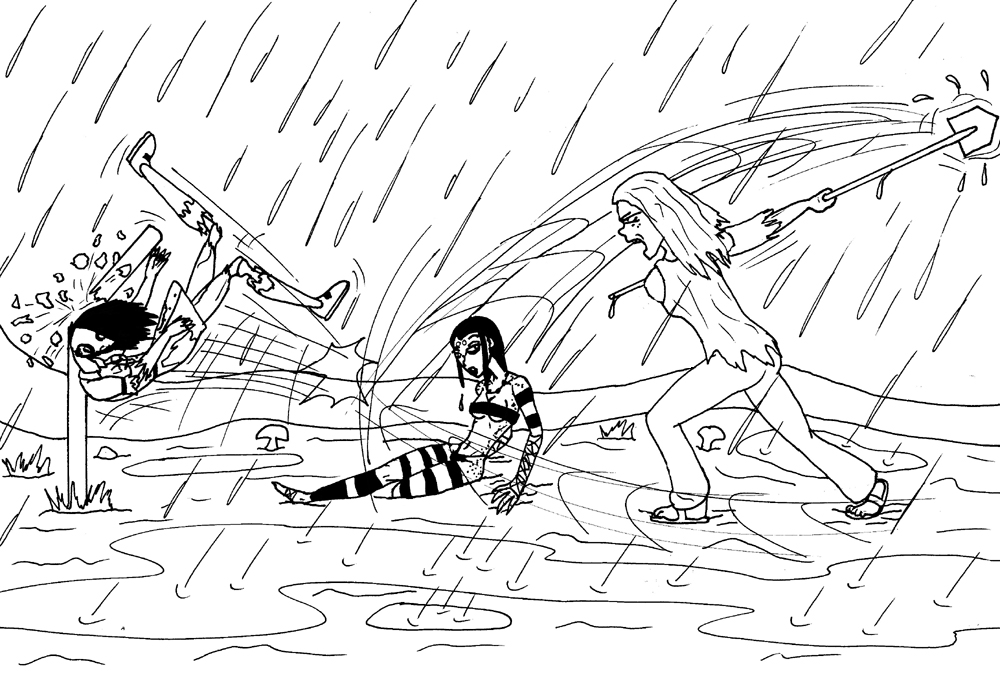 As a storm might approach silently with gloomy clouds, so did Karolina. Bali continued to wrestle with the creature, rarely taking any attempt to make an attack, so much as seeming to intentionally stall the zombie woman. There was probably a good reason for it, but it wasn't the time to ask, nor ponder.

A twitch forming in her eye, the shovel witch fixed her grip upon the far end of the spade. She waited but a moment for Bali to be less at risk, not wishing to harm the Xibalban. It did not take long. Perhaps it was simply chance or something Bali-la picked up on, but the zombie and her opponent momentarily separated, as Bali slunk backwards into the wet saturated mud of the graveyard.

Suddenly turning angry from a once solemn expression, Karolina howled into the storm at the zombie. "That's enough! Back to the dirt with you!" Immediately, she swung her shovel, with the lateral part of the spade's edges facing vertically, as if trying to avoid slicing the corpse.

It struck with a deafening wet clang, as old sturdy metal kissed the face of the animated zombie. She pitched violently backwards some five feet; her body rag dolling and flopping with legs akimbo in the air. The dead woman struck the flat of a nearby tomb, breaking it in half over the back of the head and neck. As pieces of stone exploded, the zombie slunk down from the grave marker, collapsing in a heap on the soaking earth.

Bali glanced back and forth, silent. It was an incredible hit. Brutal, even. Although the shovel witch was probably strong from her many physical tasks and the zombie was much lighter than a normal person, the force with which the ghoul was struck seemed beyond what could be expected. Regardless, Bali could not help but admire the prowess of the attack, as Xibalbans tended to associate hand to hand skill as a survival trait worthy of respect. And more to the point, it made her notice Karolina in a certain light. Perhaps it was time to soon share words about certain truths.

Karolina seethed, catching her breath, her hands trembling as she slowly lowered the shovel. She glared at the zombie, a walking embodiment of her failures and self loathing. On one hand, knocking the ghoul back seemed necessary, if Bali was to be saved. On the other, it felt liberating, as if she had actually pummeled something inside of her that she hated. "Are you alright?" she asked, never looking away from undead Siouxsie.

Bali nodded calmly, despite what transpired. "No harm done. Not to us, anyway. Mm, that was quite the hit there, Karolina."

The shovel witch ran her fingers through her own wet hair, now dripping and becoming tangled. "T-thanks. I didn't expect her to go flying back so hard."

"Do you fight often?"

Bali stood up, wiping the mud off her backside as the rain cleansed her soon of the rest. She then approached Siouxsie and crouched, investigating the corpse woman.

Siouxsie's eyes were completely blank now. Not even a hint of red, just a vacant white stare. She demonstrated no motions beyond a simply twitch of her bony fingers. "Don't know, but if I was to guess? I think that stunned her. Her head might be injured."

"Then I should finish the job," said Karolina stepping closer. "I've already let this go on too long."

"Wait," cautioned Bali, raising a palm. "Let's not be hasty. You said she wasn't quite like this when you first raised her? I think we should give her a chance."

"What? That's ridiculous. You saw what she did," Karolina protested.

"She was feral, Karolina. She couldn't help herself. And you mentioned you never fed her anything. That probably caused her to lose her mind like this. We should give her some meat- she might come around."

"Really?" Karolina sighed irritably. The whole idea seemed absurd. "Bali, she's a zombie. What are we supposed to do with her? Have a tea party after she has a snack? Come on."

Bali stared at her. "You brought her back to this world like this. Maybe killing her is the easiest solution, I won't deny it. It could even be said that putting her down is more than justified. But is this how you treat a responsibility? An error? Just kill it, bury it down, and repress any involvement?"

The shovel witch trembled, her face red with embarrassment. It stung to hear such an accusation. Who was Bali to say anything like that to her? And yet... it was that burning condemnation that Karolina wanted. Something she needed to hear from a third party, to make it clear to her that what she did was not simply wrong in her own eyes. And that she could be better than this sort of behavior. For she knew, but she could not bring herself to understand. Not until it was shoved in her face.

Karolina winced and for a time, simply looked away from the Xibalban and Siouxsie. But she couldn't escape that gaze for long. "What... what would you suggest?"

"Simple," began Bali. "Just give her a chance, as I was saying. If she's still unstable after she has some meat, well, there's not much that can be done other than to end the suffering in a merciful way. We need to see that there is someone in there."

"She is going to hate me. Maybe both of us, you know," Karolina warned. "After all, I did just smash her face in."

The Xibalban chuckled. "Well, perhaps. We won't know outright, but if it helps, I doubt she will."

"When someone is feral, they're mostly on what humans would call 'auto pilot'. Generally speaking, people in that state of being cannot easily control themselves and they often do not remember things that happened. Or at least, not details. That she managed to lure us there was impressive, I'll give her that. But that aside, she might return to how she was before, if fed well. I think she is in a state of degeneration from having been left feral for so long."

"Well then. I guess we bring her back? I'll admit, I'm not keen on having her inside the tower. Feels like an accident waiting to happen."

Bali grinned and spoke with a wink. "Don't worry. I can make sure she's not going anywhere. Leave her to me. Do you think you can rustle up something for her to eat? As long as it is meat of some kind, I don't think she'll be picky."

"I don't have any right now, but I might be able to catch a rat or two. I've got some traps laying around."

"That will do. Anyway, let's get back inside before she wakes up or we have geists breathing down our necks. Visibility out here is too poor to see if they're around."