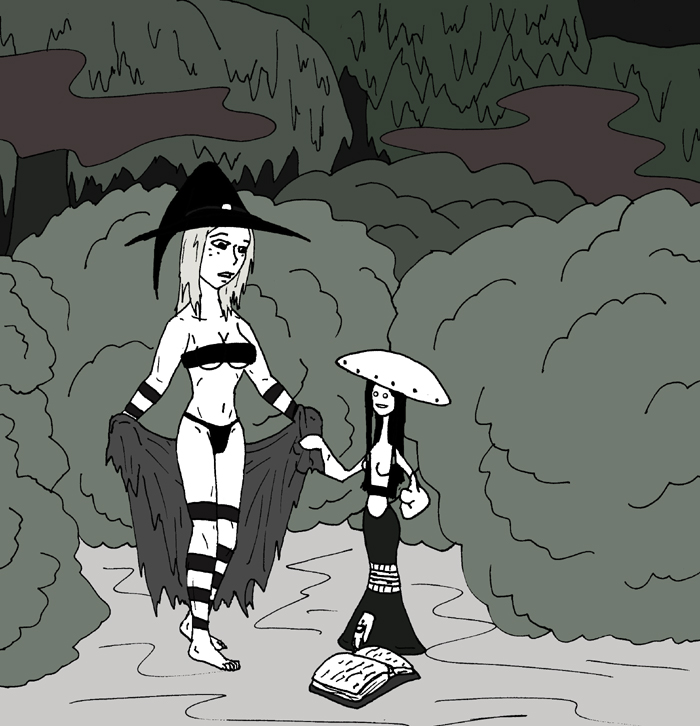 Within a copse of bushes, the shovel witch observed Tom and Rottkap set down her spell book. "So, how does this work?" she asked of the familiar.

"It's not too difficult. You're going to take a black page in your book and write down some symbols that I'm going to tell you."

"Write? Uhm... with what? I don't think any of us brought any charcoal bits or anything."

"It wouldn't be enough to simply scribe it," the hand said. "This is one of those things you're going to write with a spot of blood. Namely, yours and mine intermixed. It represents the trust of a familiar and my consent to learn our formula. Your blood seals the spell on your side."

"Blood, huh?" she muttered. The idea was a little skeevy for her. "And this will work?"

"Have I led you wrong yet? Unless you want to wait for Chernobog or whatever to grant you such a spell, if he feels like it, this is your best way to learn something new under your own choice and power. That's what the blank pages in your book are for. Sometimes, magical beings like myself have a calling card of sorts. In this case, someone else could recite the spell and it wouldn't work. But with your blood etched on the page, the formula is bound to you and you alone through our cooperation. Keeps it safe from thieves and such, really. It's a good system. It also aligns your familiar with you and you alone."

"Well, you're right, Tom. You haven't steered me wrong yet, it seems. If you think this is a good idea, I won't say no."

"Have some confidence, Karolina. And like I said, having a familiar with basic rote and ritual when it comes to this stuff. So, prick a finger and I'll bite my thumb. We'll pool what comes out onto a leaf and you can use that for ink."

Rottkap provided one in short order. She wasn't asked, but she was happy to be helpful. "Thank you, Rottkap," Karolina said graciously.

"You're welcome, Kara. So... um... you've been clutching Brand's cloak over yourself this whole time. What's that about?" asked the mushroom girl.

Karolina smiled sheepishly. "Just thought I'd get used to the idea here, y'know? It's easier with slightly less eyes on me. If I'm going to benefit from that sky clad thing Tom mentioned, well, I decided to go all in. Don't laugh, okay?"

With that, Karolina slid off the dusky blue cloth from Brand and revealed herself dressed with a great deal less than normal. Having made use of the shadow matter from Atacama's hat to give herself clothing, she didn't employ much. But then again, that was the point.

Indeed, it was very similar of Bali's minimalism and style. Except instead of being leather based, Karolina's version was made from shadow matter into solid form. She stood humbly, wearing Bali's bandeau strap around her breasts and the small matching black thong on her hips. Further, she had played around with what the hat could do, and gave herself a variation of Bali's dark stripes. Two stripes were banded on the forearm instead of the bicep, and her knees had a single band above them, with three more ringing her shins. It was not the same, but certainly reminiscent.

"Bali was a big influence on me, I don't discount it," Karolina said. "I admired... heck, 'admire'... her confidence, her free spirited nature, and everything that so clearly was not myself. And yet, despite everything, she embodied things I would wind up wanting to be. That said... wow, this has a draft to it. It's, uh, kind of nice not be drowning in stifling clothes. All of this is going to take some getting used to. And probably needless to say, but I was never allowed to wear something like this back in Adelaide, even if I could've gotten my hands on it. My mother would have KILLED me." She sighed, but chuckled a bit. "Well... here I am world. Practicing magic, hanging out with a hand and a mushroom person, dressed like this... guess I'm not a complete kid anymore."

"Well, I think it looks good on you with the hat, Kara," said Rottkap, trying to be positive for her friend. "I wish I could look like that, but I'm just a stump. You have a strong form, Kara, don't be worried. Xibalba doesn't judge as humans apparently do."

"This is all well and good," Tom started dully, "And I'm glad you're coming to terms with yourself, but maaaaybe we could get started here? It's getting late."

"Ah. Yes, sorry. Let's begin," said Karolina, feeling slow growing confidence in herself. She gnashed her ring finger until it began to bleed. Wincing, she let the blood drip onto the leaf palette and Tom did the same.