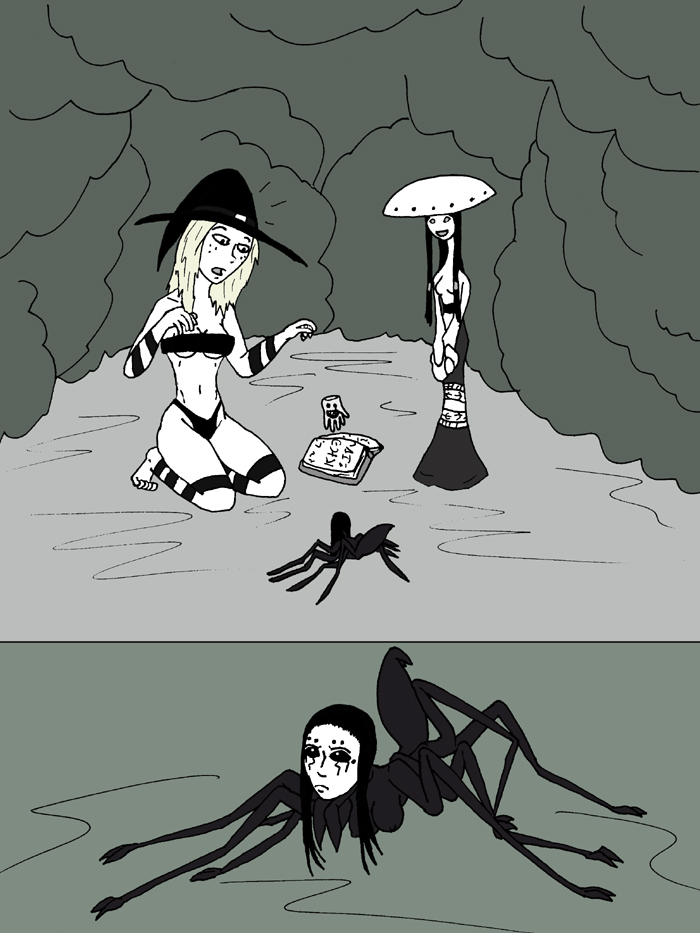 The ritual, surprisingly, was not hard. In truth, the formula wasn't much more complicated than the other basic spells I knew how to do. But it was a proper ritual nonetheless, like the one that restored Siouxsie, so it took a little time. Tom mentioned it looked like a proper competent casting, so that was good. That said, I guess basic spells are all I really know how to do still. I need to work on that.

"If things don't work out or your familiar is lost, repeat this ritual and it'll undue the conjuration," Tom Thumb said. "It'll put a familiar into an invisible stasis or reform it, as needed. Personally, I don't like being unsummoned on a lot of levels, so keep that in mind. I can't imagine any familiar would."

As my familiar began to form, my vision wavered for a moment and I felt a bit off. I also became aware of the creature developing in front of me. It was a completely new sensation, as if it were my arm, but not attached. I found it jarring at first, but I couldn't deny it was interesting, like a new sense to join my sight, hearing, and so on.

"This creature is part of you," he continued. "If you close your eyes and focus upon it in your mind's eye, you should be able to see through it and hear what it hears. Some of your spells should be able to be cast through it, too. Same process. Of course, I don't know which of yours would work for it. Typically, rituals like this and the one for your zombie aren't among them."

"It's coming into focus!" Rottkap said excitedly, clasping her hands together. We all looked closely.

I don't know what I expected, in all reality. Tom was a detached hand and the only familiar I ever knew. But weren't there stories about crows, toads, and black cats being common? Maybe Xibalba put its spin on this, too?

It was a spider. Or rather, something like one. A dark grey muave body, just a bit bigger than my spell book, with spindly legs and an ant-like raised abdomen. The front, however, wasn't like an animal. It was a stark white face with jet hair, with black eyes very similar to Beltresz, and jagged little lines and eye dots running down around the eyes. There were even small shoulders where the legs began and a little feminine chest hidden behind... what's the word, chelicera? Her face caught my attention, however. It was more articulated and vastly less ridiculous than Tom's. She stared at me with a cold expression and weirdly, it felt like I was almost looking at myself. Still, I didn't know what to make of this. How was it determined what a familiar would look like? And why this? I wasn't upset, mind you, just confused.

"Uhh, Tom?" I glanced asked aloud, side glancing at him.

"You tell me, Miss Karolina. This creature is a direct extension of you. From what you've mentioned about yourself, you've got some odd shadow essence in you. You just claimed to see a shadowperson and all that went with that, which might account for that face. As for the spider? No idea, but it's not uncommon either. Maybe some influence from that Bali-la woman? Only you would have an idea about what exactly is going on inside."

Was that how it worked? I guess it made sense. Tom's face was almost identical to the bag head that Brand had. Still, this was a reflection of me? Is this what's going on in my head? My soul and spirit?

The familiar tilted her head questioningly and just stared. It was a little uncomfortable, I must admit. I wasn't sure why, but she was a bit creepy looking in some ways.

She nodded her head slightly, but offered nothing.

"Hmm. Well, uh... what should we do for a name?" I was supposed to name her, right? I couldn't recall if Tom Thumb called himself that or Brand named him. Fortunately, the topic was clarified quickly.

"I have a name," the familiar trilled, ever staring. It was a low yet direct voice, with a hint of buzzing.

"You do?" Wasn't she just created?

I blinked. What a mouthful. "I see. Huh. Well, if you don't mind me asking, how did you get your name?"

She tilted her head again, this time in the other direction, which make the claw-like ends of her hair dance. "We named me this. You. And I."

"I did?" What the hell was she talking about? How did she name herself with my assistance?

She shrugged, seemingly disinterested. "You are Master. I am Metis," she stated as-matter-of-factly. "That is all." She glanced at the others, but seemed unconcerned with them.

Although she was of my being, I could definitely feel a line of difference and independence between us too. It was probably like what Tom was to Brand, and how Tom could speak his own mind. I would have to remember that with Metis. She was connected to me, but still her own being. I could tell this union was going to be tricky.