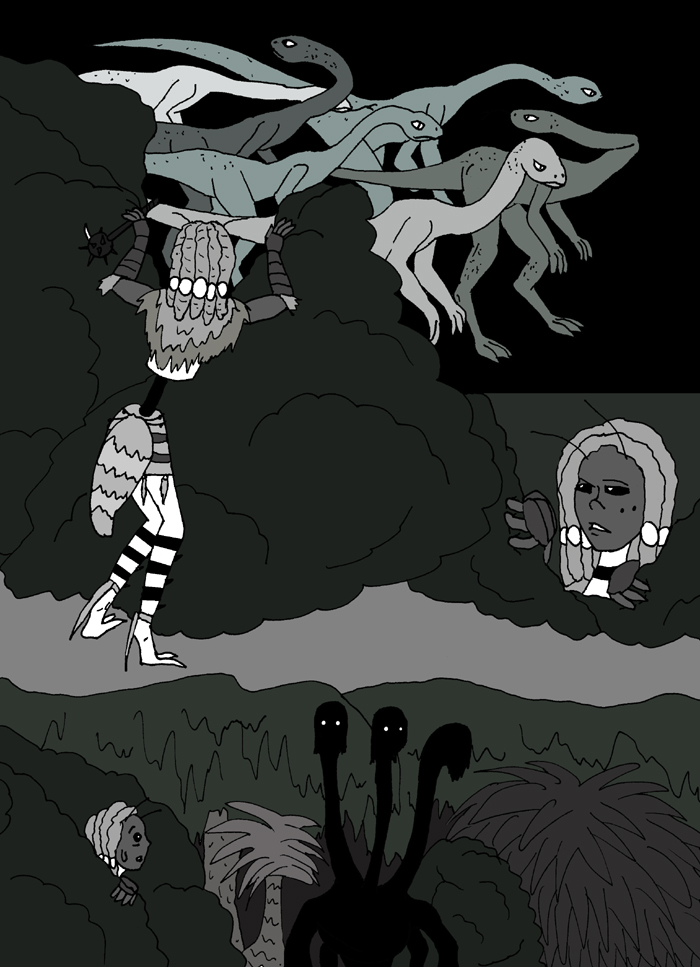 Beltresz made her way through the underbrush, having followed the background noise and vibration, feeling the tinge of each disturbance upon her antennae. Crouching through various concealing bushes, she soon located the source. A pack of dinosaurs!

Not terribly big ones, however. They were approximately of a common man's height and somewhat common in Xibalba. They were called coralsaurs, a turquoise skinned raptor-like species with long serpentine heads. And although the saliva of these creatures was acidic, they were not an outright danger. Rather, they were primarily scavengers and insectivores. Her adopted people, the Harriers, had actually introduced her to the idea of eating them in the past. Although she generally preferred plant matter as one under the sway of the velvet ant (as compared to her waspen brethren), these dinosaurs had a consistency similar to pork which was not entirely bad. And for a time, she considered if it was worth the time and effort to wrangle one down via ambush. She'd take some scrapes, she was sure, but the pack probably wouldn't have stuck around long if she panicked them. They did need food, after all.

But as she studied them, she noted their behavior seemed cautious rather than looking to hunt. They stepped carefully, moving smoothly as they were known to do, but glancing behind themselves as they did so. It was not a hunter's pose at all.

Something seemed to be wrong. But what? Uncertain, she decided not to cull one for her group. Instead, she waited and watched. What was making them uneasy?

After they escaped her view behind dank swamp trees and brush, it was not more than a minute later when a lumbering form emerged. It was slow and ponderous, but almost completely silent. From what she could tell, the creature was squat to the ground, with four legs and a broad tail. But it possessed multiple heads, on long stalk-like necks which reached into the tree canopy. Recoiling and remaining silent, she could not make out the creature exactly, but she didn't recognize it either.

"Some kind of monster? What is that thing? Was it hunting the coralsaurs?"

Out of instinct, Beltresz took a risk assessment. This was nothing she wanted to fight on her own- and she wasn't sure she even needed to. But wait! The camp! They had a fire lit. Would it attract this thing? She knew although animals would often avoid a flame, monsters were unpredictable. And her team, save perhaps her cousin, was not composed of fighters as far as she knew. The zombie was sleeping. The witch and mushroom had wandered off to conduct some ritual, which involved making some noise. Beltresz realized they could have been on bad footing if this beast decided her party, located relatively nearby, would be easier game than some cautious dinosaurs.

"Crap. I better get back to camp pronto. We need to extinguish that fire! And maybe Tulsan would have an idea what this thing is. He's the big hunter, after all."

As the creature's heads scanned about, Beltresz slunk back into the brush and hurried to return to the camp.