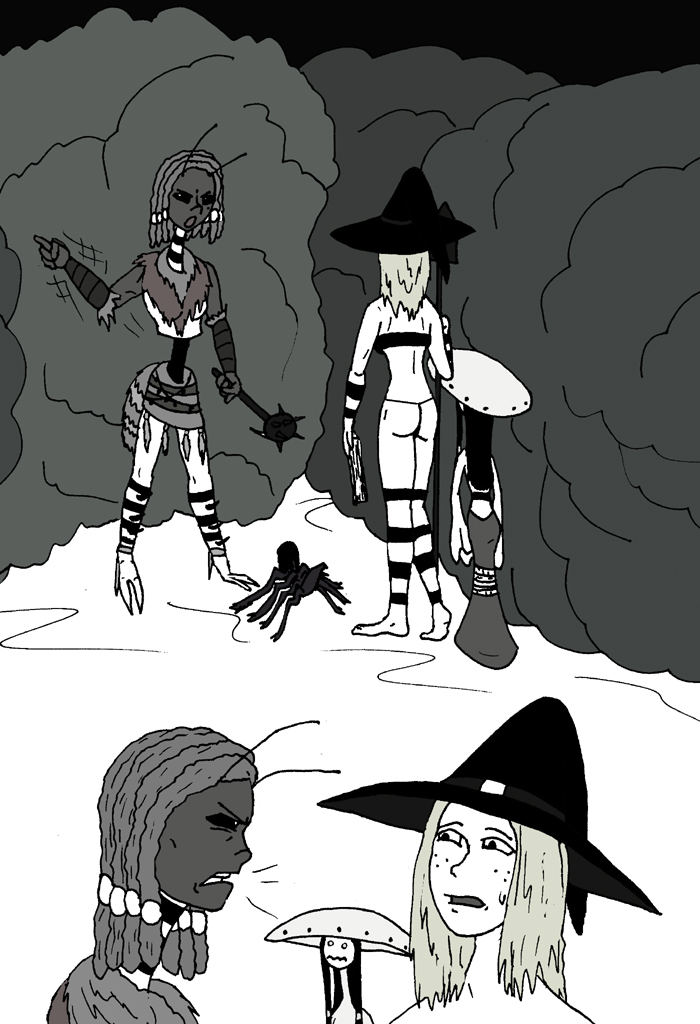 Several minutes after the familiar ritual was complete, Rottkap and I were packing up, preparing to head back to the others. I heard a little noise from past the bushes, but I didn't give it any thought. Tom was back in his usual hiding space. I looked to Metis, wondering she'd try to do the same, but she was a big larger than Brand's familiar. I think she knew it wasn't worth trying (I only have so much hair), but she didn't ask for a ride one way or another. I guess I thought I'd have a natural rapport with her, since she was supposedly a part of me, but I guess that wasn't how it worked after all. Maybe we'd get more comfortable as time went on, as she seemed a bit quiet and indifferent for now.

Just then, Beltresz came plowing through the underbrush, spiked mace in hand, looked rather rankled.

"Tell me you're done," she said, after a moment of looking us over. "We have a problem."

"Ergh, I'm going to make this quick. I heard a noise in the swamp. Investigating, I saw a big long necked monster. So I went back to warn Tulsan and extinguish the fire. The plan was for all of us to lay low until things passed. So the monster is wandering closer and I was about to warn you guys, when your zombie sees the thing and.... and she goes to say hello to it!!"

It took me a moment to process this, but a familiar dread hit me. Wasn't this similar to how she got ripped apart before at the Longtooths? Siouxsie made herself too obvious and they killed her for being a kind of foul creature, while Bali and I were gone. It was too much to ask Siouxsie to have stayed quiet. Then again, I last saw her sleeping by the fire and I had no idea there was even a monster nearby. Damn...

"Now my cousin's back there, trying to hold the thing off by himself. You need to get back there and help out! And I'm just putting this out there, but it looks like one of yours, if I understand the situation."

"A geist!" Beltresz hissed. I didn't get a great look at it, but it looks like one of those things. You or your past self made them, didn't you?? This thing is some kind of geist-like monster. My cousin had better not get infected from that damn thing!"

"Crap!" I grunted. "Alright, show me! If that's what it is, I have a spell to deal with it. Rottkap, you might want to hang back when we get there. You too, Metis."

"Er, right!" nodded the mushroom girl, while my familiar just looked at me with seeming disapproval. Did she not understand this could be dangerous? Tom certainly knew to lay low. Maybe it was an issue with experience?

We hurried back to the camp to help Tulsan, as I chastised myself quietly for not instructing Siouxsie about being safe, now that I had her back. And I really hoped this thing wasn't a geist like Beltresz thought. I still didn't understand what compelled my old self to be such a complete menace, but damned if I was going to let her mistakes to continue to run rampant. It was time to knuckle up.