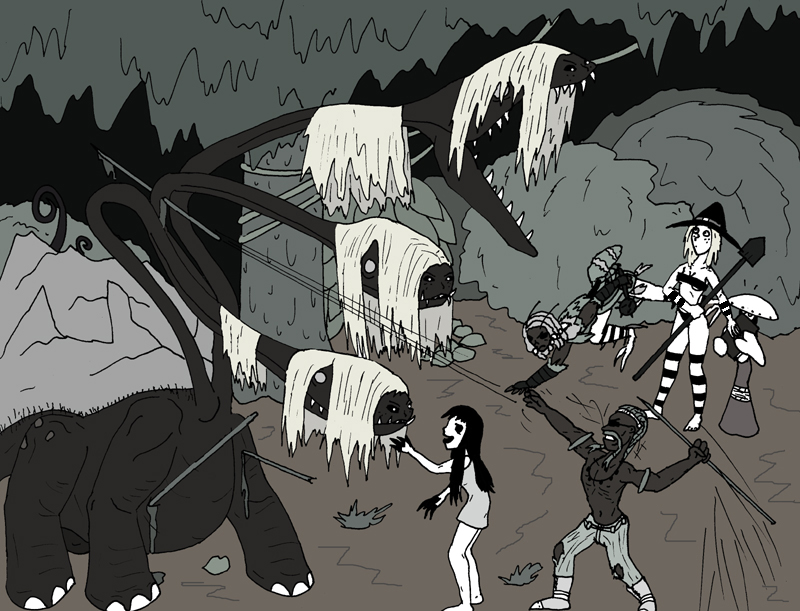 Rottkap and I rushed to the scene, as Beltresz dashed ahead even faster to help Tulsan. And there it was... a weird looking four legged dinosaur-like creature with a stout body and three long thinner necks which terminated in boulbous heads, lined with teeth. Tulsan had already been throwing his makeshift spears at the monster, but it seemed almost unconcerned, despite bleeding from each successful throw. Instead, it variously just glared at us, with Siouxsie trying to pet one of them. I handed my book off to Rottkap and motioned for her to hang back by the bushes, as I was about to attempt to get Siouxsie to back away.

It was then that I happened to lock eyes with the thing. A second set, really. Where it's nose should have been, there was instead a face with black eyes stretched across the maw and nostrils... and even draping blond hair.

I shivered, finding the site so utterly grotesque and lurid. I could even feel the tension of warped shadowy energy all about it, the same that reminded me of a geist. Beltresz was not wrong. Only, she failed to mention this thing had a semblance of my face... on its face. I wasn't sure whether to be scared, confused, or disgusted. And to my shame, I hesistated, gaping.

The thing roared at us, particularly as it saw me. It knew who I was.

I was reminded of Tulsan's story, about the last time he saw Bali-la before she departed in the DreamTime. How they fought a mutated compilation of limbs, faces, and legs, all which supposedly resembled me. And it had the mentality of my old self, Kara. This was something similar, no doubt. And I knew exactly what had happened.

I knew the geists were mutating gradually as time went on. Bali's story of Kara explained that much, but I saw it for my own eyes back in the sand cave. They were each different looking, not simply blackened puddles resembling people. And they were to some degree infectious. Given the look of this monster, I couldn't help but assume there was an original monster out here in the swamps and it encountered a geist, causing it to become infected like this. Was that what happened to Tulsan's friend Astrile?

Although Kara and Outer Hell inside me were effectively lobotomized from Bali's hypnosis, the geists must have already had their collective thumb prints. Now, they were growing, getting worse, if not simply more dangerous. If they could already start to do this, how far would their infection spread and develop? The geists in the sand cave were weak, even by my less than worldly understanding of things. This was something else entirely- my old identity's legacy had just become much more daunting.

Staring at me, the hydra-like creature smirked with that twisted Kara face on its snout. "Can mother come out and play?" it groaned breathily. "No one cares about the house sitter."

For a second, I felt numb. Detached. Not exactly scared, but instinctively horrified and repulsed all the same.

I am Karolina... I am not that psychotic mistake from before!
Gritting my teeth, I gripped my shovel tight.

"Time to die," I whispered to it, feeling icy black hatred in my palms and throat.