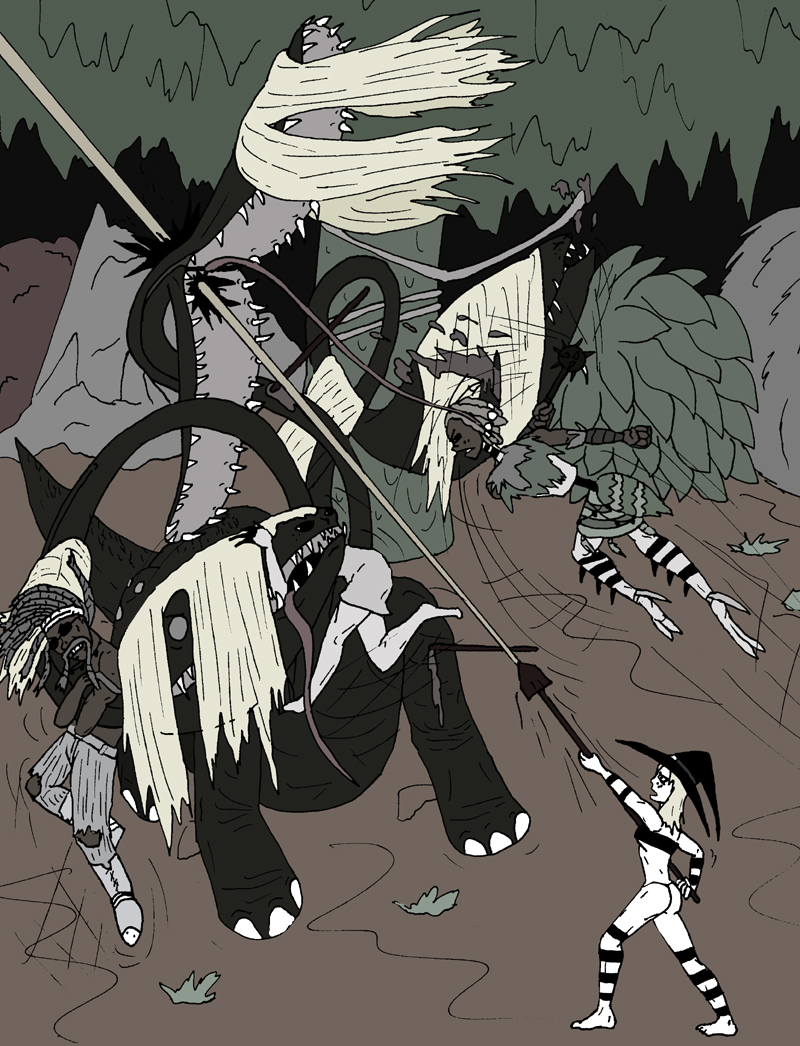 Chaos broke out and soon, an all out melee. The 'Karahydra' grew disinterested in Siouxsie's attention with one of it's heads and promptly snapped her up, lifting her body into its jaws. She flailed kicking and making a fuss, now realizing the creature was not her friend beyond the vaguest semblance of a face on its snout. Realizing what was sure to follow, Tulsan ditched his javelins and dashed in. They didn't seem to be having much effect in the first place, as the creature bled but didn't seem particularly fazed. Running up, he tackled the neck of the one attempting to eat Siouxsie, squeezing it tight so that she couldn't be swallowed. He wasn't sure if the creature could eat a person, as while the head was large and bulbous, the neck was much thinner and stringy. But if it was anything like a snake...

This, of course, left the other two heads. Wasting no time, Beltresz charged the head on the opposing side of the body and smashed it with her spiked mace. It recoiled, bursting out a spurt of hot blood. In the castes of Xibalban society, an Enforcer wasn't trained as a Warrior or a Guard exclusively, but with a mix of the two schools of occupation. Hers was keeping members of her own kind in line from dissension, punishing any who would be lazy, or willfully useless. And as a Xibalban taskmaster, it was made clear to her early on that her adopted kind were usually pretty solid. So, one had to learn to hit hard enough to motivate while not doing too much real damage. Fortunately, her tough new Harrier body and the spikes upon her weapon did a good job of 'encouraging' others.

For her, the fight was catharsis. She was itching to blow off some steam from the last several days events. The Harriers didn't need her, and Karolina had no particular use of an Enforcer. She was too back seated, too passive usually. She lacked the hard edge of the Xibalbans. She just felt useless, and yet, still stronger than her current Alpha. As such, she was all too happy to inflict harm on this monster, whatever its story was.

As for Karolina, she was not being passive now as Beltresz often thought of her. This was not her first time fighting a geist by any means. The creature also offended her on the very nature of what it was, a mockery of herself. Although to no doubt, the creature probably considered Karolina a sham of her earlier Kara persona. But it didn't matter.

There was one spell and one spell only worth using on such a thing. Quickly reciting the words to herself, she pointed her spade at the middle head of the creature and blast a hole clear through its open maw. It peeled back grotesquely, roaring, as the head area's fang rowed mouth actually extended several feet down the actual neck.

"Plenty more where that came from! I bet you felt that, huh?!" The shovel witch was not going to take the creature's sass quietly.

But while the creature fought with the party, there was yet another being lurking nearby. And this creature was not interested in the fight itself, but with the mushroom girl hiding in the nearby bushes. With everyone distracted, it was finally time to make a move...