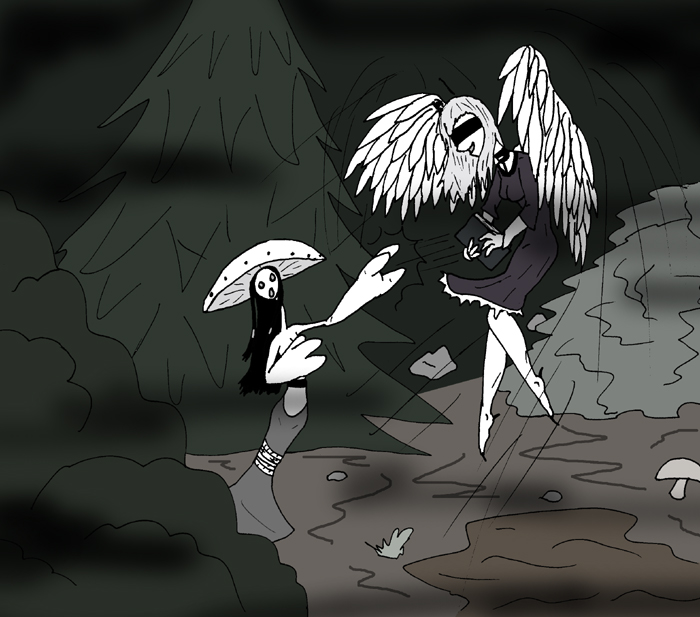 The little mushroom girl, following Karolina's more than sensible request to hang back behind the bushes (and thusly out of trouble), watched as her friend and fellow party members battled the Karahydra with weapon and magic alike. Somewhere nearby, she thought Metis was lying low too, but the tiny familiar was lost in the brush as far as she knew.

She was holding her friend's spell book, for safe keeping. Didn't the witch need the book open to that hand symbol or something? Or a spell? Didn't seem like it now, for some reason. Maybe Karolina was picking up skills from her rehearsals with Tom Thumb.

Watching a battle was interesting. Particularly as she wasn't in it, unlike the time the Longtooths were on the warpath. Being rather small, soft bodied, and lacking anything offensive not immediately granted by her goddess for political punishment, Rottkap was quite aware she was the weakest member of the group, not really able to contribute much of anything in a scrap. Her main assistance was to Karolina, and that was mainly as a caddy of her belongings and as a confidant, as the witch seemed to genuinely enjoy hanging out with her. Which of course, was a good feeling. Rottkap felt the same. Everyone needed a friend. Fairies, regardless of clan or grouping, were social minded. Rottkap was not different.

But she was starting to feel bad as she rooted for her friends. Would she ever be able to contribute? Fighting could be scary, but Xibalba was partially defined in violence. It wasn't strange by any means. She just didn't know what to do. No magic, no real strength, weapon training... nothing. She just existed until her goddess had something for her to do, which was rare at best. Maybe Mr. Tulsan or Ms. Beltresz could show her something, she thought? They seemed capable. She was certainly no witch as far as she could tell, so Karolina probably couldn't help.

Suddenly, while lost in observation and thought, she felt the spell book swiftly leave her large soft hands. "H-huh?" Twisting around, she saw an unfamiliar flying woman with an eye binder and white wings, dressed in a purplish gown, grasping it. Rottkap had no clue who this person was. But Bali-la would have.

"At last!" the angel exclaimed, rising up. "No offense, but this is far better in my hands! Lord Chernobog, behold! I have your heart, after all these months of stalking and waiting- give to me your love!"

"HEY!" squeaked the mushroom girl. "That's not yours! Get back here with that! My friend needs that book!"

"Again, apologies..." the angel replied, still grinning ear to ear. "But I've wanted this far more than the witch ever did. I LOVE Chernobog. I doubt she is even more than a little aware of him. Now Chernobog can teach me his magic and it'll be a sign he favors me!"

"What the heck are you on about?!" Rottkap said, stamping and bouncing, trying uselessly to reach up. She was a bit stretchy, but not remarkably enough. "Give it back! Urgh... can't reach. Karolina!"

"It's a matter of love, little cap!" the angel replied excitedly. "I've known of Chernobog for a long time. When Outer Hell dredged him from his earthern slumber, I saw him, and fell in love with my dark suitor! Now with this book, I'll surely have the attention from him I've always wanted. He can't ignore me now!"

"And don't bother calling the witch... I'm afraid she's busy with a shade of her old infamous serial killer self. I doubt she can even hear you. Well, ta ta! I'm going to do some reading!"

Rottkap grit her teeth and shook with anxiety. "Oh no! Karolina's gonna kill me! She can't go without that spell book! What do I do?! What do I do?!"

"Throw me. You can do that, right? I'm right here. Reach into the bushes. Throw me as hard as you can at her."