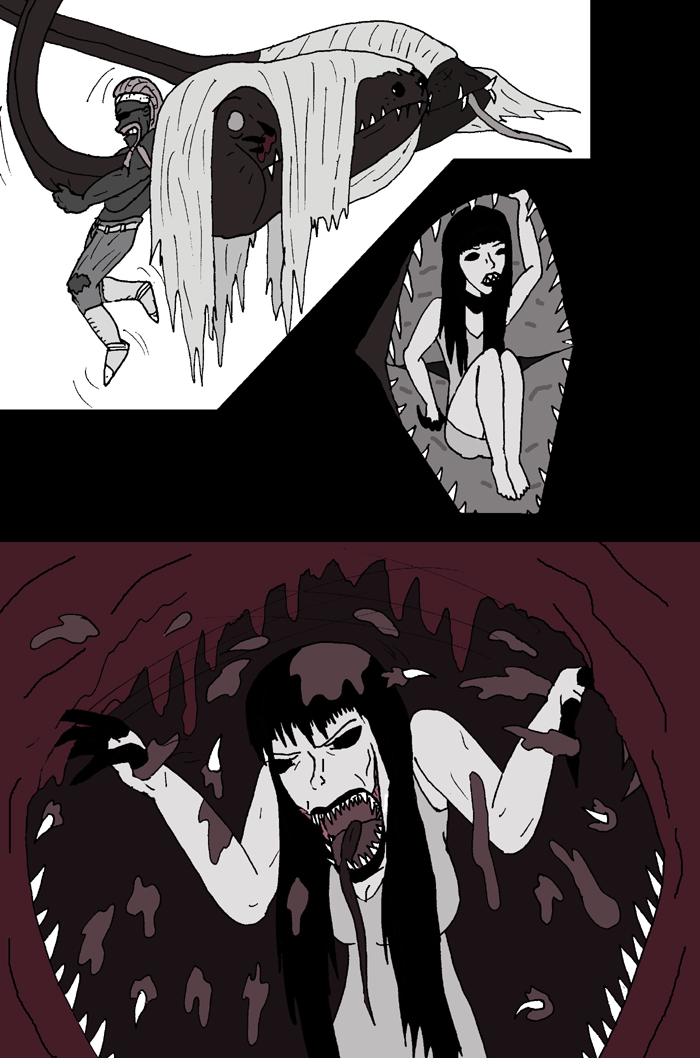 Back at the fight, it was going fairly well, all things considered. Tulsan maintained a tenacious grip on one of the three necks, preventing Siouxsie from being swallowed whole. Karolina blasted holes into the creature, finding it quite vulnerable to her 'geist repelling' beam, which seemed more like a burning laser than anything that would simply drive off such a contaminated monster. And Beltresz, probably in some need to blow off steam, beat the ever loving snot out of the other head, smashing it again and again to the ground with her spiked mace until it began to stall out from a concussion. For all the size and threat it seemed to have, the heads were slow on the recoil to draw themselves back up again. Beltresz could easily exploit such sluggishness with a mere side step as a trained fighter, while Karolina had enough sense to stay annoyingly out of reach, as the Karahydra clearly had it out for her.

However, during the fracas, Siouxsie was drawn into the third head's mouth, only protected by Tulsan's vice-like compression on the noodly neck. "Want to step it up over there?" he called out to his cousin. "Damn thing's literally eating the zombie."

Inside the mouth, Siouxsie sat quietly, a bit confused as she often was about most any topic. Possessed of only limited understanding, let alone any teaching, she did eventually understand how she made a foolish era in assuming the Karahydra's false face-snout was Karolina. It didn't make much sense in hindsight.

The interior of the mouth was wet and foul smelling like some stagnant bog, leaving her flanked on all sides of a tight oval-shaped chamber, surrounded by alligator-like teeth. Slow to take in her immediate situation, Tulsan's grip outside allowed her the moment she needed to grasp what was happening.

She had been tricked by a false Karolina. That was mainly as far as her rational capacity went for the time. She hadn't been fully aware that Karolina walked off briefly to conduct her ritual, as the zombie had been in a torpor of sorts when the monster arrived. Hence, she saw the thing's face and simply assumed. But it was clearly a mistake.

Sitting inside while her friends could heard muffled, fighting outside, made her feel something new. Indignant. She didn't like being made a fool. And these teeth around her... wait, it was familiar, wasn't it? The way they looked, curved, and jagged.

Oh, yes! It was brief, but while she was left alone at the Longtooth camp without her spider or witch friend, they began to inspect her. And she snapped at them! She was supposed to remain quiet. Maybe. But they didn't seem like nice people and her friends looked glum when they had to leave. And then they found out she wasn't alive like everyone else. They thought she was an... what was the word? Ah-bomin-nashun? It was a big word. But it sounded bad. So, they attacked her with their teeth and tore her apart when she couldn't fight back, tied to that stake!

And now, it was happening again. Right? She blinked. She had been doubled tricked! Probably!

Losing her cool, Siouxsie snarled like a wild animal, immediately growing hostile and agitated. This false Karolina was mean! And a Longtooth of some kind!

"NOT.... FRIEEEEEND!" she screamed, flipping out.

Suddenly exploding with rabid anger, her jaw unhinged like a snake, ripping her cheeks open, as she exposed her own crooked sharp teeth. Frenzied, she began to violently slash her nasty new black claws at everything around her. Mouth parts, flesh, teeth! She would cut up everything!

Rip and tear! Slice and gouge! Make blood and gore!

Outside, holding onto the base of the Karahydra's head, Tulsan noticed the creature suddenly freezing, looking trouble, and uneasy as Siouxsie's claws began to pierce the muscle and outer skin of the monster's face.

"What the heck is going on now?" he mumbled as the others began to gather on the final head.

Emerging gradually, ripping a hole in the creature's head, Siouxsie tore her way out like some blood soaked butterfly emerging from a cocoon, hissing and howling bloody murder. As Karolina approached, she shuddered a bit. It was the same sounding animal noises Siouxsie made long ago when she had been inadvertently starved in the Bailey family crypt.

Life leaving the Karahydra's remaining head, Karolina motioned for Beltresz to back away a bit and for Tulsan to let go. "Oh geez... let's... give her a little space." Not knowing fully what was going through the zombie's head, Karolina desperately hoped they wouldn't be attacked next, like the first time heard those sounds with Bali.