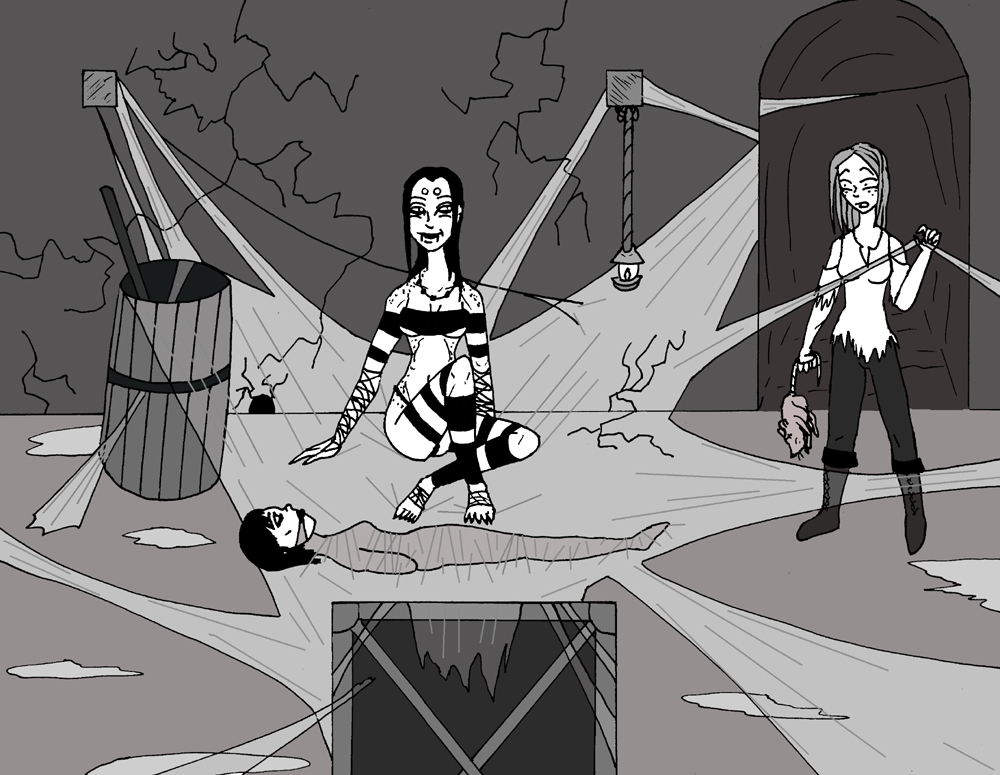 They took the zombie indoors and sequestered her stunned undead body in a basement. It was only used for storage in the past, but Karolina had no particular need of it these days. Her best shovels and tools were kept upstairs for ready access and protection, while she also possessed no particular abundance of anything else she wanted to keep around indoors. Bali, meanwhile, seemed to take well to the dank cracked concrete sub-chamber. "Cozy," she said, with no particular sarcasm. Karolina didn't understand the opinion, but it didn't seem important either. What was relevant was Bali's assurance that the zombie could be neutralized here and would be no threat upon waking. "Don't worry about it. Just find her some meat to eat and we'll go from there," Bali restated, winking confidently to Karolina.

The whole thing seemed odd. Despite raising the corpse, Karolina had no understanding of what a zombie could and could not do. If she was absent of life functions, how did striking her with a shovel knock her out? Did that also mean a zombie could sleep, dream, and experience other states of being beyond aggression? The witch sighed. It had been a complete mistake to fumble around with such a spell. Just one of many at this point, upon a growing list.

Along the way, Karolina changed out her pants and sandals, at least to rid herself of feeling wet from the rain. She thought it was funny, but being outside in the rain with wet clothes was far more pleasant than no longer being rained on. The way dry air felt on wet raggedy clothes was clingy and uncomfortable. Outside, it was more akin to being in a bath. And while the sandals couldn't saturate from being in the rain, she didn't want to wear them any further than necessary if the material was compromised by soaking. She couldn't sew or repair the clothing she had, unfortunately.

Soon, she checked some of the mouse traps in the building and found one plump rat laying in repose. They were common enough pests, prone to chewing on whatever they could find, be it wood beams, old socks, or food scraps. Karolina wasn't particularly skittish around vermin. In her line of work, she had seen various critters and scavengers wandering the town, especially after everyone died. She left them alone and she hoped they would do the same. Her mother didn't like such animals, but dad was a different story. To him, they were essentially just a fact of life and not worth the time to consider when there was work to be done. And there always was. Karolina liked that practical attitude of his.

Venturing back down to the basement, Karolina found a strange bit of material running across the doorway. It looked like a loose gossamer or translucent fabric. Ducking it, she entered the room and quickly found a great deal more of the stuff all over the place. Getting a better eyeful, she recognized them to be cobwebs. Lots of them. Karolina paused, rather surprised.

In particular, there was one central mass of the webbing in the room, anchored by a barrel, a crate, and some nearby walls. Upon that silk sat Bali-la, who looked very pleased with herself. Next to her, laying on her back within the webbing, rested a well bound Siouxsie Q, completely wrapped up in the gossamers like some strung up fly. Only her head was left uncovered. The zombie twitched on occasion, but simply stared at the ceiling otherwise, oblivious to her surroundings.

"What is all of this??" Karolina exclaimed, plucking one large anchoring strand. It was soft, stretchy, and very strong. It reminded her of her mother's old nylons, but vastly more durable. "Just... how? I was only gone ten minutes!"

Bali continued wearing a content expression and pose, as she sat there in the web that held both her and the cocooned zombie girl aloft. "First off, it's exactly what you think it is. Secondly, well... let's say it comes naturally to me."

The witch had no almost words. Xibalbans could make spider webs? Or maybe just this one? She had no idea what Bali-la was truly about, but things were beginning to paint a picture. At least, the fangs made a lot more sense, she reflected. "You're... some kind of spider person? Right?"

Chuckling, Bali smiled more and nodded humbly. "Essentially. I'm part of a clan that has, shall we say, similar attributes. Don't worry, I didn't make them sticky. I have some talent in deciding how to produce my silk."

"Uhh... erm, why is it scattered in random places?" asked the witch, noting some random haphazard strands stretched out in seemingly pointless spots. She was trying her best to quietly cope with this overall new discovery.

The Xibalban shrugged sheepishly. "Hrm. That one is harder to explain. I suppose I did that when I was thinking about how to set this up. Chalk it up to compulsion, I guess. It's a cozy little basement, so I decided to make myself more comfortable. Call it ambiance, maybe?" She chuckled again, this time with a hint of nervousness. She wasn't sure how to explain something so minor, yet so foreign to the young woman. But she had to know at some point, Bali reasoned. Awkwardness was natural in learning.

Karolina rubbed her brow, trying to take it all in. And with Bali speaking about it so casually did not help much. It was just so weird to see. "I have so many questions... damn... I don't know where to begin."

"Well, let's table that for now," suggested the spider woman. "I see you have a nice rat there. Why don't we try offering it to Siouxsie here and see if she calms down."

Numbly, Karolina reached to Bali as best she could, extremely intent on not touching the webs. "S-sure... here you go." It came on suddenly, but she found herself a lot less concerned about the undead woman she raised and was more anxious about the Xibalban guest she had offered a night's stay. It all seemed like a very bad idea now.