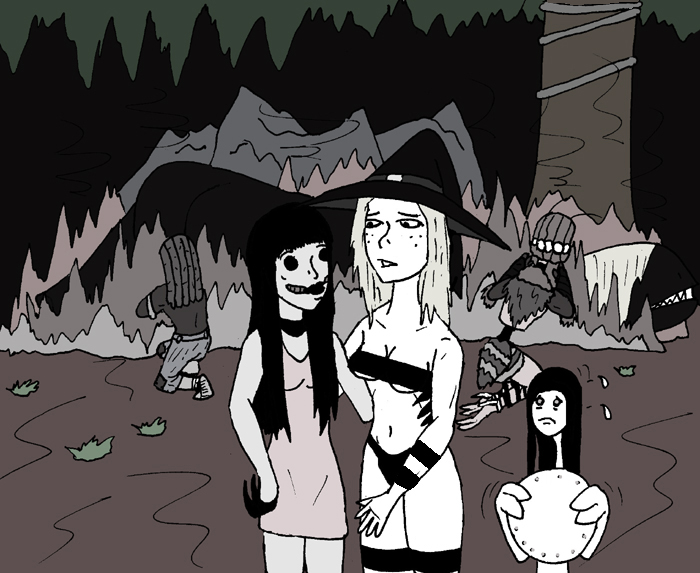 With the monster finally subdued, Karolina kept an eye on Siouxsie, watching the zombie warily. Tearing one's way out of a monster's cheek could not have been an easy experience. The zombie was hunched on the ground, snarling, and shaking saliva off her body. She eyed the Karahydra with her otherwise empty sockets, checking it for movement repeatedly. But at last, the thing was dead. Karolina estimated she probably shot the monstrosity with her repelling magic over a dozen times. And while it was a little clumsy after the scare of it's initial appearance, those bulbous heads took a lot of abuse between the four of them. No single one of them could have really fought it, but as a group, they handled it fairly well.

In moments, Siouxsie eased up. Her brow untensed and she slowly stood up to that hunched stance of hers. Unfortunately, her own cheeks were still torn, exposing the muscle under the skin, giving her an accidental rictus grin. Karolina was no stranger to anatomy, having grown up in the family mortician and burial business, but she couldn't help but flinch a bit. It looked painful, like a paper cut for someone's face.

As for Siouxsie, it was as though the zombie had never been angry. Or eaten by a monster. She seemed to act as if nothing had even happened, given the neutrality of her expression. Looking up to Karolina, she smiled, further emphasizing her self inflicted wounds. "Real friend. You are... real Karolina," she said, trying to work out her words.

"Y-yes, of course." The shovel witch couldn't help but feel badly for Siouxsie. Part of it was that old guilt she had over her treatment at the Bailey mausoleum. The other half was all now. "Um... how are you feeling? Did it hurt you?"

"Okay, so... you know it wasn't me now. I'm glad you're all right. But you should be careful. You could have gotten seriously hurt. I... don't know if I can do much for you if something goes wrong."

The zombie seemed a bit ashamed. "Siouxsie tricked. Am sorry, Karolina. Was confused."

"I guess we'll call this a win, considering no one got hurt," sighed the witch, taking something from the situation. "What about your face? Looks torn open...?"

"Huh... nothing? Alright. Maybe it'll heal somehow? I'm still less than familiar with this whole, uh, process we did." She noted the cousins, in the meantime, had set a bonfire for the Karahydra. It was probably a good idea. Although Siouxsie was probably hungry, maybe it wasn't the best to eat a contaminated geist monster with her face on it, the shovel witch thought. They would have to find something in the morning, maybe.

Thinking everything was generally fine, she only then noticed Rottkap standing nearby, holding her cap in her hands apologetically and looking very nervous.

"About that..." mewled the little mushroom girl, afraid of Karolina's response. "See, when you were fighting that thing... there was, um, a little... incident."

It was then that the shovel witch realized her spell book was also nowhere in sight.