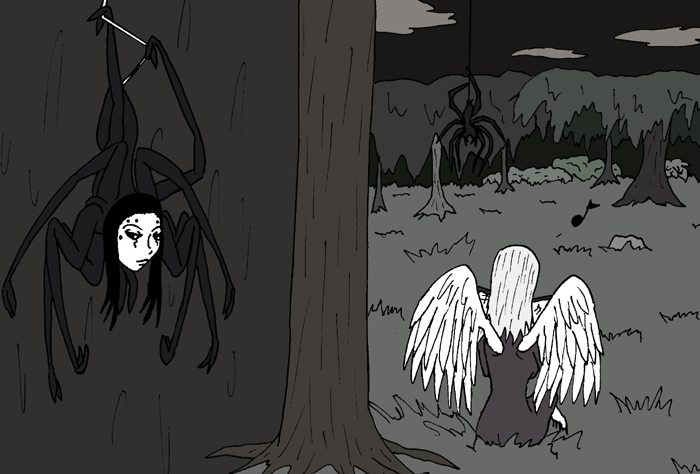 As Rottkap explained the situation, her voice grew wobbly, not helped by the fact that Beltresz and Tulsan had finished their task and joined to listen. Each had their own reaction.

Karolina was dumbstruck and trying to deal with the very idea that her familiar and spell book were gone. Tulsan seemed puzzled, repeating to himself the description of the thief. Beltresz looked positively disappointed in the little mushroom girl, but said nothing. Siouxsie, to little surprise, had no particular response, probably not fully grasping the problem or she hadn't been listening much.

"No, not really. Not that I've ever heard," Karolina said, sounding a bit concerned with due reason. "It's kind of a burden at times, but I need to keep it around. Tom? Any ideas?"

A squeaky voice emerged from her hair. She just KNEW he was back there whenever he was out of sight. "It's not unheard of for such a spell to exist... you can summon your shovel back, yes? You can't do that with your book? Otherwise, I've got nothing."

"No, I can't. That spell is incredibly simple, there's nothing I missed about it. Craaaap... if that thing goes missing, I can't potentially study anything new from my invocation. I'll be potentially locked with what I've got." She knew there was a time where that fact wouldn't have mattered, but it was a confirmation that she was trying to be more studious these days.

"Well, this is a mess," Beltresz sighed, side eyeing a very ashamed Rottkap. "Cousin, can you track something like this angel? You're the hunter."

Tulsan folded his arms and lowered his gaze. "It would be luck more than anything. Without signs of her passage... fallen feathers, broken branches, and the like... tracking is an old school art. I can't magically find anything that stays in the air, nor would I know where to look."

"Oh!" peeped Tom. "Metis was with the book, right? Not all hope is lost. Karolina, commune with Metis! She may have an idea if she's within range to hear you."

"R-right! Okay, lemme concentrate..." the witch announced, grasping onto whatever chance she had. She closed her eyes and began to think of the spidery familiar. The whole concept was extremely new to her.

After a few pregnant moments, she felt a presence reach back, as if someone had tossed her a ball from the darkness.

*Master. I did not wish to disturb you sooner. Your fight went well?*

*Oh good! Yes, we're all okay. What about you? Are you okay?* asked the shovel witch.

*There is no need to panic yet. With Rottkap's assistance, I've hitched a ride of sorts with this thief. She has your book. If you're careful, you may be able to retrieve it. And perhaps this fool of an angel.*

She continued. *If you continue to focus on me, you should be able to feel where my presence is. I'm situated in a tree above her. The angel sits in a small clearing facing the woods from where you should be within. She's quite fixated on your book, although I know not why... it should be unreadable to her and she has an eye mask of some sort on. You and perhaps one other can circle around to my position while she's studying the tome. Or... perhaps those javelins will do the job, if you don't care about her life. But don't wait long. I doubt she'll stay for too long.*

So, Karolina told her team the situation. Looking them over, she settled on Tulsan. He was a hunter and he made the javelins in the first place. He was undoubtedly the best suited.

"Makes sense to me," he said, gathering up his remaining pointed sticks he scavenged back from the Karahydra. "Bring her in alive?"

"Yes. I want to know why this happened and if we were targeted. Not everyday you get robbed by an angel."

"Alright, lead the way. I'll handle it once we get to this clearing," he grunted, not questioning his skills.

"Beltresz, can you hold the fort down?" the witch asked, after nodding to Tulsan.

As the two of them left, Beltresz smiled discreetly. Karolina had not only fought the monster bravely with them, but she was delegating and taking charge. It's all she could ask for as an Enforcer. Rottkap, meanwhile, returning to the bonfire of the camp, not wishing to meet the Harrier's withering gaze anymore. She already knew she screwed up enough, even if Karolina didn't come down on her for it.

No update next week, I'll be out of town. Things should be fairly regular after that, at least until the end of June.