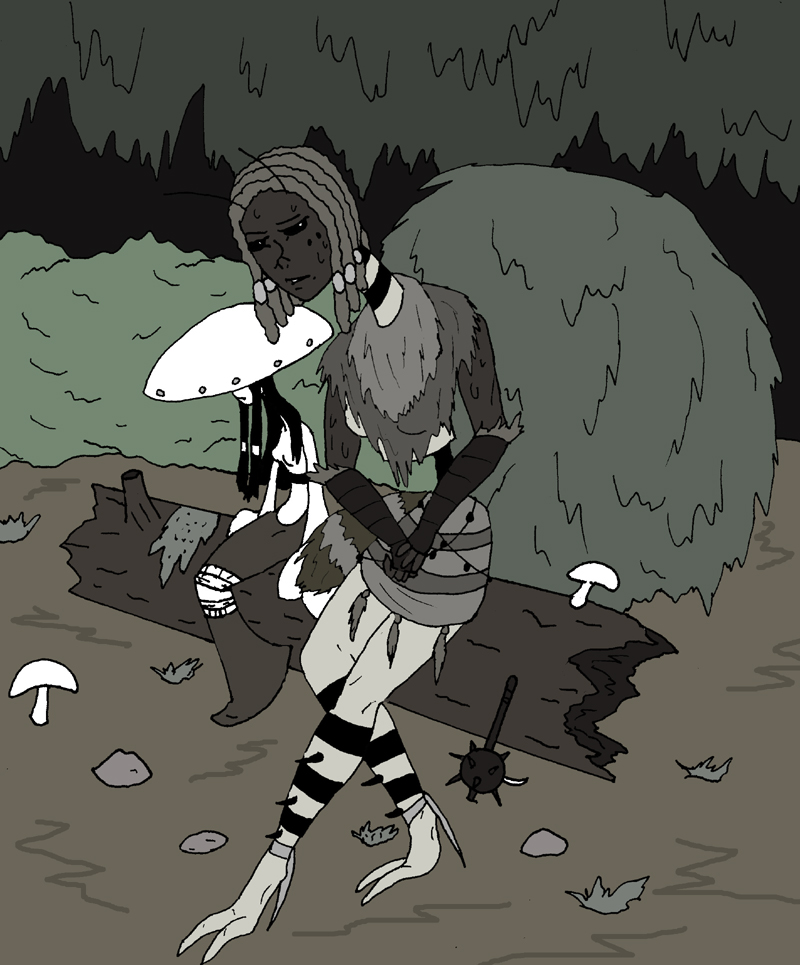 Returning to the camp, Karolina found her friends sitting at ease. With the exception of the zombie, to whom the witch gifted her the angel's dressy gown, the others had a dejected expression. Gleefully, Siouxsie accepted the gift, not questioning the origin as Tulsan soon arrived behind Karolina. He glanced at her, but she seemed back to normal now, or whatever constituted that. Maybe it was simply the poor lighting out there, but the way she had talked still seemed more fierce than he assumed of her. For the time, he decided to keep it to himself.

Gathering at a fallen tree upon where Rottkap and Beltresz sat, Karolina and Tulsan could both tell something was wrong. The mushroom girl seemed depressed about something, while Beltresz was breathing heavily.

"Did... something happen?" Karolina asked, feeling a sense of worry. "Beltresz, you didn't get infected did you??"

The velvet ant shook her head, sitting with a hunched pose. She smiled modestly, seeming tired. "No, no... nothing like that. That thing never made real contact with me. No, this is something else."

Tulsan stepped closer. "Are you alright?" His voice was tinged with concern.

"What's wrong?" Karolina was most curious. They had been gone for all of fifteen to twenty minutes, tops. What could have possibly happened in all that time, she wondered?

"So, it doesn't come up much..." Beltresz said, sounding a little strained. "But I'm... not good at handling air like this. The humidity and moisture is doing a number on my lungs. I've been keeping it together until now, since we haven't done much more than walk around. But that fight knocked the wind out of me. It's like having a wet version of an asthma attack that doesn't stop." She buckled forward and coughed, before slowly sitting up again. "I didn't really think of it when we came out here. But I'm not cut out to handle swamps and bogs like this. I think it might have to do with my clan's velvet ant totem. It's not something I dealt with before I apothesized."

Karolina gasped. "This is terrible... is there something we can do for you? Maybe you can sit by the fire for drier air?"

Beltresz was chagrined. "That would work, but only to a point. The problem isn't necessarily now... it's going forward. The swamp's air is only going to become more saturated. I'm not going to be useful most of the time. I wouldn't even be able to run well, if we needed to."

"What are you saying?"

"Karolina... you know that you and I have not seen eye to eye. And I'm sure you felt the tension between us. It was not my idea to take your position as Alpha, ever. I just wanted you to be a strong leader. That's what an Enforcer does. And I was worried that you didn't have what it took."

Continuing, Beltresz took a moment to gain air in her lungs, wincing. "I know now that I don't have to worry. I saw how you faced that monster. And that you went to confront the thief... it looks like you were successful. Karolina, going forward, even if I was to follow you, I would become a liability like this. As an Enforcer, I must approach all things from a position of strength and capability. I don't have that now. Not here. It's not easy for me to admit I would be, well, less than useful. My inability to do my caste's role would endanger the rest of you, too."

"As of tomorrow, Karolina... I will be departing from service in your name. At least, for now."

Karolina seemed stunned. It felt like one mishap beyond another was happening. Solve one issue, another one would pop up. And to hear Beltresz basically tell her that she would be a liability to the witch, was not something she ever expected to hear.

It was true, they were subtly butting heads and Beltresz had sized her up repeatedly. She was a bit brusque and unfriendly, but she had also been capable and professional. The Karahydra fight alone would have been much more dangerous without the Harrier throttling the monster.

All said? Karolina didn't really want her to depart either.

"You're leaving? Are you sure? You don't want to follow us, even in a non-combat role?"

"The weak don't survive forever in Xibalba, Karolina," said the Harrier. "As I said, my inability to exert myself for long would be risky for us. I also don't know if I would suffocate from something like this, but that's a possibility. Drowning in open air is no way for a warrior to meet her fate. Some things all the resolve in the world can't bring you back from."

Karolina took a moment to process things. This was a set back, but she understood. It was selfish to ask her to stay under such conditions. "I'm sorry to hear it, but I understand. But, where will you go? Back to Adelaide with the Harriers?"

"Well, I'll catch my breath by the fire tonight and walk back to forest and prairies. I can follow our path back out, to say nothing of blood sensing. I'm going to go to Brand's camp, I suppose. The air is dry there. I'll probably spend some time with my uncle; Tulsan's father Jarrah. Guess I'll figure things out from there. I have no intention of going back to the Harriers. I didn't belong and they might take this departure as cowardice."

"You're definitely not a coward," comforted Karolina. "I hope we meet again, Bel."

The velvet ant smiled. "Maybe we will. I bet at that point, you'll be so much stronger too. Heh. You just better take care of my cousin, eh?" she said, adding a playful warning.

"And you, Tulsan!" she pointed at him. He raised a brow. "Mister stand-offish... make sure she gets to Uluru! The family's honor is at stake, you know."

He nodded with a wry grin, grunting. He had little he wanted to say in public, but he would talk to her later before she would leave. "You have my hand on it. I'll get her there."

The witch then looked to Rottkap. "Are you okay, hon?"

Rottkap fidgeted her bulky hands. "While you were gone, and Beltresz was figuring out what happened and talking and all... well, I got the idea maybe I should go back too. I'm the absolute weakest person here, pretty sure. And it was my fault the book got stolen. I feel like such a damn fool."

Karolina crouched down and patted Rottkap on the shoulder. "She snuck up on you, but it could've happened to anyone. It's fine. We got it back and you weren't hurt. Its alright."

Rottkap sighed, frustrated with herself. "It's not alright, Kara! Even if you forgive me, it doesn't change the fact that I'm beyond useless! I can't fight, I'm not fast, I don't have any neat powers... my main contribution around here is holding your book for you and stuff. I'm an Envoy... with no way to help out meaningfully. Unless my Queen calls on me, which won't necessarily have anything to do with what you need to do, I'm just going to screw up."

"Please don't be so hard on yourself, Rottie," said Karolina. "You're my friend and a a good one. It doesn't matter to me if you're not here to fight. I like your company. You know that, right?"

The mushroom sniffed sadly, frowning with little tears in her tiny eyes. "I know. And I love you for that! I've never had a friend. Ever. But I want to be more than just the pack's walking talking joke. And yet, I'm not designed for it. I couldn't even get to Brand's camp safely without your help. It's... hard for me to realize how pathetic I am."

It dawned on Karolina where this was going. "You're going to leave too?"

Rottkap hopped to a stance. "Yes. Maybe. I don't know! I haven't decided. Beltresz would be able to protect me going back and she's willing to take me there. I just... I just need to think. I don't want to leave, but I don't see any way I can go forward. I want to be useful. I have to be. Somehow..." She shook her head. "I'm sorry. I just need to be alone right now. I'll figure this out by tomorrow morning." And with that, Rottkap hopped away to the other side of the still burning fire, ashamed of herself thoroughly.

"Okay..." Karolina mewed, sad to think that her little friend was considering leaving too. She glanced to Beltresz. "You didn't... push her to this, did you?"

Beltresz frowned. "While I didn't approve of her losing the book, no. I did not suggest she leave or mock her in any way. This is something that she alone was dealing with since the theft, from what I could tell."

"Hmm. Alright. Sorry for the accusation," Karolina sighed, feeling exhausted by this point.

"Not a problem. It was a logical suspicion to have," said the Harrier.

"I'll take watch tonight with Beltresz," announced Tulsan, trying to side step the melodrama. "Karolina, why don't you get some sleep? You look tired. We'll deal with whatever there is going on, in the morning."

"Yeah? Okay. Thank you, Tulsan. This has been a lot. I don't know how well I'm sleep, but I guess I should try. Goodnight everyone."