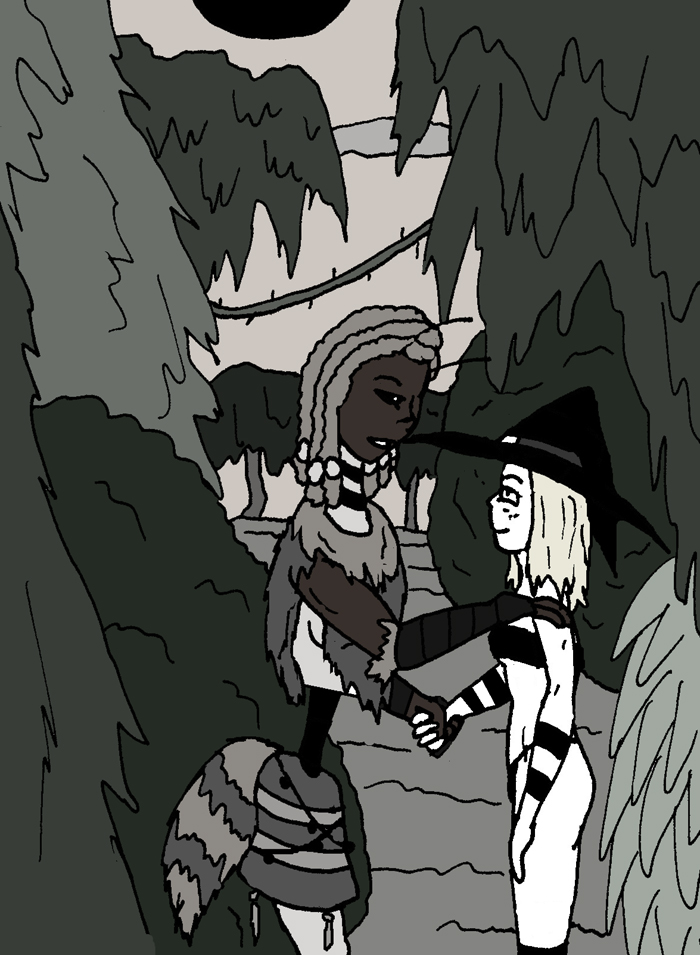 It was as humid as ever under the next day's orange sky. Karolina was acclimating to the swampy air fairly well, although if she had her old clothes on, that would have been a different story. Lifting herself out of a patch of grass, where she had used her spell book like a pillow, she looked around, rubbing her eyes. Siouxsie was sleeping like, well, the dead. Tulsan was curled against a tree, probably getting whatever shut eye he had been allowed. Tom Thumb was trying to get Metis to play a game of hopscotch. She didn't seem to be going for it, only sharing funny looks at him. Karolina suspected he was having more fun just trying to get her to agree to the activity, than actually expecting her to play.

A nearby cough told of Beltresz's location. It seemed it was time, so the witch went to meet her.

The Harrier sat on a large rock towards the way they originally came. As Karolina approached, Bel stood, stifling another rough cough. "Sorry. Did I wake you?"

The stood quietly for a moment.

"So, I guess this is it, huh?" Karolina asked, resigned to accept Beltresz's wishes.

Shortly, Beltresz shook her hand and placed another on Karolina's shoulder. "For now, at least. I can't claim to know what the future holds. But... I want to apologize again, if I've already done so."

"For busting your chops in my own passive aggressive way, of course," chuckled the Harrier. "I misread you the whole time. Your legend, your demeanor when we first met... I didn't think you were fit to lead anyone and that you would shrink from danger. But you didn't."

"Thanks," the witch spoke. "Your description wasn't entirely wrong about me, though. I've just been trying to, you know, change myself. I have a lot of clean up to do out there. I've had some good teachers and people to prod me in the right direction. Xibalba toughens a person up, I suppose. And I have a lot to learn."

The Harrier shook her head. "She's around here somewhere. Um... she's going to stay with you. She's someone else who's looking to change. I've already spoken and said goodbyes with her. You're fortunate. She's definitely your friend."

Beltresz wore a distant gaze. "Don't take this wrong, but... we were pack mates. I don't know how to make friends, Karolina. I'm not suited for it. But Like I said, who knows what the future holds?" She patted Karolina on the shoulder. "I have a long walk back to the pepper grass camp. Maybe I'll hear about your adventure through Tom and Brand? Well, you take care of yourself. And everyone else, too. Especially my tough guy cousin. Heh."

"Alright. Thank you for your help. Be safe and I hope to see you again, Beltresz!" Karolina waved as the Harrier turned and began to long walk back to Brand's.

But before she went out of sight, she stopped and turned for a moment, looking back at the witch.

Karolina took a moment and nodded with a wry smile. "Take care, Bindi."

The witch blinked. Although that was more her old moniker, she remembered when Bali-la called her that as a sign of friendship and it had different meaning to her going forward. It was her natural nickname. She just didn't expect the Harrier to say it. "Maybe you're better at making friends than you think, Bindi," the witch said to herself. "Here's to the future, eh?"

Feeling serene, she took a moment to observe the night's camp, seeing everyone still asleep. There was no reason to push them onward yet, so she decided to let them slumber more after such a rough night. As for now, it was time to find Rottkap. Karolina knew she couldn't have gone far.