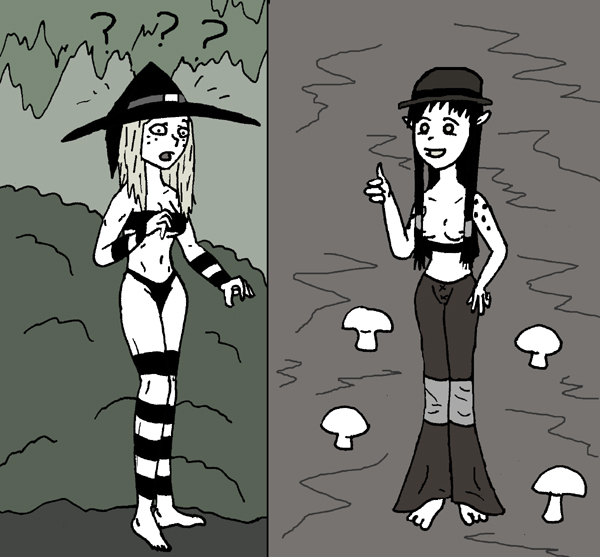 Past the blackened charred carcass of the Karahydra, now barely more than a stain of sooty ash in the mud, Karolina found the circular base prints that consisted of Rottkap's plunger-like leg stump, alongside some other footsteps. They led a short distance into the greenery just beyond.

"Rottkap? Are you there?" the witch called.

Karolina walked into the brush to find her little friend. "You sound chipper- aaaah?! What the heck?"

In a small ring of mushrooms, stood a semblance of her mushroom fairy friend. Except now, she was a small humanoid wearing brown pants and a derby hat, instead of a skirt and a mushroom cap. Additionally, she had actual feet and legs to go with the former, as well as a slightly more humanoid face with elven ears. The same black band around her waist indicated it was her. Somehow.

"What do you think? Does it suit me?" asked a now humanoid Rottkap.

Karolina was flabbergasted, not aware of what even happened. "I... uh, didn't know you could shape shift."

"I really couldn't, not that I ever practiced the idea," said the little fairy, still barely around four feet tall. "Actually, I made an arrangement with the Queen of Mushrooms last night and got this as a parting package." Rottkap posed triumphantly in a self bemused way.

"I basically asked for a release of service. I wanted to continue with you on your journey, but I didn't like how useless my form was. It was either this or I turned back with Beltresz. Anyway, Zanza-Anzulu and I were on good terms so she was very kind about it. I'm not her envoy anymore; just a regular every day fairy now! But look! I have a nose and toes now! How cool! I've been practicing walking all morning!"

Karolina just tilted her head. It was so odd to see the little mushroom like this. "Yeah, but... Y-you just gave it all up? You could do that?"

Rottkap shrugged, smiling. "It was worth a try. Fairies are like humans, in a way. We can 'become' a melding of something else in this world. And that's usually how it happens. But we're basically just blank intangible spirits until we feel that call. Zanza conscripted me from spiritual ether, so I became a physical being. But she's not a totem like the Xibalban clans represent- it was more of a contract of service and a sense of purpose. As such, I figured why not try to leave it? She didn't really need me out here or at Brand's."

"Geez... there is so much about this world I don't get," boggled Karolina. "But okay, why did you do this?"

Rottkap got a little more serious and crossed her arms. "Because I never had a friend before, let alone someone like you. You never looked down on me or treated me different as an Envoy. You were just you. And you even trusted me to help you with your magic stuff."

Sighing, she continued. "I didn't want to go back to just being an on call Envoy who can't do anything on her own. I also didn't want to keep being a liability to you and everyone else. If I followed you further as I was, who knows what would have happened to me or to the rest of you because I couldn't do something. I feel like I have more of a sporting chance like this. I can grow as a person like this. The mushroom body was never designed for fighting- that's why all my kind were basically just diplomats under someone else's reputation. When the monster attacked last night and that angel stole your book, I couldn't do anything in either case. Too slow, too weak. Now, I've got another shot. I can change. I can be useful. It's a second chance for me, Karolina."

Listening, Karolina took her motivation to heart. And she understood all too well about needing a second chance to do something to change herself. Everything that happened in recent time was centered around that for the shovel witch.

Coming to terms with the facts, Karolina grew a smile and nodded, returning a thumb's up to the plucky fairy. "Alright. If you feel this is what you needed to do, I'll take it at face value and respect it entirely. This is something you would know best. And I think it's really touching you consider me such a friend, that you'd even consider what I'm doing as something to base your decision around. Thank you. That means a lot. So, do you have a new name to go with this reinvention or...?"

The little fairy bowed in honor. "No, no. I'm still me. Just Rottkap, former mushroom ambassador, and fairy extraordinaire. I like my name perfectly fine! But please... call me Rottie. All my friends do!" she said with a playful wink, well aware she was talking to the only one she had.

"You got it," agreed the witch. "Then, maybe you'll call me Kara? I feel more comfortable with someone when I can claim that for my own."

"You got it, Kara! This is gonna be a great road trip. Kara and Rottie, kicking butt to Uluru and back!"

"Heh. We'll see! Still working on not getting mine kicked," chuckled the witch. "Well, we should get Tulsan and Siouxsie up. We should find something to eat and there's a long road ahead of us. Can't do that without some lunch, right?"

Rottkap skipped over to join the witch. Such a movement seemed like a compromise between human-like walking and her old bouncing form of locomotion. "Yeaaaah! Lunch rules!"

Karolina couldn't help but smirk at how utterly excitable the fairy was. It would be a good contrast to what would surely be rougher days ahead. But for now, she couldn't help but think how fortunate she was to have a friend like this. And that she would try to treat her better than she did with Bali-la. Be it spider fairy or a (now former) mushroom fairy; she couldn't say if there was just something about them she particularly liked or if they saw something in her. Maybe it was mere coincidence. But she was glad to know both and feel their confidence.