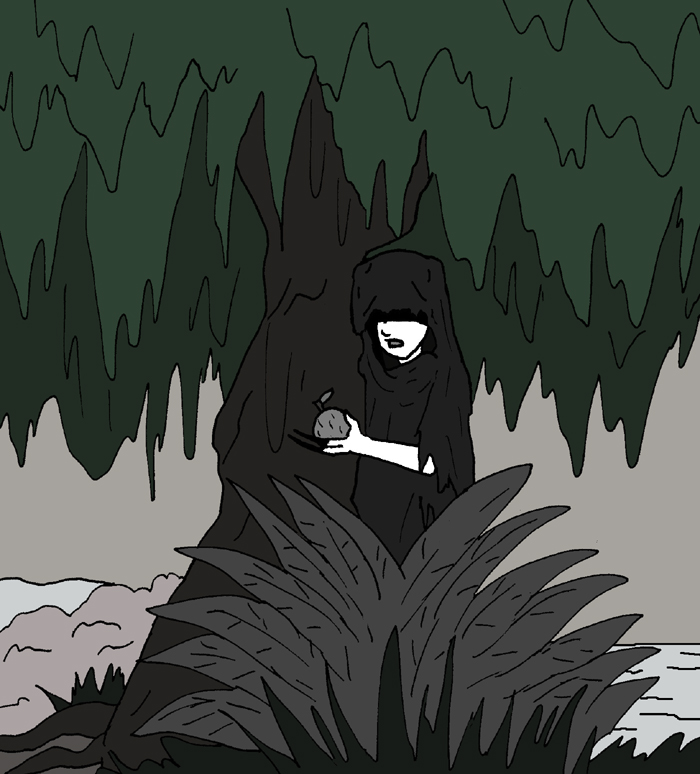 As the group approached, the figure receded under the shadow of a swamp tree, taking partial cover behind it.

Tulsan took this as a bad sign. "Ah. See? Why call us over if they're just going to back off and lead us on?"

Karolina thought it odd too. They were close enough for her tastes, given the sudden reposition. "Hey," she called out. "What gives? I thought you wanted to talk. Why are you ducking behind the tree?"

The figure held their ground, dressed in a slate toned hooded shawl that obscured what the shadows and foliage did not. "Because there are several of you. And your associate carries a spear in his hand. I'm not so foolish as to stand on open ground when someone bears a throwing weapon." It was a woman's voice, perhaps someone a little older than Karolina.

The shovel witch glanced at Tulsan's javelins. Fair. She had a point. Karolina motioned for him to plant them down. He grunted but relented without making a big fuss, still visibly suspicious of the stranger.

"Is that better?" Karolina asked. "Look, why don't we just talk from here then?"

The hooded woman nodded, remaining behind cover but backing off no further. "That suits me."

"So... did you want to talk about something?" questioned the witch. She couldn't get a feel for who this person was. Human? Xibalban? Something else?

"Actually, yes," replied the stranger. "I wanted to talk with you in particular, Karolina."

The witch stiffened and stared warily. "How do you know my name?"

"I've been traveling in your shadow for a while now. I saw you at trading post of the man named Brand."

Tensing, Karolina's mind raced. She could not recall this person at all. She felt uneasy. And why was this person following them? Or was it just her? And to not be detected after all this time? How much did this person know or eavesdrop upon?

Meanwhile, tucked in the back of Karolina's hair, Tom Thumb watched with great interest. Mentally reaching out to his master, he began to send a message.

After a moment, he felt contact with his bag headed lord, as Brand began to actively watch and listen through his familiar. *It is, indeed.* His tone sounded particularly intrigued. Brand had been aware of this person at his camp, but she said nothing and associated with no one in particular. But the day Karolina stumbled into his camp, that pale stranger in the hooded shawl seemed to react, watching their interaction discreetly. He never learned her name or if she wanted anything. She simply blended into the myriad of visitors at his camp and remained mute the entire time. And once the amateur witch left, so did his silent visitor.

What did she know about Karolina that made her react? Was there something of relevance about Karolina that stood out? He looked upon the witch as a potential asset to be curated for a possible later advantage through Tom. After all, she blew up an entire town. That was no small deed... But what this stranger knew, he could only guess.

*Continue to observe, Tom. Your associate with Karolina is paying off handsomely, I dare say.*

"Who ARE you?" Karolina demanded. "And why have you been following us?"

"Hold on... I hear it in your voice, but I'm not your enemy," said the woman. "If I wanted to do something threatening, I would have done it already. It is true, I followed you at a distance. I've been trying to discern who YOU are. I know your reputation as the one who destroyed Adelaide... would you willingly draw closer to someone who could do such a feat? And thinking to the times when you were visibly upset or traveling in the company of the Harrier... it did not allow me many solid opportunities to speak with you. I wanted a more discreet moment, I admit, but I did not find it once I felt you were not a risk to approach. My hand has been forced now somewhat- the terrain ahead is not well suited to stealth or being on one's self."

"You're evading my questions..." said Karolina, still no less wary.

"I'm building to it," the figure responded, never losing composure. "I have come to offer you my services in exchange for accompanying you to your destination. You are heading to Uluru, are you not? The Navel of the World?"

Karolina watched on cautiously. This person seemed to know a lot so far. Begrudgingly, the witch nodded. "What is your interest in that place?"

"I am on a personal journey. One of self discovery, really. I don't know exactly what lays at Uluru, but the trek is not one I can make alone, and few even have any idea where it is. But I must go there in order to understand certain questions I've had. I have been in communion with the spirits and they brought me to you. Somehow, they knew where you would eventually go and that you were integral to the journey. Beyond this, I know nothing of your trip."

Taking a moment to think, Karolina whispered to Tom. "Hey... do you know if she was at the camp?"

"I believe she was, actually..." said Tom, not getting into whatever details Brand knew. "She was there for several days before you arrived, I think."

Tulsan looked at the figure appraisingly. "The spirits told you all of this?" Tulsan asked, raising a brow.

"Yes. Does that strike you as strange?" the woman asked, inquisitively. "It is not unusual for my kind to have communion with the invisible things of the world."

Tulsan stared for a moment. "Xibalban..." he muttered to Karolina. The term was once much uglier to him, at least before he watched Bali-la leave the world, and his cousin, not withstanding. Now, he was still naturally suspicious, but more tempered. His thumb traced a slow line over the black bead necklace he was given. He wondered how significant he was to what was going on.

"Well... why should we trust you?" Karolina asked. "You have a good story, I suppose. But I don't know you whatsoever."

"Everyone who calls someone else an ally, must first meet as strangers at some point. But... ah, that's right. I was told you might be dubious of me and that I should bring you a gift. I do not know the relevance of it, but I was led to believe you would understand the specific significance of it."

From her shawl, the woman produced a single apple and presented it to Karolina.

The group gazed upon the piece of fruit. Her companions had no idea what to make of it. And at first, Karolina was no less confused. An apple? When had an apple been meaningful?

It took a moment, but Karolina began to connect the dots. It was something only she would've understood.

Karolina clasped her hands over her mouth and shook, tears welling in her eyes. "The spirits told you to give me this?"

"At first, no. Only later did I hear a voice recommending it. It was different from the others I heard. Tell me... what does it mean?"

Rottkap patted her friend on the back, seeing the witch stifle a moment of abrupt sadness. "Are you okay, Kara? What's wrong?"

"Someone offered me an apple once..." she said demurely, thinking to the past.