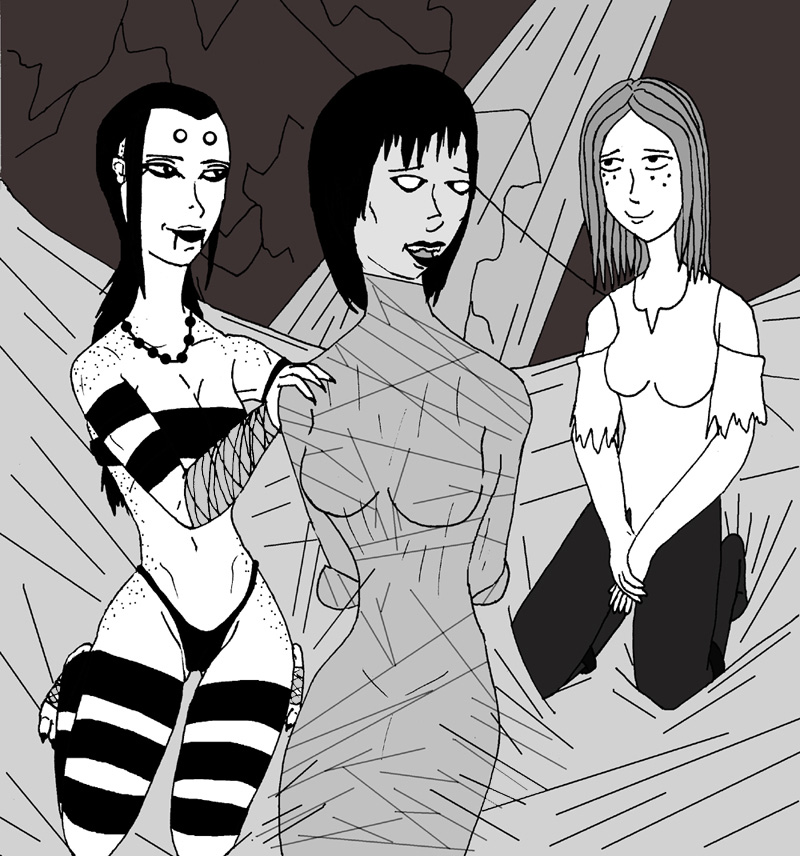 Karolina watched, wincing a bit. It was one thing to hold a dead rat by the tail. It was another to watch Siouxsie slowly pop back to a semblance of awareness and practically inhale the poor thing, as Bali dangled the vermin over her head. The zombie woman did indeed chew the rat, but the whole process was more akin to watching a snake choke down a smaller animal. After all, it wasn't as though Siouxsie could use her hands.

Bali seemed unfazed, as she kneeled next to the ghoul like some caretaker nurse. It was probably not outside of her wheelhouse to watch such a thing, Karolina assumed. The Xibalban was definitely more worldly and experienced than the shovel witch. Karolina wasn't truly ashamed, as she well knew she was ignorant of the world beyond the borders of town. If anything, she felt a bit envious. Bali-la was so much more confident than her and there were signs that she was insightful. Still, Karolina's opinion of her seemed to change from moment to moment. Bali was just so foreign to all that she knew.

As minutes passed, Siouxsie seemed to look about herself, as if awakening from a stupor. Her eyes blinked, instead of staring emptily. It appeared the feeding worked, just like Bali-la said. Intrigued, Karolina inched closer to observe the bound guest.

"You know, you can come onto the webbing here," Bali said, noticing Karolina with a soft smile. "Like I said, it's not sticky. And it will support you, don't worry. I can see you want a closer look. C'mon."

Learning that Bali could spin webs in short order admittedly made her seem a bit dangerous, Karolina thought. But it was unlikely that the Xibalban would do anything right now. Nothing suggested Bali was really waiting to attack Karolina, and she knew it. It was simply the very idea of climbing into a human bearing spider's web willingly, was just asking for trouble. Karolina sighed. This was quite a day.

Cautiously, the shovel witch climbed aboard and found the silk to be soft, bouncy, and quite strong. Walking on it probably wasn't realistic, but moving along on her knees seemed to work quite well. And true to Bali's word, the web easily supported the additional visitor that was the shovel witch. Taking some heart, Karolina scrambled closer.

By now, Bali allowed the wrapped up zombie woman to sit up, supporting her from behind. Siouxsie occasionally murmured quiet gurgles and noises, as if remembering how to move her jaw for something other than moans and snarls. Her expression had changed completely. The feralness was gone, as well as the maddened stare. In fact, she looked rather doe-eyed, her face softened into a visage of child-like curiosity. "Ahhh..." she breathed out, observing the room and her guests.

Karolina brightened. This was closer to how she first saw the zombie. So perhaps the feeding issue was just as Bali said. It seemed criminal now, as Karolina reflected on it, to leave the poor thing starving eternally in a mausoleum. But as she was a dead person, Karolina had not considered food was even necessary. It felt obvious now and she felt bad for it, having created suffering in another, particularly in this situation.

"I'm... sorry. For what I did," spoke the humbled shovel witch. Siouxsie turned her head to the side to look at her. "I should have fed you. I... well, I really didn't know what I was doing. With any of this. And... truth be told, I'm sorry I disturbed the peace of your rest. I was playing god. And I blinked." Karolina bowed her head. "I can only hope that you understand and might someday forgive me. I will do my best to somehow make this right for you, Miss Siouxsie." She wiped a tear from her cheek, feeling the redness of her face.

Siouxsie watched. It wasn't clear how much she understood. But Karolina knew that she was at least aware she was being addressed.

Bali and Karolina rose to attention. It was different than simple gibberish. They could see the zombie trying to make words. "What? What was that?" Karolina asked, rather surprised.

The witch and the spider woman shared an excited exchange. "She talks?!" Bali said silently with motions of her lips.

"I... I'd like to... sure. You want to be friends?" Karolina repeated, feeling an old guilt dwindle within her. "After all I did?"

Everyone was all smiles. "Of course, Siouxsie. Absolutely."

They hung around the zombie woman, trying to get her to talk more to them. It was exciting to try. Siouxsie, for her part, was not exactly an amazing conversationalist. Her words were often ponderously put together and while quite friendly, she did not seem to have much in the way of opinions or memory. Karolina attempted to probe her mind for details about all sorts of things, from something as basic as what objects were in the room to what the afterlife was like. Of the former, Siouxsie could vaguely describe shapes, but with no articulation. The barrels and the crates in the room were just called 'box' in her command of language. As for the latter, she simply stared vacantly. Karolina had hoped to hear something enlightening from what was surely a unique perspective, but it was well beyond what the corpse woman was capable of. However, time was growing late and the day had been very long. It was time to call it a night.

"Why don't you head to bed, Karolina? Let's keep Siouxsie down here for now, just in case," Bali whispered. "I can make sure nothing bad happens. And I don't want to leave her alone right now."

Karolina nodded, rubbing her eyes and brow. "I am pretty tired, so I think I'll take you up on that. You're going to be alright staying down here with her?"

"I'll be fine. I don't think she's any danger, really. I just want to be sure. And I think it would be best to keep her company in the mean time. She's probably a bit delicate right now. Oh, and one thing? Can you bring some spare clothes for her?"

"What happened to what she was wearing?"

Bali made a face. "Well, it was soaking wet and to be honest... pretty rancid. I had to discard it. Tomorrow, I'd like to try giving her a bath, too. The rain washed off the worst of her skin stains, but you know how it is."

Karolina chuckled softly and nodded. "Sounds like a plan. You got it. I suppose I'll head up now. And, uh... Bali?"

"Thanks for everything. I'm not gonna lie... I wasn't sure what to think of you today. At some points, I wished you had just returned to the swamp. But you know? I'm glad I didn't say anything like that. Not... meaningfully, anyway. I hope. You're a pretty nice person. This has just been a lot to deal with, is all. And I'm sorry for being kind of a self loathing prick. But I think you really do care about others. In your own unusual way, at least," she said, chuckling.

Bali smiled humbly. "Thank you, Karolina. I appreciate that. I know this must have been a challenging day for you, by the look of things. And I didn't always make it easy, particularly as a stranger from the wilderness. But I thank you again for allowing me to stay the night here. And I try to make a difference when I can. Just remember this, Karolina... some of what happened today, we did together. And all we can try to do is make things right sometimes."

Karolina nodded, happy but tired. "I'll try to remember that. Have a good night Bali. And you too, Siouxsie. I will see you tomorrow, okay?"

And so went the first day and night of Karolina's first positive encounter with the outside world. She felt a weight lifted from within her. The day had been trying, but inside, she felt she had a taste of what it meant to grow as a person and leave the demons and inner shackles behind, at least a little bit. And in so many years, she had never slept as good as she did that night.