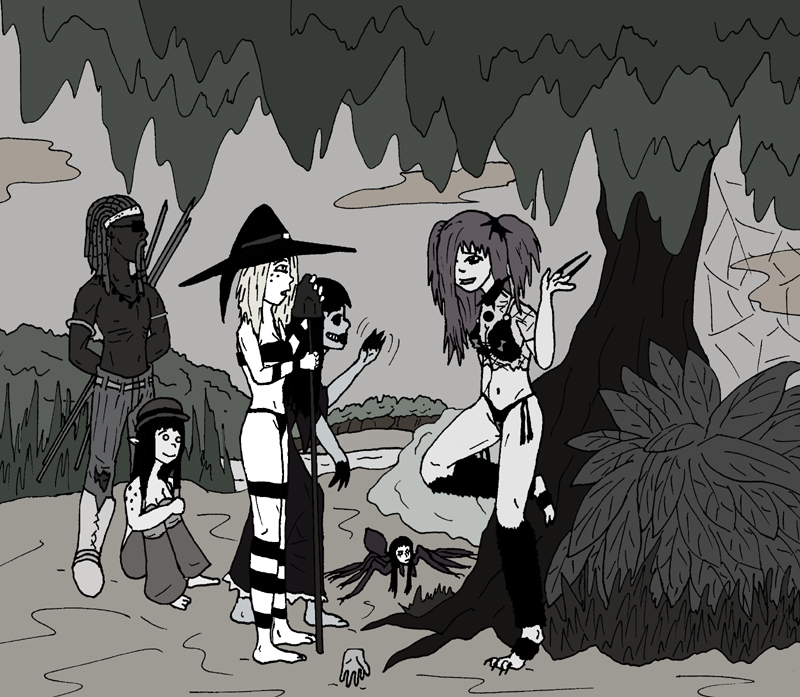 "Ishmael?" said Karolina to herself, curious. It was an odd name for a woman. Then again, she was traveling with a spritely little person named Rottkap, so maybe it was a Xibalban thing? Actually, hadn't she heard that somewhere else before?

The Death Clan grinned, but looked a little embarrassed. "Ah... yes. It's a long story, but I was named in honor of someone. The name itself, as I understand it, comes from a book from the days of humanity's rule."

"It's from Moby Dick," grunted Tulsan, who was listening from behind Karolina, but staring off into the horizon. "My father had a copy at one point. Ishmael is the name of the only character that survives in the story, from what I recall. Hrm. I guess partly being named after a survivor isn't a bad thing."

"Oh yes, that's the one. But I know little of the book, honestly. You can call me Ish or Ishi, if you like."

"Okay. So, before we get going, can you tell me a little about yourself? I don't want to make this an interview or anything at this point, of course... but I'm sure we'd all feel more comfortable knowing a bit about you," requested Karolina.

"That's only fair, I suppose," agreed Ishmael, nodding casually. "I spent all this time learning about you, it's just reasonable to hear something about me. Hmm. Okay, well, what would like to know?"

Karolina thought it over. "What's a Trapper? I'm not really familiar with the whole Xibalban caste structure. I get that it's more of a tribal role than a social station, but beyond that? I have no clue."

"Gotcha. Well, a Trapper is kind of what it sounds like, to be perfectly frank. I catch things. You can imagine how I do it, but I can make webs that are a bit tougher than the average Death Clan and I can make them faster. I can do almost anything with them, really. Nets, ropes, tents... even this shirt and that ratty old cloak were made by me. But notably, I use them to limit who goes where and to capture prey."

Karolina raised a brow. "By prey, you mean animals? Or...?" She thought back to how Bali-la caught Saiya back in the sand tunnel, or the first night back in the tower where she kept Siouxsie from running amok.

Ishmael smiled cutely, but said nothing. The question answered itself through Karolina's expectation.

"I got a question..." gruffed Tulsan, casting a piercing glance. "You're a good hunter, I would imagine. And I can respect that. But can you fight?"

"Well, within reason..." said Ishmael said, trying to gauge where his question was coming from. His face was stern and let on little. She knew more of Karolina than her companions, admittedly. "I'd like to think I'm no better or worse than anyone else? I've been in some scrapes, though. I can handle my own, usually. Don't worry. I'm not going to run unless its needed."

He stared for a moment, gauging her. "And when is that?"

"When the Alpha calls for it, no?" replied the spider woman. "That is Karolina, unless I'm mistaken?"

Tulsan slowly nodded. "Good answer. Alright." After that, he seemed to lose interest in the conversation again.

Karolina smiled at Ishmael's acknowledgement, but she wondered why Tulsan cared in the first place. He made it clear he was just guiding them to Uluru, and didn't consider himself part of the group beyond that. Such a prickly fellow. Maybe he and his cousin were a bit alike. Either way, Karolina liked what she heard so far.

"What else can I tell you? Hmm." Ishmael pondered her introduction.

"How about... what is your interest in Uluru? I know you had some reason or some questions you thought you might answer there?" inquired the witch.

The spider woman seemed to pause a bit. "Uh, well... I'm not entirely sure. It's basically a spiritual quest from my totem, Spider. There's something she wants me to see there, but it's not something I can do alone. I would tell you more, but I ask for a little discretion in this matter, at least for now. If we get to know each other better, I might open up about that. I'm sorry if that's a bit obtuse, but trust me, I have my reasons. It's nothing to do with you, just a private thing. You understand, right?"

Karolina nodded. "I didn't mean to put you on the spot. Fair enough."

Looking momentarily downcast, Ishmael perked up. "I can, however, give you some advice on where you might want to go from here. I don't know how familiar you are with this area, but it's an absolute mine field of danger on a lot of levels. It won't take you to Uluru, of course, but it'll maybe help you get past the worst of this swamp."

Around then, Siouxsie wandered by. Looking the spider woman up and down, she grinned and waved. "Hiiii... you are... not Bali?"

"Hello," replied their guest in a friendly style, observing the zombie.

"No, Siouxsie. This is Ishmael. Same clan, different person," the witch told her.

Siouxsie absorbed the information. And then nodded in a goofy exaggerated manner. "Me know. Hel-lo... new friiieend..."

Meanwhile, the familiars, Tom Thumb and Metis were out with the others, listening in quietly. Around the same time, they happened to glance at each other. Metis, ever serious and holding a borderline scowl, and Tom with his frozen rictus grin.

"What do you make of her?" whispered Metis to her colleague.

"Does it matter what I think?" replied Tom, seemingly less than serious. "We saw her at the camp, but she didn't say anything to us. She's a lot more chatty and cheerful right now, though. What about you?"

Metis stared emotionless. "I don't think any of this is a coincidence."

"Do not speak as though you or your master are dumb. I may have been here for far less time, but I know enough of you through Karolina."

Tom just looked at her, shrugging. "Okay. What do you want me to say?"

Thinking of what to say, Tom acknowledged, "If the spirits have something to do with this, it's none of our concern or influence. How's that?"

Her small eyes stared into him, unyielding. Unblinking. But it wasn't to Tom in particular. It was to Brand, who was likely watching through his familiar. "Whatever you do, do not interfere with her development like your predecessor did. This is the only warning you'll get." She looked at him ominously and then turned to rejoin her master.

Distantly, Brand was indeed watching through Tom. And in a rare moment, he felt a cold chill run down his back, causing him to straighten up. A tingle twitched in his gloved hands. Somehow, somewhere, someone or something... knew what he was and what he was doing. He should have realized it with familiar that the witch summoned. There was something peculiar about it. The fact that it seemed to even let him continue as he was, while Karolina seemed unaware or unconcerned was disconcerting. In the end, he realized his little investment had dangerous caveats.

Rottkap looked happily at the friendly exchange between Ishmael and Karolina, as she sat resting against her knees near the stand offish hunter. "Another new face to help out! Isn't that great, Mr. Tulsan? And a spider lady. I bet Kara will like getting to know her."

He took a moment, then turning to her. "Oh... no?" He didn't think about it too hard until now. Xibalbans came in all shapes and sizes. It was hard to know anything outright certain about them on first glance.

Rottkap made a fake pout. "Maybe I'll grow bigger at some point, but you know I'm fae blooded and came from the mushroom queen. We really don't have childhoods. We're just kind of like... animals, I guess... until something promotes us to be something else or we age out of it. Then we get to be everyday people like you."

He rested against his javelins, taking it in. "Is that how it works? I legitimately did not know that. I think you, aside from Bali-la, are the first fairies I've ever met. Hrm. Sorry 'bout that."

"It's fine!" She obviously wasn't bothered, but just wanted to set the record straight.

She looked up at him again after a moment. "You don't trust anyone, do you, Mr. Tulsan? Aside from your cousin, I mean. I can tell. It's in the way you carry yourself. And the way you speak, when you want to."

He rolled his shoulder, stretching it. "Trust is hard to earn, Rot. I've been around Xibalbans and all manner of weirdness too long to just blindly put my faith in someone. Doesn't mean I hate anyone outright. But yeah. I'm perfectly suspicious of just about everyone at first."

"Even meeeee?" She grinned at him cheekily. "Am I a scary threat, Mr. Tulsan?"

She seemed taken aback. "You mean... before? You didn't trust me?"

"I didn't know what to make of you," he replied, a bit tersely. He settled a bit, catching himself. "You answered to one of the almighty powers of this land and didn't seem to care about anything in particular, like this was all a game. You had no stake in anything, as far as I could tell."

He sniffed. "YOU changed. You acted on your own volition. You don't work for the mushroom queen now, as my understanding goes. And you wanted to be useful. That's more relatable. Whether you live up to any of this, is yet to be seen. But you're on a better path to earning respect, now more than before. Maybe."

"Hm. What about the others then?"

He grimaced. "Too many unproven unknowns right now, Rott. You gotta know yourself before anything else. Look around this camp and tell me who else can say that about themselves. I don't know about this stranger... but the rest of you? I just hope no one gets hurt. And that's the last I want to talk about it."

Rottkap pondered his words. Although he was harsh and to the point, she hadn't thought of things the way he seemed to see them. Maybe it wasn't enough just to have a smiling face and be willing to go along with the greater good. She wanted to believe in the best of others, especially those here. She could only hope her faith in them, was as valid as what she wanted it to be. It was hard for her to imagine otherwise.

[meta] "Ishi" was the last of California's Yahi tribe; see the wikipedia page. My late dad claimed to have met him.