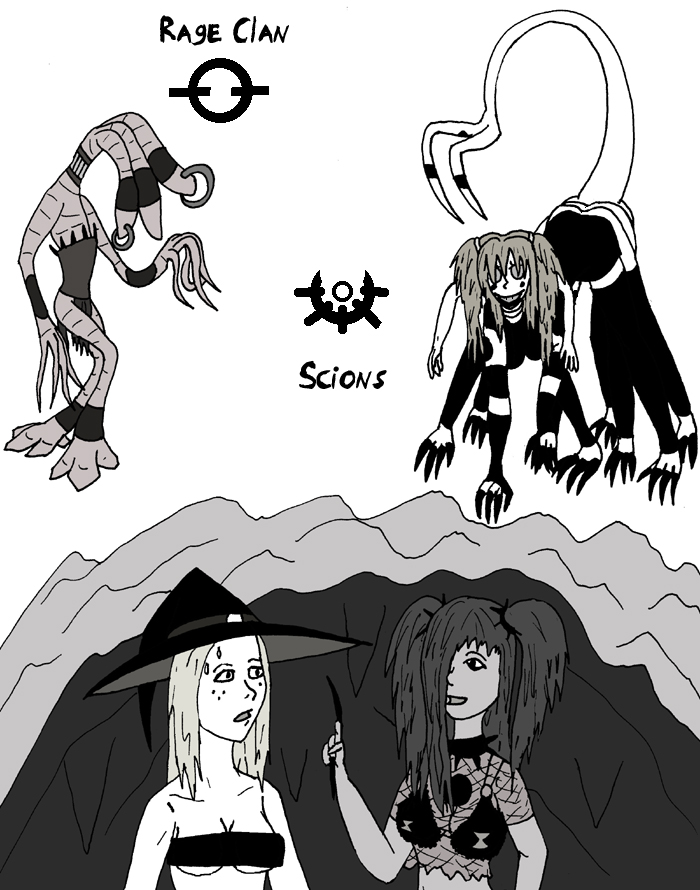 "So, it's like this..." Ishmael began, as she spoke with Karolina. "Up ahead, there are known to be two tribes that have more or less near complete dominance over the area for a bit. They consist of the Rage Clan and the Scions. Are you familiar with them?"

"I'm not too caught up on who is who, to be honest. I assume you mean these are Xibalbans clans, like yours?" asked Karolina, feeling like she was about to hear some unsavory possibilities in their future.

Ishmael nodded. "Rage Clan consist of Xibalbans under the banner of worms, leeches, and that sort of thing. Compared to many, they're particularly inhuman in appearance, often favoring their more totem themed bodies. Now, they're not particularly tough, but they're numerous and they can attack us very easily without our notice. If something goes wrong in their territory, it'll be hard to know somethings up before it's too late."

Ishmael continued. "They attack from the mud and muck, barely coming up for air. Rather than go toe to toe with you, they'll bite at your legs or whatever else is exposed and suck the blood right out of you. Worse yet, they have this analgesic saliva which means you won't even feel them doing it. They basically feed on whoever walks through anonymously. Before long, you're fatigued and sickly with no clear idea why until you step out of the mud. And that's if they let you. Some of them can also make mud traps, quicksand, etc... they're not really a group we can negotiate with, either."

"They sound... lovely," said Karolina sarcastically, blanching at the thought of giant worms sucking her blood. "But why are they called Rage Clan? Sounds like they're more discreet than angry."

"True! The name comes from the fact that when blood essence drinking types get, shall we say, low on their reservoirs, they tend to break out into a feral state. In that mindset, we're like violent uncontrolled animals. We'll attack anything with minimal ability to reason. Hence, 'Rage' Clan."

The witch stiffened, understanding the matter perfectly. "So... what about you, if you don't mind me asking?"

"Me?" Ishmael smiled puckishly. She shrugged. "Most Death Clan are basically vampires. I'm no different in that regard."

Karolina thought briefly back to Bali. She was a shadow essence drinker, although it seemed like the feeding would be done the same way, as she recalled the spider woman bit Saiya the snake woman's neck. The thought of it still left her feeling confused inside. It was sort of disturbing, yet rather intimate. She remembered feeling a bit disgusted when she saw it, but not being able to look away.

Blinking, the shovel witch shook it off, realizing she had been daydreaming for a moment. "Oh! I'm sorry. That was rude of me. Please continue. What was the other group?"

"Scions," replied Ishmael. "Straight up, going through their territory, well... that's a death sentence. Scions are particularly big Xibalbans under the totem of the centipede, typically. They're extremely strong, well armored, fast, and are deadly poisonous."

At this point, Tulsan interjected. "Karolina, just to put my thoughts in here... she's right. If we go through Scion territory, particularly on boggy ground where we'll be slowed? They will literally kill us to the very last. They're like the tanks of Xibalba. I've personally seen one kill several humans and affiliated Xibalbans back in the day, by itself. They have no weaknesses we can work with out here. That hydra monster we fought the other day? Absolute garbage, compared to what a Scion can do."

Ishmael nodded with Tulsan's assessment. "They're hard core carnivores. They rip you apart and feed their brood with whatever is left. Unless we had a Scion to escort and vouch for us somehow, I can't recommend getting anywhere near them. They're basically the toughest of the tough."

"Hang on. If they're that tough and their only competition are the worm people, how have they not overrun things here?" asked Karolina, trying to imagine the situation.

"The Scions are numerous but the Rage Clan probably outnumber them ten to one, I'd think," said Ishmael. "The Rage Clan can't realistically march against them and their numbers are likely the Scion's main food source. Scions are smart enough not to wipe out a resource like that. They're very devoted to their families, from what I've heard. So, they'd want to keep feeding their young. I don't know everything about them, but I imagine the younger ones eventually set out from lairs and find their own way in the world when they're big enough. Regardless, these two tribes have borders through this swamp. Either way is asking for it, I'd think."

Tulsan grunted, not liking the possibilities. Karolina simply held a worried expression. "Geez. How are we supposed to navigate this? This sounds like a nightmare."

"Worry not. I do have a third option that might be safer. At least, by comparison," recommended the Death Clan. "I've overheard that there is a rocky tunnel on the outskirts of their territories. Neither of them control it. If we follow the cave through, we can theoretically side step both of them. It'll also be potentially easier to go through, as the way ahead is much more watery and muddy than where we are."

"That sounds good," sniffed Tulsan, "Although I gotta wonder how you know all of this."

Cheekishly, the spider waved a finger. "Originally, I didn't. But when I was trailing behind Karolina, around when she picked up Beltresz, I was able to listen in on the hive master for the Harriers she was aligned with. They're regular fonts of information sometimes. Scouts would report local geographical findings to him as much as they probably did their chief. My clan works the same way in that regard."

"Damn... you are a stealthy one," admitted Tulsan. "A spider wandering through wasp territory? That's ballsy. I've heard they hate the living hell out of your tribe."

"I never forgot my sense of adventure. I wasn't taught to fear a little risk now and again, you know?" smiled Ishmael. "But that's also one of the reasons I was a bit reluctant introducing myself while Beltresz was around, if you don't mind me saying so. The rumors are true. Many don't like my people, but the Harriers have it out for us. And we're not fans of them either, of course."

Karolina had been listening all the while, thinking about what she heard. "Tulsan, you seem okay with this. Are we going to be able to find a way out of a random cave?"

He nodded. "Eventually. The underground, which we generally call the 'Subterranea,' shifts around even more than the landscape up here does. As long as we keep in mind that we're looking to bypass their territories, it should eventually lead us back out. Frankly, I'd say it's worth it. We're not set up to deal with the Rage Clan or Scions. It's this or we take an extremely long hike around this entire area. And that's going to involve backtracking. Listen... everything in Xibalba is dangerous. You just gotta hedge your bets, rely in your skills, and your allies. There's no guarantees in life. But we have to do our best. My father would tell me nothing less."

Karolina took a deep breath. "Okay. I'm willing to go with this idea. Not my first time in a cave, I suppose. Ishmael, do you have an idea where this cave entrance is?"

"I think so..." nodded the spider woman. "There's a rocky outcropping above the water a short ways from here. My understanding is that's the landmark."

"Good enough," agreed the witch. "Alright everyone! Let's move out! If we can't go through, we'll go below!"