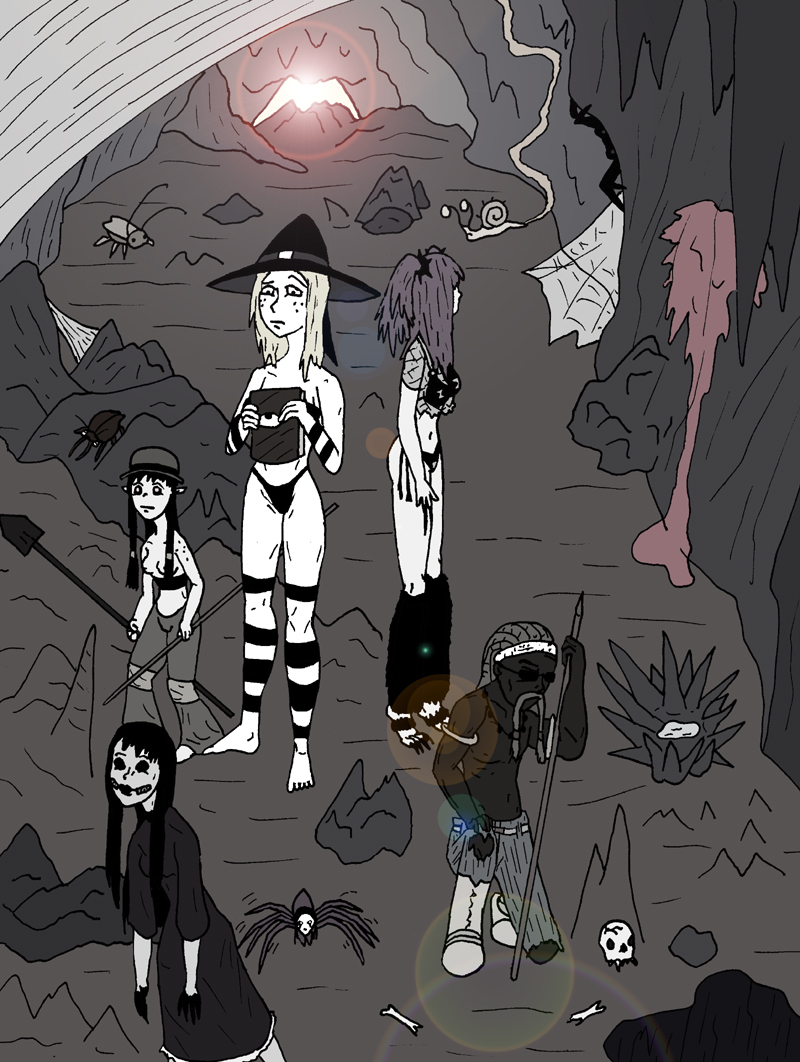 Heading to the landmark, it was not hard to find the entrance. Standing atop a stony throat that reached from the bowels of the swamp, they looked down into the dark depths past the rigid mouth of the narrow cave opening. "I guess this is it."

Cautiously, they entered. For the most part, the witch had traveled upon the surface of the world. Orange skies and a black sun that inexplicably cast light upon the land. One could see birds and horizons. This cave, however, was a gloomy irregular looking tunnel. Cat sized bugs scurried about, hiding or eyeing the visitors warily. A strange blood splatter, not too recent, marked some fight that once occurred here, reminding those who entered that safety was no guarantee. Tulsan even found some marrow chewed bones. They seemed to be indistinctly of some Xibalban origin, as far as he could tell. It was a scene that told an incomplete story, yet spoke all the same that it happened.

The black sun above cast a faint grasping light down into the diagonal throat of stone, this 'Subterranea' as Ishmael knew of it. The darkness within swallowed it whole, unfazed with the power of the distant star. What was down here? It was curiously dry now, but could water have flooded the depths? What of the local rivals, the Rage Clan and the Scions? Even if this was neutral border ground for the two, couldn't they still lurk within, hunting for whatever they could find?

Karolina clutched her book as her team spread out slightly. She looked into the inky blackness which only revealed itself as she wandered further in. This place wasn't like the sand cave by the Longtooths lair. Geists aside, that place felt very natural. There was something about this cave that struck at the witch, something ominous she couldn't define. It was a gut feeling of dread and fear. A casual glance to her companions revealed they were cautious, but didn't seem to feel anything was wrong. Were they more familiar with this atmosphere? Or was there more to it?

Not noticing her spell book's eye staring at her again, a bead of nervous sweat ran down the side of her brow. Everything above, for all the unfamiliarity and challenge, was not to be compared to whatever the Subterranea was. She could feel it in her very core. This was the darkness from which all things were possible and could lurk. Where the shadowfolk like Atacama supposedly dwelled.

She had done nothing more than harmlessly dip her foot in the figurative water of this place, only to realize she wasn't sure how far down the bottom could be. This wasn't a mere cave. It wasn't another hike through the forests, plains, or anything so simple.

This was the ever hungry gateway to the abyss itself. This was what Xibalba really was. Fearful, she felt the omnipresent pitch blackness grab at her heart and lure her further down, as it had done to so many before she was even a gleam in her parent's eyes.