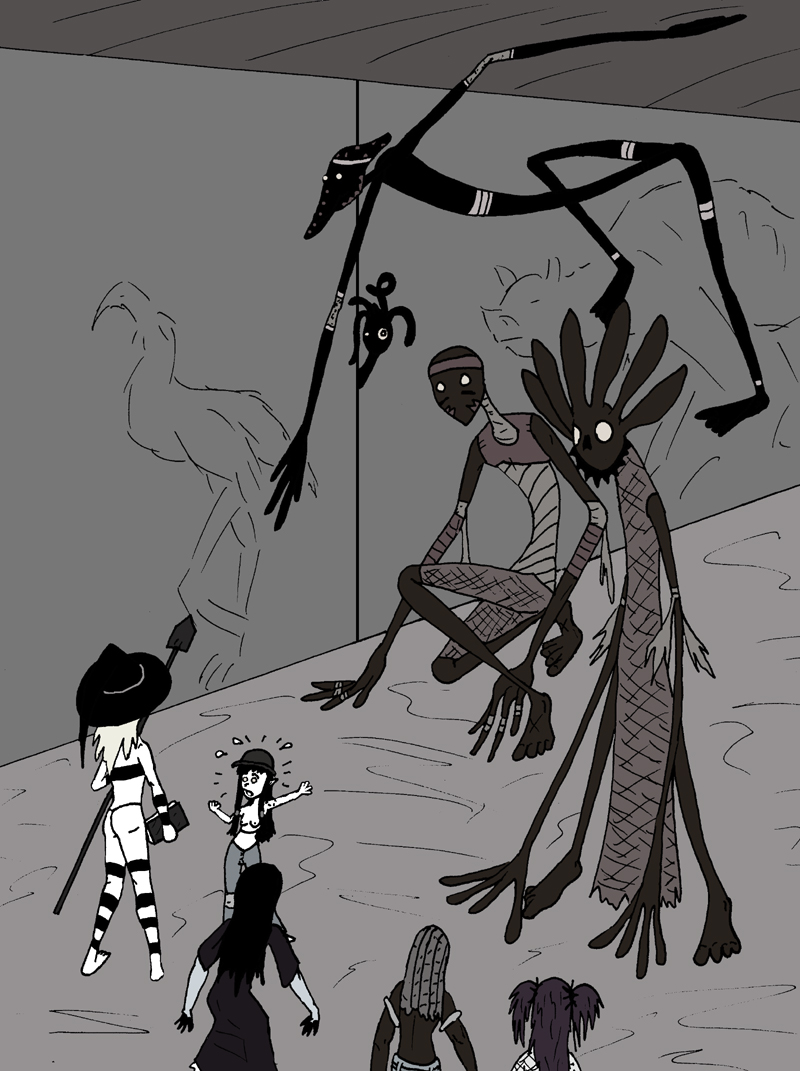 Coming into the edges of their dark vision from further down the hall of stelas, emerged several extremely gangly humanoid forms. They towered over Karolina's party, but instead of being brutish, were possessed of spindly features, except for oversized hands and feet. They reminded Karolina somewhat of the little harvest-man spiders she'd see clinging to the foundations of buildings in Adelaide. And for that, she wondered if these beings were barbarians of the Death Clan.

As they drew closer, there was a sense of weirdness to them to seemed to put them past the more traditional human semblance of those like Bali-la and Ishmael. They all stood around eight to ten feet, almost too big for the hallway, and none of them had mouths. Their eyes were mainly blank, save for a faint orange tone. Their heads were more like masks, with tendril like hair or perhaps a cap of matching flesh. Those who were dressed, wore curious garments of straw woven into netting or banded straps. Further adding to the strangeness, one seemed to climb solely alongside the wall and ceiling, while a tinier one emerged from one of the thin spaces between the stelas to look at them. Occasionally, they made a low burbling sound, but were almost dead silent in their movements, save for the soft patter of hands and feet upon the worked stone. Lastly, there was little consistency between them, despite the broader features they generally shared.

Karolina had no idea how to approach this. They resembled nothing she knew or heard of. Tense, everyone spaced apart and stood wary. Were these beings dangerous? They did not rush at the witch and her allies, and even stopped a modest distance away to observe. But their overall appearance was so human and inhuman at the same time, that it left Karolina and the others at a lack of ease. How could they stand with such rail thin but gigantic bodies?

For a moment, there was a stand off, perhaps with each side waiting to see what the other would do. Karolina gave no orders and the other beings, besides mere burbling, did and said nothing.

It was then that Rottkap raced between the two groups from behind Karolina and raised her hands between Karolina and the strangers. "Wait, wait, wait! Nobody fight! I know what they are now! They're good guys, Karolina!"

Karolina blinked. She wasn't pre-disposed against them, so much as she couldn't fathom how to respond to this situation. "Uh... they are?"

"Yes!" said Rottkap, with excited worry. "They're not enemies, I swear!"

Tulsan stared quietly. "You know... I feel like I know them from something. I've never seen them, but they're oddly familiar."

"Okay, so who are they?" asked Karolina, scratching her brow.

"Believe it or not, but they're kind of like me," said Rottkap. "It didn't dawn on me at first, but I recognize them now. They're called the Mimi. They're like a cross between the fae and spirits. As long as we don't offend them, they're harmless."

Tulsan stiffened up. "The Mimi? Oh. OH! I remember these from my father's tales as a child! If I recall, the legends said that they were teachers and artists for my ancestors. They occupied the land before my people arrived."

"Woah... so these stone blocks with pictures, were made by them?" asked Karolina, trying to mentally imagine these fantastic people as being related to Rottkap on some level. They looked night and day in terms of their differences. But as she studied them, she noted their pale orange eyes, something she had been reminded as being a common trait of the fae.

Clearing her throat and taking confidence from Rottkap and Tulsan's words, she raised a hand to greet them. "Ah, hello there! I'm Karolina. This is Rottkap, Tulsan, Ishmael, and Siouxsie. We were just passing through- we didn't know you lived down here. We don't intend you any harm whatsoever."

"Bubrbrrbbbrbrllll..." It was a string of burbling given by one in a red bandana, in response. She only knew that one said it, despite lacking a mouth, because it motioned assertively with its hand.

"Um..." Karolina glanced to Rottkap. "I didn't understand a word of that. Any ideas?"

Rottkap thought for a moment and then nodded. "They speak a language that was grandfathered in before the Law of Shadows allowed everyone to share a common tongue. The Mimi are an extremely old race, as I understand it. Think of it as your friend Bali-la's name not translating, even though her name meant Bell Flower. She was from a distant age, right?"

"True," the witch agreed thoughtfully. "Is there a way we can understand them? And vice versa?"

Rottkap smiled. "Don't worry, I've got this. I can feel their language somehow... and I think they understand you, they just don't have the ability to speak as we do anymore. Anyway, he said, <Hail. It's a pleasure to meet humans and Xibalbans together. We haven't seen such a pair in a very long time.>"

Karolina smiled and things calmed down. She really appreciated having Rottkap around right now.

"Okay, let's see... uh... the pleasure is all mine. We are on a journey to seek out the 'Navel of the World', Uluru, as a promise to a late friend of ours. My friends and I are trying to avoid the dangers of the swamp above this place and we heard this might be the safest path. Because they're doesn't seem another way around, would it be possible if we could pass through? We won't bother you or damage your artwork, you have my word."

Rottkap continued to act as an intermediary, enjoying her new usefulness. The beings seemed to burble at each other and then back to Karolina and Rottkap.

The fairy looked to Karolina. "They say that will be fine, but they would like to meet with us, as they don't get visitors much. If we agree, they're going to hold a party for us! Further, they're also interested in Tulsan's necklace and would like to examine it closer. They described it as a 'piece of history'."

"Interesting... I'm certainly intrigued. And maybe they know something about Bali's necklace. We know it's a link between early humans and Xibalbans here, as well as a tool or key to enter the DreamTime... maybe these teachers can show us a thing or two. What say the rest of you?"

"You know I'm on board for this," grinned Rottkap.

"You had me at party," chuckled Ishmael. "In all seriousness, though- positive encounters like this can be rare, particularly in the Subterranea. In so many ways, I think this could only be a good thing."

Lastly, Tulsan nodded. "I'm definitely interested. I didn't even know these guys were real, as opposed to a fairy tale. Yeah. I feel like I could learn a lot here."

Karolina looked back to the Mimi. "We happily accept your kind offer!"