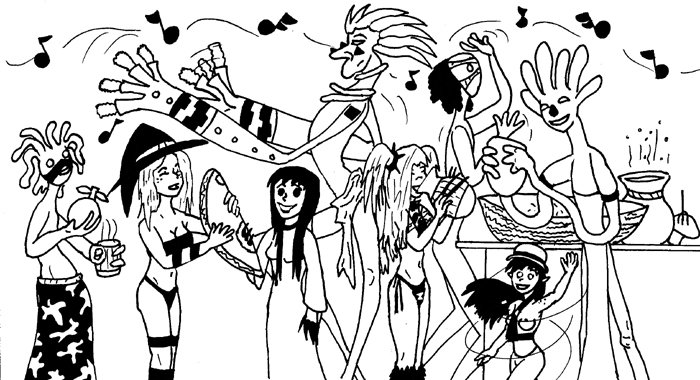 Led through a series of side passages composed of a network of their stelas (some of which rotated, acting like secret revolving doors), we were introduced to a wider chamber where many of the Mimi people were already dancing to the sound of flutes and drums. I was surprised we hadn't heard a thing until we arrived. Maybe the stones sound proofed the main hallway?

"This looks pretty lively. There's already a party going on? I thought the idea was that they were going to hold one for us," Karolina asked Rottkap.

I could see she was curious as to the nature of this, too. My little friend inquired of the hosts that escorted us here, who responded with their quirky burbling fae language.

Looking back to me, she smirked in amusement. "Apparently, they just like to party on a regular basis. Only now, it's being conducted in our honor, so they're going to spread word about our arrival. One of them said we're free to enjoy the food and drink here as we like. The only rule is there's no fighting."

"Sounds like a good time to me. Let's mingle," I said. I couldn't tell you the last time I went to a party of any sort, to be honest. Sometimes the neighbors would visit my family during birthdays and we'd hold a little get together, but I'd never seen anything like this. I suspect the version of me that Bali met would probably be a bit shy and awkward about something like this, but I'd like to think I've loosened up a little since then. And I think I was also trying to keep myself distracted. That dark sensation I had entering the cave mouth was absent here and I was content not to find it terribly fast, you know?

As our hosts joined the crowd, I saw more of the Mimi. They were all very distinctive, with almost no rhyme or reason to their appearances, except for their extremely lanky bodies. Some were much shorter than the ones who intercepted us, while others seemed almost alien in appearance. But many of them seemed to exude a sort of love of life. I could feel it as I watched them dance, unconcerned of judgement. I bet Bali-la would have loved this place. Outside of the fight in the sand cave, I never really got to see her dance, although I knew she enjoyed it.

The Mimi seemed to regard us with kindness and just treated us like we had always been here. It took some getting used to, as I expected something more guarded. Although they did not speak to us directly (they were probably informed that Rottkap was our translator), they waved, smiled, and pantomimed simple expressions. Without even introducing herself, one such Mimi gifted Siouxsie and I a gigantic slice of cantaloupe. Our mouths watered at the sight of such a generous helping of fresh fruit.

She looked at it gleefully, regardless of the terminology, and slashed a piece out with her claws. "Meat froot!" Come to think of it, I don't think I ever really saw her eat something that wasn't meat before. She never showed interest. Or maybe I just never knew otherwise about her. I watched her eat a piece, wondering if she would spit it out after realizing it wasn't actually meat. But she didn't notice or care. Taking a bit for myself, I had to admit, it was really good.

Rottkap practically threw herself onto the dance floor, spinning and twirling about. She was actually quite good at it. Certainly better than anything I could do. And for a time, Ishmael joined her. At least until one of the Mimi brought her a bronze pot of what I would learn was some kind of spiced sangria. She did not hold back on that thing! I don't know where she put it all, either.

I was rather happy to see most everyone relaxing and enjoying themselves. And I fully intended to join in on a bit of dancing... perhaps after a drink or two, though. I put my trust into Rottkap's words that these were decent people, and I think I relished an opportunity to enjoy myself and not be in a spotlight of sorts.

Around now, I noticed my familiar wandered off. I could sense she was around one of the food tables, though, so I wasn't too concerned. She seemed more interested in the meat and mushrooms than the festivities, from what I could gather. It wasn't hard to imagine that something so small and well, eight legged, wouldn't be down for dancing or drinking, I guess. Hey, more power to her. I was still trying to get a feel for what Metis was about, so I didn't want to bother her too much.

I also noticed Tulsan wasn't getting involved. Pity. I think it would have been interesting, if not amusing, to see him dance and loosen up. I noticed him standing with some other Mimi who were examining both him and Bali's necklace. He glanced at me and motioned that they were going to step away from the party. I knew his interest here was more academic than a leisure break, so I nodded. Still, part of me wished he would step away from that stern demeanor of his for a bit and just hang out with us. He always seemed rigid and practical, so it made me wonder if he really didn't like being with us. I also noticed he seemed a bit uncomfortable with me in particular after we got my spellbook back from the angel. It wasn't anything he said, but I could pick up on it. I just wasn't sure why.

Before long, Ishmael handed me a drink and Rottkap took our hands to dance with her in the crowd. And they were right. It wasn't time for self reflection, but to have a little fun. There was no way to know if I'd ever meet such people like the Mimi again or their brand of hospitality, so I didn't want to waste it. If just for a little while, I wanted all of us to be happy.

Hey everyone. It's been roughly a month now. After thinking it over, I'm making an attempt to get back on with the story, but it has to be with some changes. Simply, I can't keep up with some of the artistic work that is involved these days, so the webcomic is going to take on more of a basic line work appearance, with little more than a black and white fill. Basically, I either had to make some kind of concession about the demands of making this or abandon the project altogether.

That said, I'm stubborn, I get restless if I don't create anything, and don't like leaving an unfinished work if I can help it. I also more prefer telling a story as my personal focus, as I don't consider myself an artist. So, the webcomic might not be as pretty, if it ever was, but at least as this, Arachnid Goddess 2 can continue. I want to continue telling the tale of Karolina and her friends and I hope you'll continue to stick around too. If not, I understand. -Chern

It's a well-deserved interlude! They deserve some R & R.

Right? Gotta have some kind of respite on occasion.